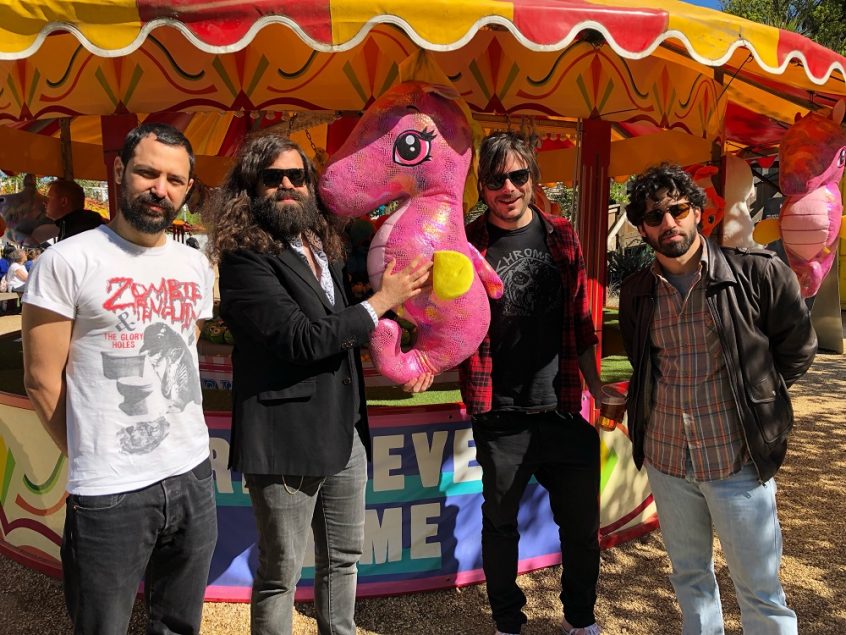 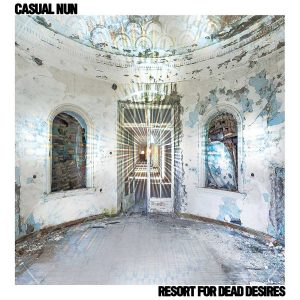 Great band names come around quite a lot, and this one is no exception. London’s (by way of Greece) Casual Nun could sound like anything due to their moniker and on this, their third record, Resort For Dead Desires, they play with the notion of genre, crafting something over these 9 tracks and 33 minutes, that fits the spectrum of chaotic, thoughtful, reflective and incandescently abrasive all at once.

Opening track Party Favors, is a jazzy number, of psych-rock jamming, bringing to mind the experimental oddball nature of Comets On Fire but with a more punk rock attitude. Zoetrope expands on this, constantly building on these raucous, teeth-rattling drum patterns, howling guitars, coated in waves of hissing feedback and bending noise, whilst the guttural vocals are a strained spit of venting, ecstatic joy and desire.

The roaring howl of Sleet Knife is all rumbling bass thumps, to begin with, before morphing into this crusty barrage of Lightning Bolt-meets-Torche bomb-string noise-punk of swirling destruction, with a heavy amount of squealing electronics and garbled, maddening shrieks. The 5-minute scourge of A Light Plague is like a John Dwyer project in overdrive, tearing around the town, smashing mailboxes off of poles with a huge fucking baseball bat. What I mean is, it’s obnoxious, furious and crushes several empty beer cans into your head during its tour-de-force of frothing, aggressive partying. If there ever was a circle pit anthem this year, then this is it.

Things begin to calm down with Panas, Tejas, which feels like the sound of a dream – it resides in the spectrum of ethereal drone, bringing to mind the work of Stephan Mathieu and his Before Nostromo project. This then flows into possibly the weirdest track on Resort For Dead Desires, Rabbits, which continues this drone-theme to noisier levels, with this reverb-drenched spoken-word piece about “rabbits living in my head“.

The smoldering hum of the cryptic bass, rolling percussion and echoing vocal theatrics set Heavy Liquid apart from the fist-to-the-face rage of previous tracks; not that it’s any less weird – in fact, it’s more unnerving, especially as the last 30 seconds fade out, only to erupt back into a Harvey Milk-style outro of snarling victory.

On Resort For Dead Desires, Casual Nun are not afraid to experiment and set fire to the box – tracks like the chanting see-saw wander of Pink Celestial Heron to the squealing, balls-out raging soundstorm of sludge-rock closer Amulet all showcase just how exciting, experimental and deadly the noise rock template can become if you delve deeper. This is a fantastic record and gateway record into deconstructing and discovering the twists of the harsher, more abrasive end of the punk and metal spectrum.

You can stream Resort For Dead Desires by Casual Nun below or buy from their Bandcamp or Hominid Sounds on sexy black vinyl.