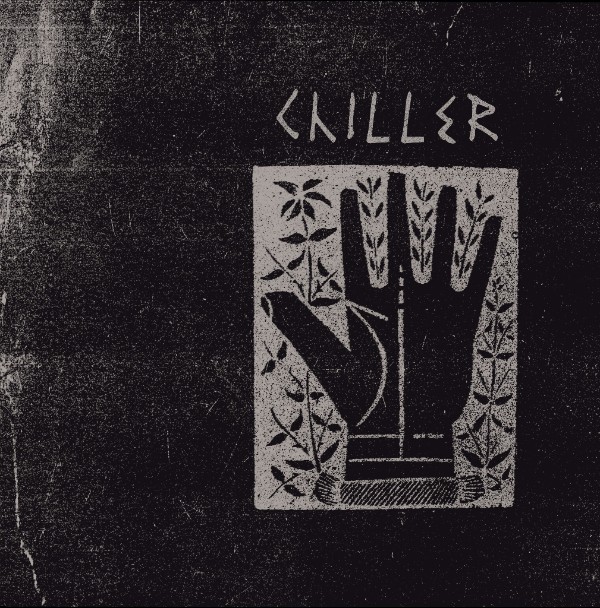 There is a weird coldness to Chiller‘s sound, making their moniker surprisingly apt. Featuring member’s of Feral Trash, Black Tower and Mother’s Children this Canadian four-piece are a somewhat of a super-group in the deep underground of the punk rock world. A film-noir cloak envelops Chiller; from their quirky, irregular sound, to the sinister simplicity of their album cover and logo – which brings to mind a Jo Nesbo book about someone who cuts off people’s hands and probably sews them together, or something equally weird (note: I’ve not read any).

The off-kilter indie-punk jangle of opener, Agony, has a haunting 90s-style melancholy to it. Especially on the crooning, chest-pounding chorus, where the dual-vocal overlap is used to terrific effect and will go on to feature on the remaining 7 tracks that make up this self-titled effort. The call and return male/female vocals on the Son of Sam Heretic should be enough to touch your heart, especially the frantic and grasping way the track’s title is spat in the song’s thrashing coda. The guitars chime and belt out a crisp, sometimes buzzing racket and it fizzes with determination and raw feeling. The pacy Offred, launches itself forward through a twisting and teasing grunge-indie bounce, with the back and forth vocals, which seem to reference a lost spirit or an apparition. Like many of the tracks on offer, there is a pensive and solemn tone hidden beneath the breakneck three-chord attack. The spaghetti-western style intro on the noir-sounding Satisfied is superb and evolves into this snotty, brackish tune, that berates the listener for swallowing lies and ultimately, accepting desertion.

The emo-rock of the solitary Strangers changes pace for a bit – vocals drip with desperate loss, radiating this forlorn longing, cries of never-ending pain all backed by this gloom-drenched, fast-paced Alkaline Trio maudlin punk. The chorus is also absolutely huge, cries of “STRANGERS! STRANGERS!” is so deliciously pained (and catchy) it sounds as though he could have fallen off the soundtrack of a certain 80s inspired sci-fi show that’s pretty popular at the moment. Crank it to 11.

Absolutely absorbed by the glowing, Cold Cave gloom on the dramatic Unanswered – “Someone tell me, why? WHHHHYYYYY???” roars from Chiller’s mournful lungs, coupled with some beautiful backing vocal “woohs” concluding with a flourish of rain-drop-sounding keys within this wistful and heavyhearted scrawl of chewy, post-punk spite. Don’t be fooled by the high-noon-esque intro to closing track, The Void – the 20 seconds of wistful guitar strokes are trampled under hooves by a stampede of rapid fire punk rock. Lip-curling vocal snarls, crunching chords and bruising percussion thunders past in a breathless, scrappy exhaustion of sound.

Chiller’s debut is rough around the edges, but that’s what gives it that certain charm. Through these 8 tracks and 24 minutes they incorporate enough styles, menace, aggression, loss and love to pique your interest. A promising and sharp-sounding debut.

Stream Chiller’s self-titled album below. Physical release out on 2 February through Rockstar Records, pre-order it here.