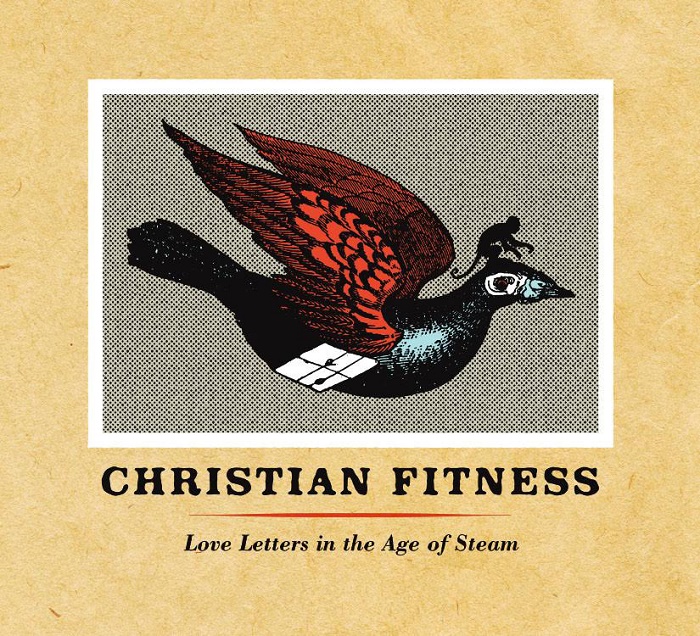 “Unauthorised copying, hiring, lending, public performances and broadcasting of this recording is predictable and disappointing” reads the message scrawled on the back of the second Christian Fitness album, Love Letters In The Age Of Steam. God bless you, Falco. If you don’t know (and why not, you complete flannel) this is the second ‘one-man band’ outing for Andy Falkous, peddling more of his acidic wit and coarse riffs into your ears. Those who experienced the outpouring of dry humour and braying distaste on the debut, I’m Scared Of Everything That Isn’t Me, will notice that on  Love Letters… everything seems a lot more sharper, jagged and coated in an evil oozing slime and darkness creeping in at the corners.

The buzz-saw guitar whine on opening track, Upset Army; a 2 minute blast of agitated noise-pop, is noxious and joyful – like a crudely painted smile on the face of a dying clown, it soon starts to decay in the heat of the burning amps. The lyrics bring to mind that Jam sketch about the bloke who decides to have his funeral because “his life is so good” alongside the chant of “you’re probably next, you’re probably next, you’re probably…..NEXT” and it feels like it could slot in on My Pain And Sadness Is More Sad And Painful Than Yours without any argument.

On the weirdly titled dark-post punk romp of All Ghosts To Medicine Counter Four, strange present ideas are thrown into the mix “I got you a prayer book, with a forward from Jeffrey Archer…” whilst Falco’s incandescent rage builds between the two repeated verses. On the first, he’s pretty calm and matter of fact but by the second, every word seems to finish with the middle finger raised and a joker-like cackling scream. Good luck removing the song title from your head – fiendishly addictive and wonderfully delivered. This brings me to The Good Sword, which shares a similar addictive trait of becoming your new favourite ear-worm. The skill in writing a killer hook and the kind of lyrics that keep you awake at night is something to be truly envious of. On The Good Sword, there’s a possible social commentary woven within the lyrics about us, as consumers, wanting everything at once: “meet with your darkest fears. Lie with them in their dead dimensions. Everything should be happening now.” In fact, the chorus goes far to confirm this, with the mantra “indiscipline, indiscipline competing with your manners” chanted in a warped falsetto over scrappy punk rock. Justifiably miffed and perturbed.

On  Love Letters In The Age Of Steam everything seems a lot more sharper, jagged and coated in an evil oozing slime and darkness creeping in at the corners…

That faithful throat-clearing bass sound opens Three Speed Limiters, gurgling and cackling a wailing cry of dishevelment and frenzied elation alongside the Dischord-style riffs and Falco’s razor-sharp yelp, which reaches peak schizophrenia in the last 30 seconds, as multiple vocals interlock and bury each other beneath cries of “GRAVE! ANIMALS!” whilst the chugging industrial pound of the creaking riffs and militant drum beats continues until an abrupt close.

“I’ve got a part, in a fuck off play as a concept!” Roars Falco on the noise-punk smackdown of the title track – a bristling, rage-fuelled blast of mclusky-style hate-rock smashed apart in under 2 minutes, with a bucketload of handclaps. The Harder It Hits, is delivered in another creepy falsetto – Falco, reaching the kind of  sing-song tone reserved for madmen and final stage end of level sub-bosses. The bass work on the chorus is pure sludge – a speaker-busting, crackle of stuttering, filth akin to the guitar shred of Josh Scogin’s ’68.

There are moments of peace, if you consider peace being heckled only frequently, compared to every waking moment. The piano-led ballad that is Standard Issue Grief, sounds like it should be sound-tracking a warped version of the Christmas John Lewis ad (the bells at the end make it) along with the bizarre closing mantra: “the last night that I will love my shadow, will be my last nigh on earth.” Chilling but also beautiful. The Physic Reader is a sweet-sounding synth-pop-number, built around a flowing electronic wave and Falco’s distorted and stuttering irregular vocals as he laments how “our dreams are far too middle class.”  It brings to mind the sombre French Lessons  from How To Stop Your Brain In An Accident but with more Ribena and less 12 hour drinking sprees.

Give this man your money now. You can order Love Letters In The Age of Steam on CD for 8 whole English pounds or digital download of 6 pounds. Do it, you’ve got nothing better planned.