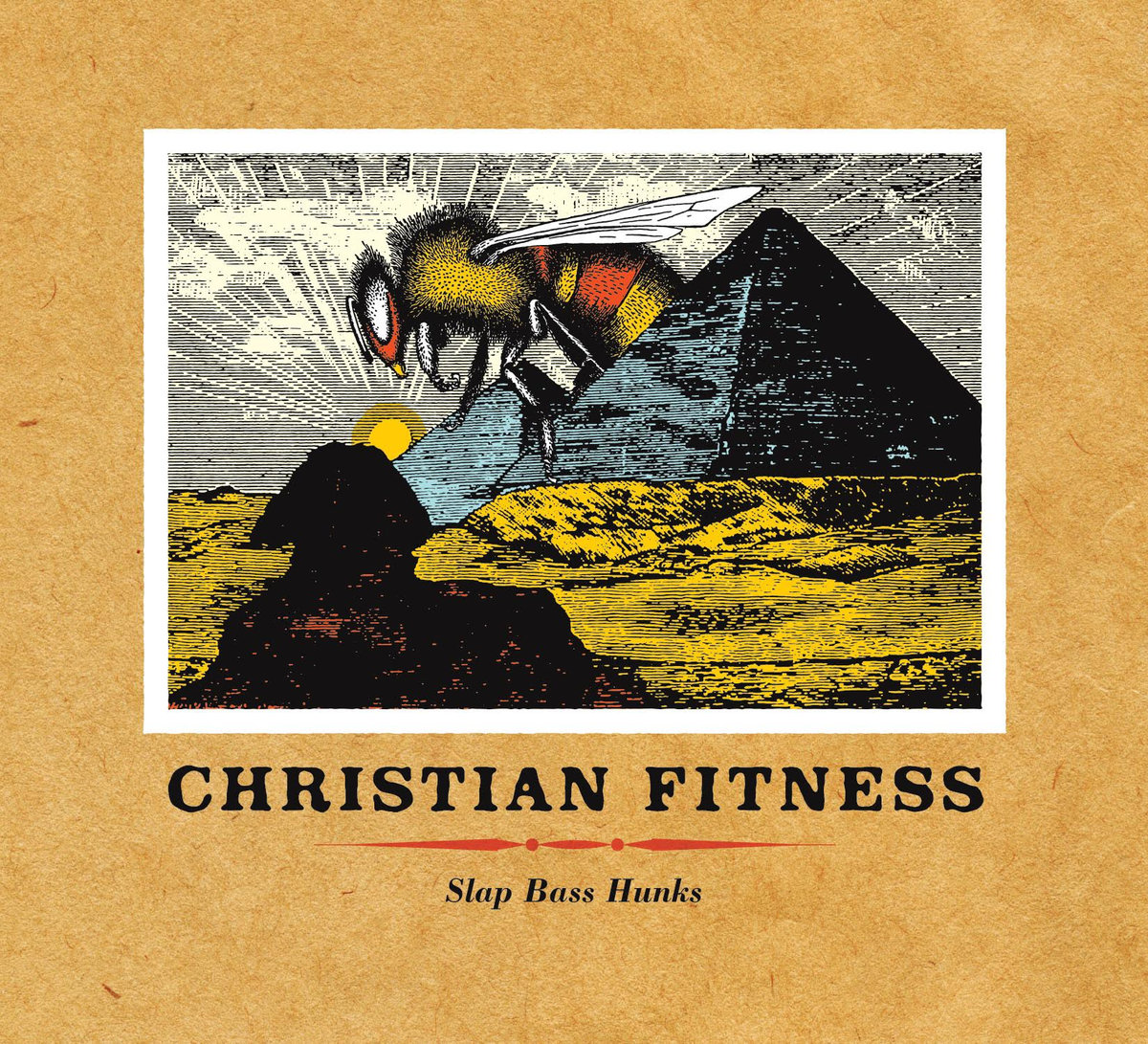 “Nobody likes a snitch.”

Staring at the cover of Slap Bass Hunks, (the fourth album from the ever-prolific Christian Fitness, aka, Andy Falkous) I’m convinced that it’s some kind of ‘Black Mirror’ vision of the future, where the uprising happens and we succumb to our great bee overlords. It also reminds me of Futurama for some inexplicable reason, perhaps because I’ve been watching it lots recently, and every episode seems to include some kind of bizarre world-dooming plot line. Plus, there was an episode with giant bees.

Slap Bass Hunks feels a lot more joyous than the scathing This Taco Is Not Correct, (which was only released in September last year) and is something that I feel could definitely be replicated in a live setting, should he feel inclined. This isn’t to say it’s any less weird than the rough and ready debut I’m Scared Of Everything That Isn’t Me or Love Songs In The Age Of Steam – in fact, there’s such a burning and immediate headrush to all the tracks on offer, it’s difficult to know where to start; they’re all clambering for position, handclaps ahoy.

“Family courts – I admit it, I’m still on the sauce…” states Falco on the opener, a disjointed and beautifully off-kilter affair of bending bass notes, tons of rolling drum fills, a comically macabre moment of a keyboard-led break, coupled with some high-pitched humming and questions about owning your own soil, before it crashes headlong into the skittering post-punk shuffle.

What sounds like a load of kazoos being sacrificed, whilst a guitar is thrown in the air for 2 minutes and scream of “SLAP BASS HUNKS IN HOME MADE CANOES!“, the title track will definitely paint a ridiculous grin on your face. Possibly the most savage and rending track on offer; this thunders past on a wave of crunching, broken distortion, scything guitars that wails like a screaming wall with a fuckload of handclaps thrown in for good measure and displeasure over our current political climate. Magic, utter magic.

It took me a while (and a lyrics book) to realise that Falco is shouting “YOU OX!” and not “YOU AUKS!” or even “YOU ORKS!” on the unrelentingly jaunty and sarcastic National Insurance, in which putting in the hours is discussed, with the ultimate conclusion that it gets you nowhere (but hey, you look good in a vest). There’s also some great back-and-forth vocal interplay, bizarre impressions and that sense that you’re being laughed at with utter, utter contempt throughout, but do you know what? It’s fun and that’s what I’m taking from Slap Bass Hunks – this is a “fun” album, born from a sense of a splintered narrative and grim determination mixed with achievement.

The narrative that makes up the Twilight Zone-esque paranoia of the superbly titled Footballers Have Feelings Too is so off the scale in weirdness, it’s reached the ‘other side’.  Whilst this tale of a life unraveling is supremely odd and fascinating, it’s also hilarious, especially the delivery of the line “Jane’s husband is on our storm porch waving around a picture disc of Megadeth’s ‘No More Mister Nice Guy‘” this is all backed by the steady rolling drums of Mr Jack Egglestone and that gurgling, throbbing bass tone, that’s churning up great vats of silt, whilst that creeping keyboard tone chuckles to itself in the background. It’s the line “whilst dressed as Stan Collymore…” that’s hilariously compelling and the way the song takes such a drastic lurch in another direction, adding to the carnival of comical chaos that Falco has created.

My one pet peeve is the shortness of the bouncing fuzz-punk clapping of Hallowed Be Thy Naming Rights – with it’s talk of hiding corpses in the base of a wheelchair, discussions over an Anglican mouse and French kissing, this is 1:46 seconds of perfectly crafted brilliant nonsense that keeps making me think of Fievel from An American Tail if he’d started a punk rock band.

I’m convinced that the coda to the humming computer breakdown of Nobody Likes A Snitch is more a threat than anything else. Whilst, it’s just the title of the song repeated over and over by a sombre-sounding Falco (and is only just barely audible over the scribbled noise of crashing sounds) – it’s as if he knows you’ve sold out, you’ve made a deal – you’ve sealed your fate and that creeping bass-tone of dread is ready to envelop you.

This is unlike anything you will quite hear this year – from tales of bees being elected, to hating puppies, to dining in Greggs and of course, closing borders – Slap Bass Hunks is the anti-everything and vicious stream of jokes we need in these grim times and it will definitely improve your life somehow. Possibly. Just hand over 8 quid already, you bunch of total fucks.