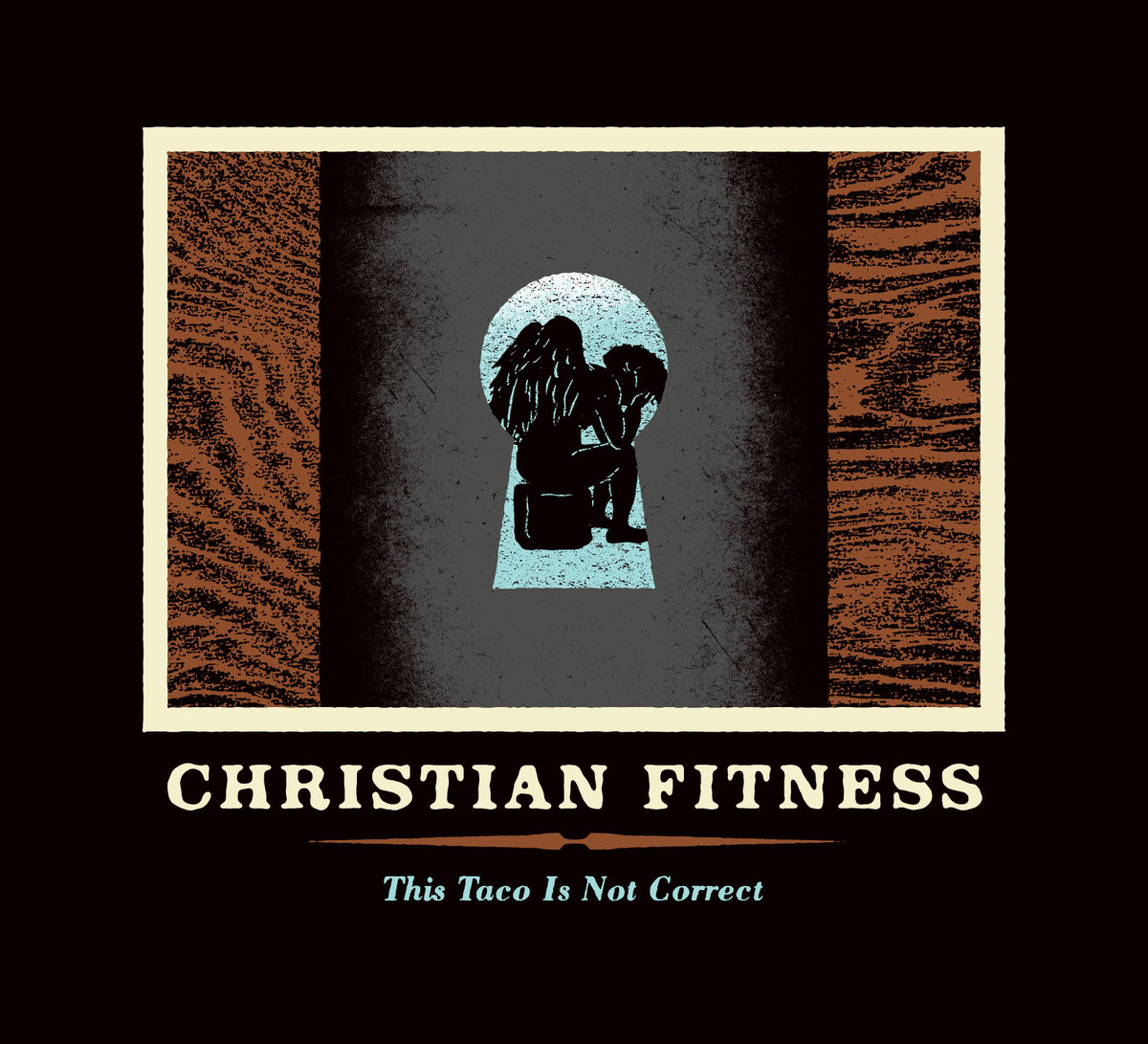 Band: Christian Fitness
Album: This Taco Is Not Correct
Label: Prescriptions
Release date: Out now (Download and CD – bandcamp)
Sounds like: Ray Winstone wearing ear-rings in the bath. Shouting at a train.

“Yeah, and as I say, have you seen the way fliiiiiiiiiiiies congregate around a corpse?” Is the line that opens the third album by Christian Fitness (ripped from the mouth of radio shouting man, Jon Gaunt). If Andy ‘Falco’ Falkous steps further into the darkness he’ll soon cease to be completely in “our world” having created his own noxious and cackling dimension of gleeful acidic wit. Those familiar with Falco’s Christian Fitness project (one-man band) will notice the amount of ‘beef’ that’s been siphoned into This Taco Is Not Correct – (and I mean beef in the sense of SOUND and not the meat product, although we are talking tacos here so…maybe it’s both?) Yer man Jack Egglestone hits things on this, making it close to a Future of the Left album as possible, without ACTUALLY being a FOTL album.

This Taco Is Not Correct kicks off with the spitting and brief two-minute punch of Donald Got A Train – an abrasive, stocky blast of thick punk rock noise, with the added melody of “Da-da-da-da-da-Donald got a train!” thrown in for good measure alongside guidance on why you shouldn’t bait a happy bear. As Happiness Is Not For Amateurs (as discussed briefly) slithers from the speakers, uncoiling like some venomous serpent, the fear begins to set in. Falco’s almost spoken-word drawl is hypnotic, caustic and other words ending in ‘ic’ right to the very core. Guitars squeal as though they’re being stripped and flayed alive, whilst the grinding bass thumps along in the background. It should be noted, the inflection Falco puts on his voice during one of the most lengthy diatribes on this, is particularly malevolent and contorted. Possibly based on real life events – experience below:

“I once paid 15 pounds to sit on a train and listen to a racist abuse a Chinese family as we crossed the Tyne bridge, and nobody said anything (so I did) and it went wrong and I ended up sitting back down for the last couple of minutes of the journey, feeling like a cunt, not one of those nice ones…”

Thick with distortion and dry biting wit; this theme continues with the braying laughter of Your Favourite Band Wants You Dead; where the lines between reality and an alternate dimension begin to blur, where nothing is as it seems. Bit like visiting your Auntie in Slough. “Your favourite song is a lie, it exists purely to flatter itself/if you pull it, it falls apart in your hands…” states Falco, dismissing and disintegrating all you hold dear, backed by the sturdy and unrelenting bass-grumble. “Your favourite band liked you better when you didn’t exist…” he mockingly intones, rounds off this perverse and dismissive blast of scrawling, scribbled punk rock disdain.

The 71 second bombardment of fuzz-punk that is Direct Debit With Ray Winstone’s Disembodied Head (complete with a joyously mangled Flintstones Theme solo on the second verse) is just as warped, fun and noisy as you’d expect, whilst the eerie, Twilight Zone-tinge of I Swear I’ll Get Married In Those Ear-Rings, is a keyboard-led piece of macabre shuddering dread. Falco’s voice has an oily, slithering tone (think League of Gentlemen-style creepy) and the swirling, desolate synths have the right mix of soothing and “the walls are melting again” nightmare-tendencies. Good.

We again attack the bass guitar with several drills, creating a shrieking, creaking rasp of angular, disjointed post-punk spittle on The Tides & Jabs of Staying Hairy – which is gloriously savage and includes the brilliant line: “she practiced being evil for a while as a form of self-defence…but she was shit at it…” followed by the echoing lines of “she didn’t convince…she didn’t convince…” all backed by this gurgling bass creak and the marching smash of Jack’s drumming, which lurches this track forward, like some jerking, haphazard B-Movie Godzilla, mashing through a cardboard city.

Amps are overloaded, ala ‘68 on the noise-wreckage of the superb Bad Boys Die In The Bath (you can almost feel the heat as it starts popping and hissing from the roaring strangulation that’s created) whilst the swaggering nonchalant of the hilarious and cutting bite of Reggie Has Asbestos Training is summed up by the immortal line: “the proof is in the pudding well, the pudding was made in a shit oven by a donkey cock fuckwit with half the world in its petty-hate petting zoo and if that sounds like you, it’s not.” A mostly spoken word piece, with Falco reciting the song’s title over Jack’s upbeat percussion, whilst some smooth synth-flows, buzzes and hums in the background, like some weird 70s-style novelty theme song from a show based on the life of the titular Reggie. What is going on here?

I’m pretty sure you will never hear the line: “I won’t be the cause of an opportunist monument infringement” in any other song this year (or possibly in our doomed planet’s lifetime) save for No Skin For The Skin Eaters, which rounds off This Taco Is Not Correct. A bizarre, upbeat, scuzz-rock bounce of Jarcrew-esque noise-pop, as Falco muses about the complications of holidays and whether it’s a good idea to stray from the tour group, no matter how much she flirts with you.

Music to soundtrack performing unnecessary surgery on your worst enemies – gleefully corrupt, perverse and fucking hilarious. This Taco Is Not Correct is available from bandcamp below on CD and download. Treat yourself.