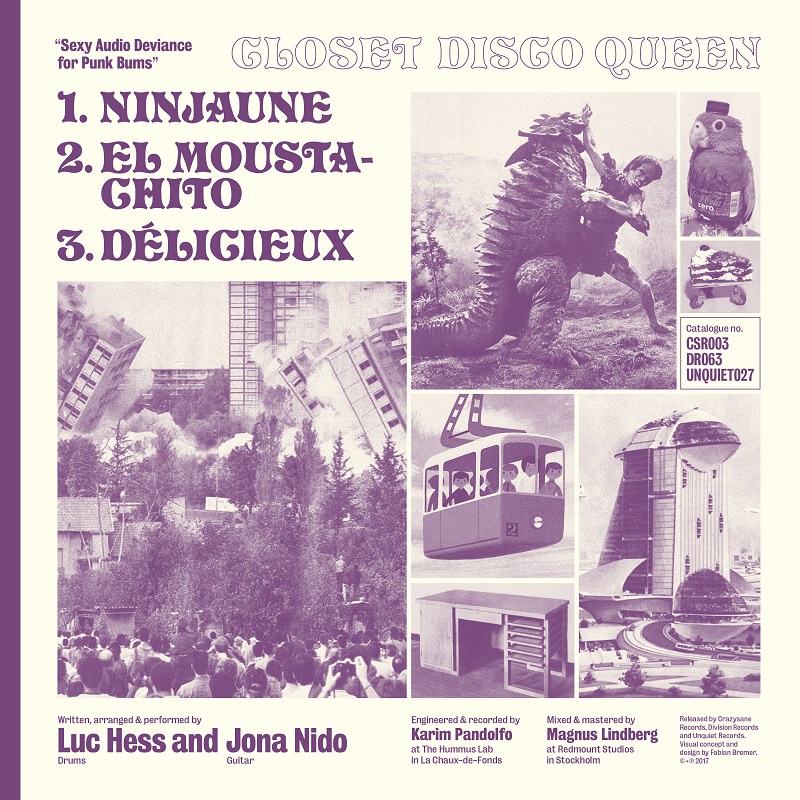 Now, that’s a great EP title, seriously – well done the lads from La Chaux De Fonds. Closet Disco Queen are on some kind of bizarre quest to make sure you’re dripping in sweat. No, not through fear, but through their turbo-charged raw, untamed power. Hot on the heels of Black Sorbet, the monstrous 6 minute party-slammer from a split they did with HEADS. released last year; the power duo from Switzerland have returned with more riffs and even more delirium with this new EP. It’s somewhat amusing then, when CDQ throw a bit of a curve ball with opener, Ninjaune. Those expecting a teeth-rattling, jaw-dislocating punch to the face are met with an atmospheric, space-like trance of brooding noise and muted drum beats. What’s going on? This doesn’t last though; stumbling out of the blocks, the patterns become more complex; layered and twisted as the guitar takes a sombre, post-metal tinge, dipping into some taunt Russian Circles-esque howling.

You see, Closet Disco Queen don’t want to explode right away – they’re here to tease to begin with and Ninjaune does just that. By the four minute mark, they’re well into their groove with some stalking, menacing-sounding and weirdly flamboyant riffs, coupled with the persistent cymbal clattering joy and this straining, unrelenting urge to break free. Speaking of which, the next track; the raucous El Moustachito, is all neck-veins-a-poppin’. This slick, muscle-car strut of Fu Manchu stoner pump is screeching tyres on tarmac, belching exhaust fumes and dripping in dirty and scuzz-filled southern-rock twang. It’s so posturing, arrogant and full of itself, you can’t help but grin and air-drum along. Check out the absolutely ripping Ghost City Session of El Moustachito for the full effect. Glorious work in savage, crunching instrumental dance-party shenanigans.

As if final track Délicieux was going to let itself be upstaged. The high noon-esque opening bars will make you reach for the brim of your hat as you adjust it, ready for the big showdown. Again, it’s teasing; the crisp, Queens of the Stone Age-aping guitars draw you in with their sultry almost surf-tones before erupting in that chaotic ramshackle delight. It’s utter math-rock mayhem, as drums collide with the guitar, rolling over the screeching, chopped up riffs that hammer away with hissing snake-like speed. It has an almost Zeppelin quality to it as the track muscles and pushes its way forward; brimming with that confident gusto and macho bravado, Closet Disco Queen know how to write an epic jam, one that gets your fist pumping.

Damn, this is good shit. It oozes meaty riff after meaty riff and Closet Disco Queen know exactly how long to stay their welcome and just how much to tease the listener before plunging them headfirst into their decadent and frenzied world. You can stream Délicieux below from their bandcamp or pre-order the vinyl. Treat yourself; these guys are an absolute storm of stoner-kraut deviance.