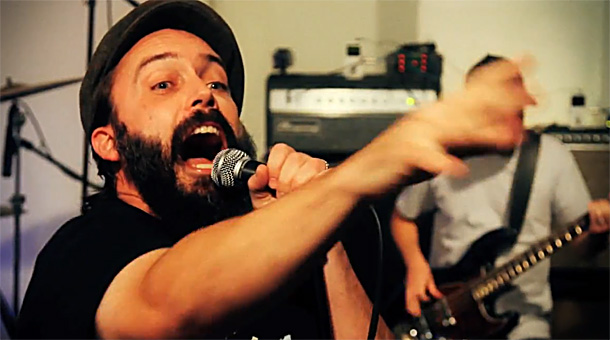 “Uncounted jazz masters erupting from the bottom of the seaâ€¦”

Earth Rocker is a rich enveloping record of fist-pumping, rocket-fuelled, burning-beard of raging adrenalin. The title is suitably apt â€“ you will struggle to find another record this year that will make the ground shake, rattle and roll as ferociously as this. It barely lets up for all 11 tracks and 44 minutes of its duration â€“ even Gone Cold the slowest track on offer, has a menacing, ravaged edge to it (think William Elliott Whitmore at his darkest) and the shifting passages that make up final track The Wolfman Kindly Requestsâ€¦ which throw blues, punk, dance rock and jam session flourishes far and wide. Credit to the production as well, which has a thick, rumbling feel, with Fallon’s mighty vocals at the forefront – his vibrant personality splattered over every single goddamn song.

The grooves ooze thickness and confidence, something which this Maryland mob have in Elephant-riding loads..

Opening track, Earth Rocker explodes with raw, untamed aggressive passion. Fallonâ€™s meaty cry of the tracks title and the line “EVERYBODY HEAR ME NOW?” is a bold, brash and commanding statement of zealous fervour. The crazy “bwahahahaha!” is the icing on a particularly tasty cake, of riff-soaked debauchery. Crucial Velocity is a follow-up gut punch of car-chase, film-noir rock ‘n roll chaos, with Jean-Paul Gaster’s superb drumming driving this track with righteous determination. Suffice to say, you’ll be shouting “MY ROCKET 88, FASTEST IN THE LAND!” next time you’re behind the wheel of a motor â€“ I know I will. If Christine existed in the present day, this is the track she’d be playing as she mowed downÂ LettermanÂ jacket wearing meatheads. Hey, she’d probably have a 10 disc changer with Clutch’s back catalogue on permanent rotation.

The dance-groove on Mr. Freedom struts with swashbuckling confidence and showcases Tim Suit’s exceptional guitar work, adding the blues-rock touch from previous releases such as From Beale Street To Oblivion. Fallon even manages some fourth-wall breaking, which is both hilarious and heart-warming. D.C. Sound Attack! is a full-on air-punch of ecstatic, alcohol-soaked southern rock ‘n roll â€“ harking back to Electric Worry in places (see the swaggering harmonica intro/outro) and just feels like a full-on overdose of cranked-up testosterone.

“One thousand Les Paul’s, burning in a fieldâ€¦what rabid religion poisons their minds?” chants Fallon, who’s clearly having the time of his life, hamming up the vocals so superbly on The Face, backed by the positive stomp of that trademark Clutch ardent rock fury. The grooves on this ooze thickness and confidence, something which this Maryland mob have in Elephant-riding loads. Book, Saddle and Go is yet another slam-dance anthem of fist-pumping, foot-stamping coolness and sounds like something a character played by Walton Goggins would listen to whilst being an uncompromising badass (seriously, it’s got hillbilly banjo-playing-asshole rock anthem written all over it).

The filthy bass groove of Cyborg Bette is hot contender for best track of 2013, thanks to its dirty stoner-punk drive. Never has a song about a callous, alcoholic fembot sounded so alluring and disturbing â€“ a guaranteed hip-thrusting menace of euphoric Turbonegro-style party rock.

“I will suffer, no evil, my guitar will guide me through…” chants Fallon on the title track. Take a note from Clutchâ€™s book, or rather record and let them guide you through the hard times, because Earth Rocker is the album you need to blast away the blues. Its the album that will crack a huge grin across your face and have you air-drumming/guitaring/bassing until your arms grow limp, tired and useless, while you bellow your lungs hoarse â€“ a glorious and exultant collection of songs, slick with cavalier rock n roll zeal and ecstasy.