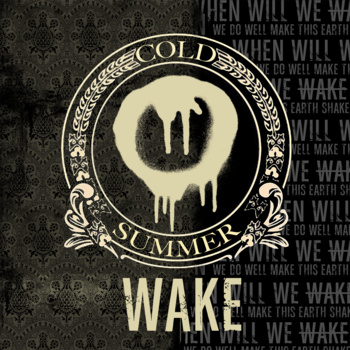 Thereâ€™s some fairly decent bands kicking around the post-hardcore scene at the moment and we can add Cold Summer to that ever-growing roster. The quartet hail from West Yorkshire and their off-kilter, barbed attack is something of a dangerous see-saw, but one that you want to test out again and again.

Opener â€˜Waitingâ€™ is chock full of strangled, broken shouts on the heavier, more denser moments, whilst the areas of build are more melodic, yet retain a dark, cutting edge. Similar to Break The Silence (anyone remember those guys?) the vocals switch between the Jeremy Bolm-style throaty rasps, to a cleaner and fragile sound at the drop of a hat. The guitar alternates from a clunking, battered scrawl, to a quite tappy, almost math-rock on the melodic interludes, bringing a nice if off-kilter balance between two conflicting styles.

Title track â€˜Wakeâ€™ is a stark and somewhat bleak 50 second stagger of La Dispute-inspired hurt and anguish, whilst â€˜A Is For Arsonâ€™ is somewhat more hopeful sounding. The opening salvo, is riff-heavy, distorted guitars, giving a stoner-rock groove and surprisingly clear vocals, backed by the barking scrape that was heard earlier. The last minute or so, is kind of a reprise to â€˜Wakeâ€™ as the overlapping harsh vocal chant of â€œWHEN WILL WE WAKE!â€ dominates the tense and taunt post-rock wash of sound that accompanies it.

Whilst â€˜Car Crash (In Progress)â€™ doesnâ€™t grab me immediately (although the slurred, harsh vocals reminiscent of the screechy one from Please Inform The Captain This Is A Hijack are superbly intoxicated) it builds with momentum on the melodic and painstakingly intricate chorus, not to mention the last 40 seconds, of guitar squealing noise and Thursday-aping screams. Whilst not revolutionary, it gives a shot in the arm to a genre that has been stretched so thin by bad imitators, yet Cold Summer have fallen on the right side if you will and know how to deliver the goods, in their own splattered and determined style.

â€˜Mistakesâ€™ is a stab at swapping the angular guitar noise for something that tugs at the old piano strings more. It’s a fragile and fairly nasal slow-burn of acoustic strumming and heaps of melancholy. It doesn’t quite have the gut punch of the previous 4 tracks, but it’s still brutally honest and raw-sounding in that respect.

It’s rare that these kind of token ‘quiet’ songs have the same effect or feel as strong. I can only think of a handful of bands that manage it – Touche Amore are one; if you’ve ever heard ‘Condolences‘, that same few repeated notes on a piano and Bolm screaming his head-off like he’s been incarcerated inside a well of fire. The Blood Brothers also managed it with ‘American Vultures‘ – I mean, what the fuck was that about?

â€˜Wakeâ€™ is a strong and promising start from Cold Summer and itâ€™s free to download from their bandcamp, so if youâ€™ve craving something that sounds similar to Thursday and Thrice then youâ€™re in for a treat.