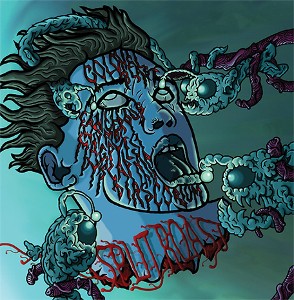 Christ, could you imagine it â€“ youâ€™re talking to an elderly member of your family, perhaps one who you havenâ€™t seen in a while and has just got over some operation and they ask:

Ok, this was released back in May but Iâ€™ve only just got round to looking at it. I feel duty bound to perhaps scrawl some words of insanity though, as I took the time and bandwidth to download the thing. 20 tracks over 60 minutes? Oh god. Well, as an introduction to the underground UK metal scene, yeah itâ€™s a good start really, so hats off to small independent labels like Condate records for doing it.

Northern Black Metal â€“ so itâ€™s going to be some dudes shouting about breaking my legs if I donâ€™t buy them some cigarettes over a lot of guitar jerking? Colonel Blast sound tinny; the drums are a clattering machine gun fire of someone trashing a bunch of huge dustbins, whilst the guitars grind through some pretty tight speed metal. The slower bits are mind-numbingly shit though and plod like a three legged elephant â€“ lumpy and off-kilter. â€˜The Crime Is Passionâ€™ finds its feet in actually being fairly taunt and menacing. There are some nice time changes, furious stop-start patterns and itâ€™s really great for the most part, some nice brutal beatdowns and a real sense of â€œI think someone is trying to kill meâ€¦â€ vibe. They then ruin it with a fucking fade out â€“ what the hell? Learn to finish a song, donâ€™t start turning the volume down you pussies. Minus a billion points.

Yeah, either thatâ€™s the drum machine from hell, or about 6 drummers or something not of this earth. Love the description on their facebook page: â€œintense eardrum pummeling northern grind! So fast you’ll shit!!â€

Some reasons why Magpyes are the best band on this release:

1.Â Â  Â Most of their songs are around 50 seconds long and even the longest one (at 3:42) doesnâ€™t sound like a complete fucking chore
2.Â Â  Â They obviously have a sense of humour.
3.Â Â  Â Some of the best drumming Iâ€™ve heard this year â€“ blisters? Iâ€™m surprised his kit isnâ€™t stained red after every show.
4.Â Â  Â Itâ€™s straight up, no messing around grindcore, with some wicked sludge-metal moments, aka similar to Weekend Nachos.
5.Â Â  Â Theyâ€™re from Leeds, so they probably all have Xboxes and have shot me in the face numerous times on Halo.
6.Â Â  Â The vocals actually sound like a load of magpies being fed through a mincer.
7.Â Â  Â They have a song called â€˜Wolf Bukkakeâ€™ and another song â€˜Sir You Forget Yourselfâ€™, which seems to exist as a wall of pure ear-pummeling chaos, with no tune, chorus, mid-section or style, yet still absolutely kills it.

Yet again, we have a drummer who seems intent on exploding like the dude out of Scanners all over his kit â€“ absolutely bludgeoning playing ability on â€˜Impious Conflagrationâ€™ â€“ hey, isnâ€™t that a Warhammer magic spell? Causes 2D6, strength 4 hits, no armour save, right? From Manchester, Dyscaphia are tech-death metal that ticks all the boxes in some insane asylum where death metal bingo is played. I actually donâ€™t know what the screams were at the end of the Warhammer song and I think itâ€™s best it was left that way quite frankly. Dyscaphia know how to make someone feel like their about to be left a gibbering, bleeding wreck. Donâ€™t really like the vocals; they sound like some fat accountant belching out passages from Lord of the Rings, rather than some bat-shit insane black-metal druid barking commands to the dark overlord.

Also from Leeds, Diascorium are a different breed; more all over the place than anyone else on this split â€“ they seem to be content to pick from a massive, overbearing metal tree loaded down with styles. Rather than selecting a few and honing their skills on them, they seem to have cut down the thing and dragged it back to their pit and brutally torn it to shreds, sucking every last bit of taste they can out of it. A mess is what it is. There are some weird moments of jazz, thrown in with detuned guitar squeals, vocals that range from a vomiting burp to a gnashing roar of damnation and then back to some fairly impressive tech-metal posturing that gives it that well needed brick-to-the-face of furious disrespect.