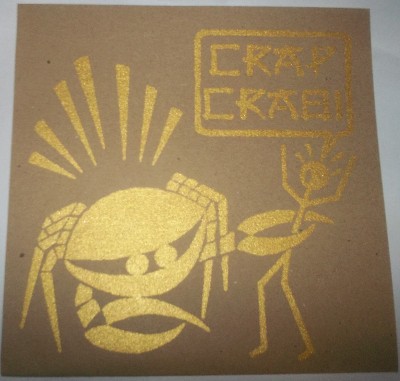 I picked up this EP after seeing Crap Crab and the pelvis-shattering hip-shakers that are Sons of Guns last weekend at a local Philipâ€™s Uncleâ€™s Boat (PUB). Having seen them before and being suitably impressed, their awkward, jagged instrumental dance rock was every bit as spectacular, due perhaps to me being so close I could have ruffled the bassistâ€™s hair.

Like all DIY record labels, Wild Animals seem to push the boat out with their releases, pouring time, energy and detail into their packages. For instance, this EP features not only a 7â€, but a CD, containing 3 tracks, a download code to get said tracks on your EM PEE THREE player, plus live versions as well â€“ fancy. Also, thereâ€™s some nice screen print artwork (mineâ€™s gold) and a funky picture of the band who seem to have dressed like a camp version of The Locust. Its heart and passion like this that makes the local scene so vibrant and important and one that deserves support as much as possible.

Their is a robot-rock tone to Crap Crabâ€™s tuneful madness â€“ think Queens of the Stone Ageâ€™s â€˜Regular Johnâ€™ and some parts of â€˜Crab Riffâ€™ would meld seamlessly into it. The fuzzy, guttural and persistent tone is an infectious ear-worm of sinister riffage. Itâ€™s slightly trippy as well; playing on almost psychedelic kaleidoscope of sounds, using the warm, grinding bass, with tappy guitar elements punching through one side and a spiralling high-pitched shred in the other.

Fans of Baltimoreâ€™s OXES will fall in love with â€˜Crap Crabensteinâ€™s Monsterâ€™ â€“ a track littered with stuttering, stop-start passages, that repeat and overlap, growing progressively more complex and irregular. The stabbing, spasmodic chords in the songs final minute are a true delight of tasty, math-rock styles, especially when it builds to the sudden and sharp conclusion.

â€˜Fat Crabâ€™ continues along this pathway; mixing more Big Scary Monsters-style, tappy-emo elements through a bouncing, energetic chorus, complete with handclaps and a party-atmosphere, much like â€˜Lifeproofâ€™ from And So I Watch You From Afarâ€™s â€˜Gangsâ€™. The coda is a meandering bend of drum rolls, muddy-bass rumblings and that stammering, spasmodic gait that Crap Crab have down to a fine art.

If Adebisi Shank and OXES tick the boxes as bands you canâ€™t function without, then Crap Crab could well be your new favourite group of dudes who make bonkers, yet awesome sounds. Get the EP package here.