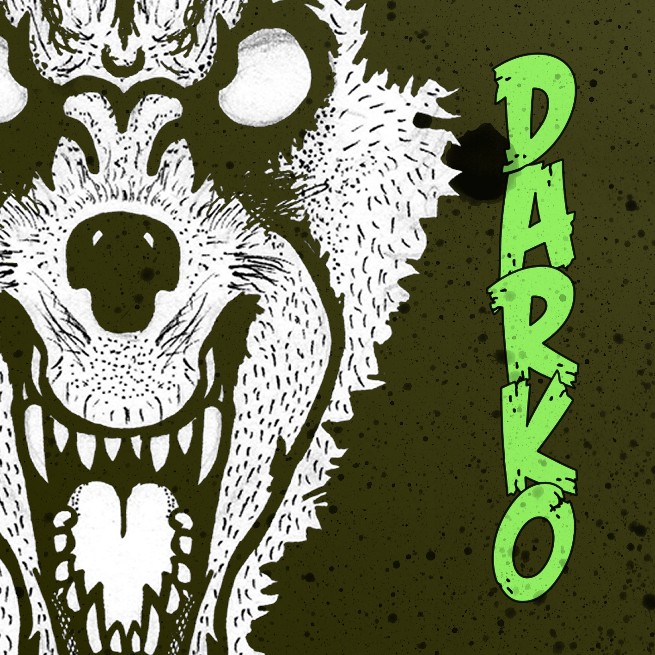 Itâ€™s nice to hear something that is so indiscriminately scrappy. Darkoâ€™s sound is akin to that of a mauled carcass. Whilst some parts gleam white, at least half of it is still caked in festering, raw meat, just waiting to be stripped clean. But does it really need to be? Part of the refreshing charm of this self-titled EP is the disjointed gruff nature that holds it together.

Predictably titled opener â€˜We Are Hereâ€™ is the sweating, rabbit-in-the-headlights kid, thrust out on stage in front of the entire school, expecting to perform a skit without having to suffer the torrent of boos and verbal abuse. Luckily, this first track is akin to said headlights kid performing a dance to a Jamiroquai song, stunning the assembled masses. â€˜We Are Hereâ€™ kind of falls over itself in the sudden rush spit itself out. The drums clatter and fumble with a delightful ramshackle torrent of noise, whilst the guitar see-saws with an unpredictable uncertainly in the opening 3 seconds, before finding its feet and rushing headlong into a boisterous blast of speed punk. Much like Set Your Goals, Darko channel melodic hardcore with pop punk with gritty determination and rowdy arrogance. The vocals are gravely as expected, similar to that of Small Arms Dealer, with a gruff sarcastic sounding sneer at the end of each word. The backing vocals are spot on, patching the melodic â€œwoaaaahhhoooohhsâ€ with the headstrong, crotchety lead wail.

â€˜Knivesâ€™ has a trashy, pop-punk backbone to support the frantic hardcore leanings provided by metallic guitar attack. Thereâ€™s also a touch of Jawbreaker in this, and early 90s emotional hardcore channelled within the clattering drum patterns and choppy guitars. Itâ€™s refreshing to hear something thatâ€™s harking back to a time when music still had bucketloads of passion and vibrant energy â€“ something which Darko have captured with their vibrant gusto. â€˜Yet We Breathâ€™ has a rough street-punk stomp, similar to that of Da Skywalkers, with the huge bonding backing vocal roar forcing through that family spirit of fevered unity. â€˜Delgaldoâ€™ takes the melodic punk rock bounce of Four Year Strong, swapping keyboard chimes for strangled riffs and tight breakdowns. â€˜Blinkâ€™ taps into that part of the brain leaving a definite earworm in the form of the words â€œwatch the world go by, take my hand, donâ€™t shut your eyesâ€ backed by uplifting, snappy punk rock. The final track is 30 seconds of splattered speed punk in the form of â€˜Paper Mirrorsâ€™ a track that tangles itself in knots as it rushes to finish in a blistering decrepit blast of choppy guitars and raw abruptness.

Thereâ€™s something so fresh about this â€“ sure the production is incredibly raw and the vocals waver occasionally, but this adds to the irrepressible charm and the gutsy determination Darko have. In many cases, these supposed niggles are positives â€“ this is how itâ€™s SUPPOSED to sound. This is music, in its fresh, untainted state and an exciting, refreshing debut, tinged with that early 90s punk snarl and the melodic attitude of the present day.