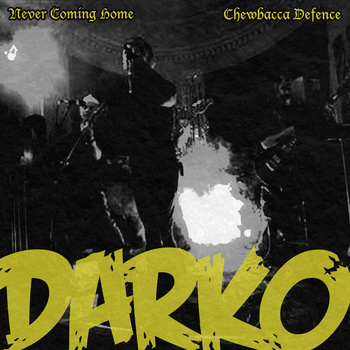 I think Darko have cleaned up their act a bit from their self-titled EP. This two-tracker retains that fresh-faced earnest nature of their debut, yet the tweaks and tinkering that the band perhaps needed have been implemented in making it an altogether tighter and more direct affair.

Iâ€™m quite surprised that Darko remain unsigned â€“ theyâ€™re exactly the sort of young, upcoming band that Epitaph would have snapped up faster than you can say â€˜Brett Gurewitz.â€™ Oh wait, Iâ€™ve realised why â€“ Darko are from Guildford; a place that I doubt Mr Brett knows the existence of; ah well. But it does beg the question why any of the underground punk rock labels havenâ€™t latched on to this yet â€“ About 7 years ago, Household Name Records would be falling over themselves to sign this lot.

â€˜Never Coming Homeâ€™ is the kind of track that swings, plucking you from your surroundings like some massive runaway crane, tossing you high into the air. Suffice to say, itâ€™s a bloody big hook of a song. Iâ€™ve got to admire the determination this has; UK melodic punk rock has been pretty barren of late, but Darko seem keen to raise it from the dead, something which I applaud them for. The fact they manage to match the raw splutter of a Hot Water Music track with a distinct poppy bounce and the odd technical flourish adds depth to their sound. Credit also to their vocalist; whoâ€™s voice shifts from a throaty Chuck Ragan growl, to a clean and clear pitch at the drop of a hat.

The second track, â€˜Chewbacca Defenceâ€™ showcases the metallic flourish more so, particularly on the lead guitar; which wails and shreds with furious speed, giving a nod towards the hardcore-pop-metal mash up that is A Day To Remember. The faster of the two tracks, its catchiness, is equal, if not more so than â€˜Never Coming Homeâ€™; mainly due to the vocalistâ€™s punctuated stabs of â€œWE ARE BROKEN!â€ on the chorus; which is obviously a track that was wrote with air-punching in mind. Props to Darko; theyâ€™ve nailed how to write something that has that anthemic quality to rouse a rabble â€“ itâ€™s the kind of track made to be played fucking loud at basement shows, just to see how much mayhem, destruction, nudity and chaos it can cause. To date and to these ears, easily the best track the band has recorded. Itâ€™s vital, never-ending sense of joyous bounce and grinning, sweaty fury is delightfully infectious.

I cannot recommend this enough; gutsy and determined; with a sharper edge all round Darko have managed to create their strongest and most impressive work through these two tracks; listen and give them the attention they thoroughly deserve.

(Download from bandcamp for 1 whole pound and also receive a video for â€˜Never Coming Homeâ€™ as well as a bonus acoustic version.)