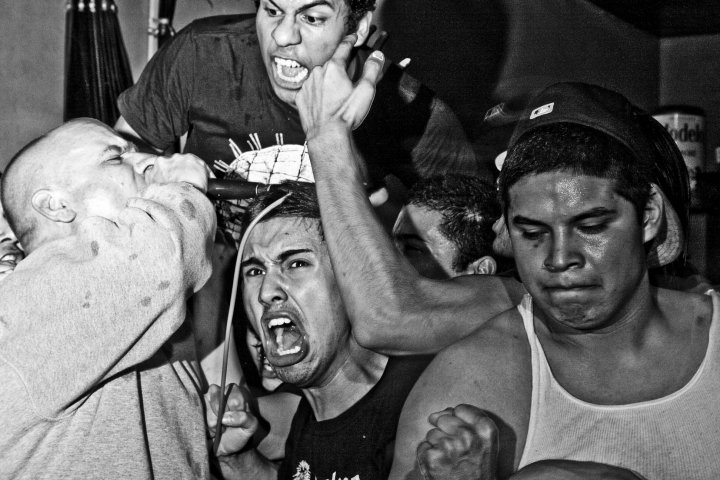 I’m going to invent a time machine, seriously. Right….he’s some bit of text about some bands I’ve seen/heard recently yeah.

Punk rock played with a disdainful sneer on the face of everyone involved â€“ Ministers Dead have a dense, taunt sound, similar to that of Hot Snakes, but are suitably erratic and scrappy when they hit their choruses. Some moments are reminiscent of garage-rockers, The New Bomb Turks, in their no-bullshit, trashy attitude. Live, theyâ€™re quite an intimidating prospect; vocalist Matt is a jittering ramshackle of a man; his voice falling somewhere between Jack Grisham of TSOL and the singer from Osker, albeit less slurred. They also do a decent cover of â€˜Police Truckâ€™; well worth checking out if you like the sound of early 90s, Nitro-Records punk rock scorn. Plus, singer Matt used to be in The Kramers, who were a great rock band, so you should listen to them as well.

Self-titled EP out at the moment, Â£2 at shows.
New EP ‘Made In China‘ is available through Diablo Records now.

Bedfordâ€™s answer to The Bronx fighting Winnebago Deal in a tar pit, albeitÂ  thrashier and more beer-stained. The Smoking Hearts are going from strength to strength; with new singer (the mighty Ben Mills) fronting them, a truckload of new songs and a strong work ethic (read as: â€œletâ€™s tear *insert name of town* a new one tonight lads!â€) Things are looking pretty damn ace all round. Their live set last weekend was chaotic as expected; with the whole band channeling a well-rounded mix of anger, aggression, intensity and more importantly, fun into their live shows, with the new material sounding heavier, meatier an even more deranged than the last time I witnessed their live onslaught. I heard from someone (and Iâ€™m paraphrasing here) that The Smoking Hearts wanted to be like â€œa faster a version of Panteraâ€- on the strength of this recent performance and the sneak previews of their new material, things are looking very much like cowboys from hell. Thrashtastic rock â€˜n roll destruction.

‘Pride Of Nowhere’ , the debut album from The Smoking Hearts is out now; the band is currently recording new material for their second. I discovered Despise You thanks to a link from my editor from another website that I frequently contribute to â€“ and was stunned that Iâ€™d never heard of them before now. As you can guess, theyâ€™re about a subtle as a block of concrete thrown at your back. Punk as fuck from Inglewood, California; Despise You is a complete speeding-freight train of destructive rock and or roll hardcore threshing machine. Songs like â€˜Roll Callâ€™ involves that kind of Black Flag, jaunt of crusty-hardcore punk, with the enraged vocalist simply roaring â€œFUCK YOU!â€ at everything, but with the kind of malevolence thatâ€™s actually fairly disturbing. Musically, Despise You channel chorus-free blasts of terrorizing noise that will make you grin like some deranged bastard. Only â€˜Fearâ€™s Songâ€™ from their split with Agoraphobic Nosebleed holds some kind of repeat pattern and shares a lot in common with 80â€™s hardcore.

‘And On And On…‘ a split with drum machine grindcore enthusiastsÂ Agoraphobic NosebleedÂ comes out near the end of April.

So yeah, listen/check out/buy stuff from all these bands, because they’re seriously worth your time.