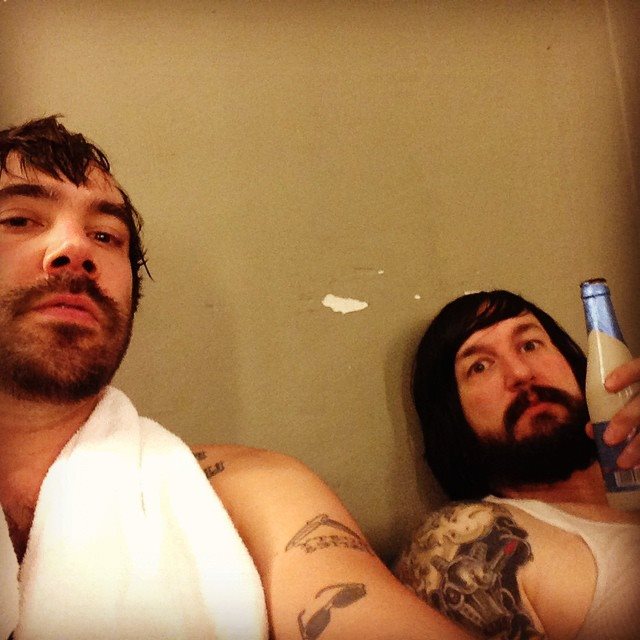 Bet you never thought you’d hear the words “Death From Above 1979 are recording a new album!”  Ten years. Ten years since Death From Above 1979 released any new material and now The Physical World is…well, a physical entity. The elephant-trunked duo of bassist/keyboardist Jesse F. Keeler and drummer/vocalist Sebastien Grainger have returned with the follow up to their furious 2004 debut, You’re A Woman, I’m A Machine (incidentally one of my favourite albums of all time) and it’s fantastic that they’ve patched up their differences and more importantly, back to making a pachyderm-sized racket. The big question is – what’s changed? Quite a bit. Fans of the Battlestar Gallatica referencing first album will notice some subtle nods to material of old, alongside the many surprises the Canadian duo have thrown in along the way, notably Grainger’s solo-work seems to have woven its way onto several tracks on The Physical World, whilst the dance-rock element of Keeler’s MSTRKRFT work bleeds through every now and then.

A lot of people are going to fall in love with the opening riff on Cheap Talk. As first tracks go, it digs in deep – full of sickeningly infectious groove and a sultry, teasing edge. Keeler’s pulsating bass pound, coupled with the squealing electronic glitches and the militant dance-punk cowbell taps from Grainger create one hell of a fabulous groove. It sounds like it’s fallen off the YAWIAM sessions – strutting about the place, full of bravado and crunching fuzz-rock. They don’t let up on the rollicking Right On, Frankenstein! – a dense, garage-punk splatter telling the tale of horror-tinged skulduggery and bringing the reformed dead back to life. Grainger’s distorted lead vocals punch through Keeler’s tight, chewy-bass chords, melding nicely into one of the most melodic choruses this duo have written.

For topless air-drumming, you cannot go wrong with the powerful percussion and cocksure strut of Virgins; Grainger’s bass-drum stamping demands attention and his love-sick croon of “There’s nothin’ sacred to me, I lost it in the backseat” let’s us know that he’s far from pure. At the two minute mark, the tone shifts from the stomping stoner-rock vibe (think a minimalist Red Fang) to an almost hip-hop style beat pattern, before lurching back into that desert-punishing gait and a scything riff that you’ll be humming for months.

A lot of people are going to fall in love with the opening riff on Cheap Talk. As first tracks go, it digs in deep – full of sickeningly infectious groove and a sultry, teasing edge..

The perils of being constantly contactable and the suffocating folds of social media are berated on the savage Always On – “if we brought Kurt back to life, there’s no way he would survive…” shouts Grainger, his sleepless ranting making it clear just how much Mr Cobain would fucking hate the world of now and how utterly screwed we are. There’s a touch of melancholy on the retro-synth-drenched wail of Crystal Ball – bruised hearts, no happy endings and disbelief are pulled apart and hung on display; powered through by Keeler’s infectious bass guitar.

Lead single Trainwreck 1979 is an absolute beast – whilst not as face-shredding and brusque as the preceding opening salvo, it’s a tuneful and infectious slab of dark, hip-shaking rock; showcasing Grainger’s superb set of pipes and backed by Keeler’s moody, shifting bass tones. From the opening bass-shriek, to the shield-smashing drum beats they’ve got this one nailed – it’s got ‘HIT’ painted all over it. The piano-drenched chorus, backing cooing and cries of “cos I want it all, can’t get enough…” will earworm their way into your brain and quite happily set up shop for the rest of time. Easily one of the best songs from their somewhat modest, but no less impressive catalogue.

The surly, jerk-punk rock of Government Trash is a howling mad, three minute stampede of spitting disgust. Keeler’s playing is gnarled and warped through a guttural trail of sludge and poison, whilst still retaining this dance-punk element to Grainger’s spirited and ever-changing drum patterns. Unsure if the scrawling guitar squeals on the uncomfortable pop-rock stomp of Gemini are a homage to Turn It Out but as a nod back to their previous material, it’s a nice touch. Closing track, The Physical World, begins with a sequence of off-kilter electronic roars and rampant sequencer bleeps, sounding like a Commodore 64 booting up in a vortex. They’ve saved their darkest work for last – the title track is unashamedly awesome, frightening and caustic. Grainger’s vocals soon become a static-filled garbled cry of electronic crackling – its as if he’s been making out with a robot. That riff at the 3:05 mark from Keeler soars with universe-crushing determination – but as the drums hit home, darkness descends and the duo slip into the realms of not-quite-doom, but it skirts the edge, fading out to a crackling wheeze of distorted keyboards and fractured, record-skipping noise.

Whilst some might miss the days of the ear-bleeding shred of their Heads Up EP, The Physical World is Death From Above 1979 experimenting with their unique and unorthodox caterwaul – if future material sounds anything like the riffs on Virgins, Trainwreck 1979, Right On, Frankenstein, Government Trash and the superb title track, then count me in – play this loud or else.