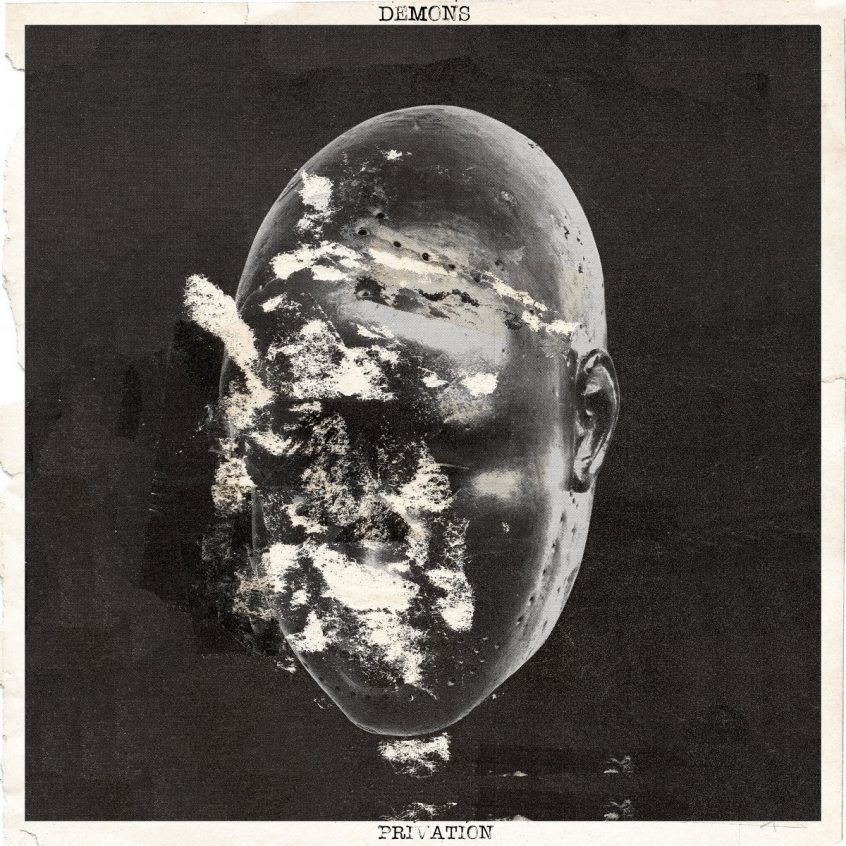 Chances are if you’re a fan of hardcore, Demons and their album, Privation, will be right up your street. Formed in Virginia, this four-piece have released a handful of singles and eps, as well as one full length (2017’s Embrace Wolf) and with Privation, they could be the sleeper hit of the year. With a name like Demons, you would expect this to be something that boils with anger, frustration and fury… I’m happy to say it ticks all these boxes and then some. Coming across as sounding like the bastard offspring of The Bronx and Whores, Demons play the kind of frantic, scrappy-sounding punk rock, backed with this sludgy, noise-rock tone of indignation. The first ‘proper’ song (after the 50-second intro 02.04) hits so hard the guitars can barely keep up – Ravage is a thrash-hardcore roar of defiance, that morphs into a gluttonous breakdown of juicy, crunching chords before abruptly stopping to make way for the dual-vocal attack of Play Acting Virtue, one of the many, many highlights on Privation. This song rips, it thunders, it makes a mockery of other songs in this very genre, switching from this slovenly grunge-pace, to rampaging punk rock at a flick of a switch, as vocalists Chris Matthews and Zach Gehring (of quieter types, Mae) trade vocal insults back and forth. Get in the circle pit for this one and pray to god.

Lever is the kind of low-end, neck-snapping head-bang attack you don’t expect. The bass on this thumps and pounds with ugly, torturous glee, whilst the guitars scythe and spit with a fuzzed-out, garage rock squeal. It’s grim, determined and bloody excellent to boot.

Those familiar with ex-Bad Guys noisemakers, Michael (the most annoying band to Google), will love the sound on Privation, it’s that rolling, bass-rumble of furious, off-kilter noisy punk rock that sounds dirty, crusted in grime with this aggressively engaging attitude that burrows its way into your skull. There are other moments that slam with the full force of a dirty, stoner-noise rock band in the form of the punishing Hosanna, which lurches and screams with teeth-gnashing rage and absolute fist-in-the-air anthemic power, very much like the purging roar of Josh Scogin’s The Chariot at their most manic and unhinged.

Slow Burn is anything but its namesake suggests, a rampaging 3 minute pummel of distortion-ravaged, guitar-hammering noise-punk, it splinters boundaries between early-METZ at their most scathing, cathartic and punishing, whilst taking elements of chaotic hardcore, especially in the no-bullshit vocal delivery, which is a guttural, relentless spill of anger and bruised memories. The blunt heaviness of Full Stop, along with Gehring’s rasping vocals has a slight Mastodon-twang, but with the speed of Red Fang, brilliantly straddling the line between post-punk and metal.

Privation gets in and out in around 33 minutes and doesn’t mess you around, it’s brutally fun, high-fives and stage-dives, bone-crunchingly good to absorb and experience and feels like a vital jolt in the arm to the punk rock scene. If you like Propagandhi, early Converge or Whores then Demons could well be your new favourite band. Outstanding work, addictive listening, an absolute barnstormer of a record.

Listen to Privation by Demons below, crack open the beers and have a bloody good time.