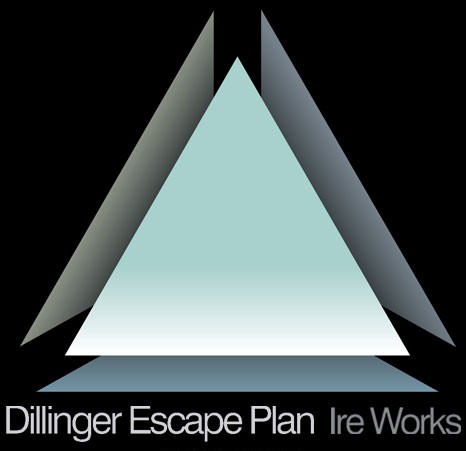 You have to admire Dillinger Escape Plan. Here is a band that has survived numerous line-up changes, a stint with Mike Patton, defecating on stage at the Carling Festival, feuds with Avenged Sevenfold and covering Justin Timberlake. Led by the formidable Greg Puciato, along with guitar-wizard Ben Weinman, bassist Liam Wilson and new drummer Gil Sharone; DEP are back with ‘Ire Works‘ the follow-up to their critically claimed, ‘Miss Machine.‘

I’ll throw my cards on the table right now and admit my Dillinger Escape Plan knowledge is somewhat limited. Here are the facts:

– I own the “Irony is a Dead Scene‘ Ep that they recorded with Mike Patton; it’s excellent.
– I have several songs from the “Miss Machine‘ album on my Itunes, they are all terrific.
– I have heard the Justin Timberlake cover. It is *ahem* interesting.
– I have seen the fire-breathing video/’43% Burnt‘ and that Virgin Megastores vid with the singer using the audience as stepping stones – yeah, that’s good shit.

My review therefore, will be purely based on what I hear on “Ire Works‘ and not a tired, dull witted comparison of how the band used to sound with different vocalists and their dice-roll decided time signatures. Got that? Good.

For an album that is aimed at the noise-rock/mathcore market, “Ire Works‘ pretty much has it covered and includes a few surprises along the way that will probably shock, amuse and disgust the listener in equal measure. It opens with the predictably noisy “Fix Your Face‘, which rushes from the depths like an oxygen deprived deep-sea diver, desperately trying to reach the surface. It’s an atrociously wicked beginning, that flows nicely into the mangled-spazz rock of “Lurch‘ that, like its title suggests, staggers, totters and throws itself around for about 2 minutes in a drunken haze of confusion and blaring pain.

This isn’t an attempt to be controversial, it’s genuine. In my opinion, “Black Bubblegum‘ is an excellent step towards something new and in some respects something old. Obviously, the stint with Mike Patton hasn’t done the band any harm, as this track sounds closer to Faith No More than anything else they have ever done. Puciato’s vocal range is a great example of how much his voice has developed as his opening salvo crosses boundaries between spoken-word and melodic harmony.

“Sick on Sunday‘ is the sound of 65daysofstatic jamming rather enthusiastically for about a minute, then deciding they need a vocalist to warp their sound, before cutting the track of abruptly. It’s a weird step, and the next few tracks are even stranger. The “scare‘ tactic DEP have optioned to use comes in the form of back-to-back tracks “When Acting As A Particle‘ (a trippy, Tubular Bells-inspired piece) and “Nong Eye Gong‘ (a minute long blast of ferocious punk rock that’s stamped down your gullet with such force, you’ll have trouble breathing for a while.) “When Acting As A Wave‘ is the musical brother of “…Particle‘ and instead of the Mike Oldfield tendencies, dominates a more instrumental rock basis, with a heavy use of distortion, electronics and briefly, elements of breakcore.

‘Milk Lizard‘ seems to have this creepy ‘film-noir’ vibe that I can’t seem to shake off thinking about whenever I hear the track, mainly due to the strange squealing, almost jazz-band effect that seems to sit in the background, just outside of the listener’s earshot; but it’s thereÃƒÂ¢Ã¢â€šÂ¬Ã‚Â¦.oh it’s there alright. Regardless of this, ‘Milk Lizard‘ is definite single material, should the band take down this path.

The decidedly creepy introduction of ‘Dead As History‘ (all glitch-filed programmed beats, tweaks and sinister keyboards) is taken apart as the other instruments decide to make their grand entrance blowing away the calm with the inevitable storm. It’s an erratic but deep statement about the band’s sound, emphasizing their experimentation and mellow space-rock tendencies. On the other hand, ‘Horse Hunter‘ incorporates several elements of unmanageable jazz guitar spliced with an unrelenting punk-meets-metal sound and is reminiscent of a monkey fucking around with the speeds in the mixing room, whilst Puciato screams blue murder at it from the sound booth.

The 7 minute closer ‘Mouth of Ghosts‘ is a somber-sounding, but gloriously moving and elegant piece of music that is unlike any other track on the album. At the 5 minute mark, DEP tip their sound over the edge, crashing in with the epic finale, closing what has been a startling musical odyssey and finishing with possibly one of the best tracks of their career to date.

I’m guessing that the band will probably be met with a lot of backlash with this album, (‘Black Bubblegum‘ in particular, which I think is the strongest track on ‘Ire Works‘, but hey what the fuck do I know, I just reviewed the thing) and I can bet they don’t give two shits that have been wiped on Greg Puciato’s shirt about what the fans think. This is an intense, intricate and fantastically challenging record that mixes elements of the complex math-punk sound with staccato electronics, fear-inducing vocals and stylish atmospherics. I realize that some may feel that throwing a load of samples and heaps of programming, mixed with more harmonious vocals doesn’t make something “amazingly revolutionary and totally awesome” (see Enter Shikari, *shudder*). I don’t think DEP are trying to do that and you shouldn’t either; accept it and stop bitching.