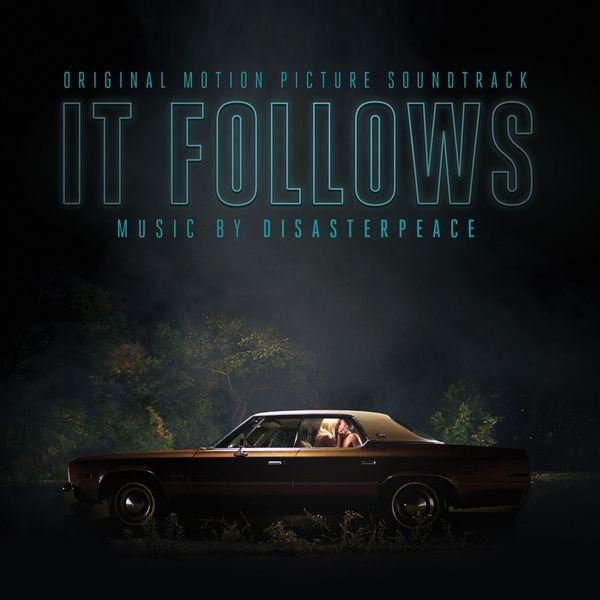 This album should come with a disclaimer. “Warning, do not, repeat, DO NOT listen to this if you are trying to drift off to sleep – may cause utter terror/crazy dreams.” Not that I’ve experienced such a thing, oh no. Well, maybe a bit. Disasterpeace (aka Rich Vreeland) is a musician, famous for the Fez soundtrack (an indie puzzle-platformer) and is partly responsible for making sure you find people walking towards you very slowly, the most scary thing in the world. I say partly. David Robert Mitchell, director and writer of the film, It Follows, can hold his hands up as well.

For those not in the know, It Follows is a minimalistic horror film, where adults are useless (re: you never see any) and anyone who has their end away is doomed. A girl, Jay, (played superbly by Maika Monroe) starts dating a guy named Hugh and after he freaks out in the cinema, they end up having sex in his car. He then drugs her, takes her to an abandoned car park and tells her she’s going to be ‘followed’ by a thing that can take any human form (a stranger, friend, family member) and if it catches her, it will kill her and then move on to him. The only way she can avoid it is to a) keep moving (‘It’ walks towards its victim very slowly) or b) have sex with someone else to pass on the curse (as it is). Got that? Good.

Whilst a lot of the tension in the film is built around the titular ‘It’ – I found myself drawn to the soundtrack (an homage to John Carpenter’s classic score from Halloween), which is the real star of the show and is utterly, utterly captivating, terrifying and nerve-shredding in every way. Even if you haven’t seen the film, trust me, listening to Disasterpeace’s work will make you feel like someone is just outside of your peripheral vision – watching, edging towards you, not stopping. Ever. It’s a difficult one to write about because really, it works best as one long continuous piece of unholy nightmarish horror. Opening track Heels, begins with a booming knocking sound as though the titular creature is requesting entrance. When the scratching, fuzzed-out electronic haze sets in, backed by a scuzzy, fervour of rising noise and the stabbing ‘Psycho-style’ chimes your heart will be racing and you’ll be furtively checking that no-one is standing behind your back. Title is a chilling icy, creep of rolling key-flourishes and some expansive synth waves that hold long, crushing notes of impending dread, whilst Jay might be the ‘nicest’ track, clocking in at only 88 seconds, it’s a blissful sea of shimmering calm and 80s retro-computer-game-title-screen joy.

Then it goes very, very dark.

Listening to Disasterpeace’s work will make you feel like someone is just outside of your peripheral vision – watching, edging towards you, not stopping. Ever..

The ever-rising, growing, encompassing power of Old Maid will make your toes curl – the bottle chimes that sound like they’re laughing at you are soon replaced by the pounding, relentless surge of stabbing (and boy, does it stab),of rapid key strokes, which are utterly frenzied. The huge, echoing knocks make an appearance again on Company – there’s violence here and when they suddenly stop only to be replaced with this in-human electronic shriek will your heart kick-start back into gear. The rising, key-changes are so shrill, discordant and disorientating, it feels like some kind of torture – abhorrent, yet fascinating, rooting you to the spot – leaving you unable to remove the headphones from your head as the wall of feedback drones on and on, well after the shrill shrieking has subsided. The last 10 seconds can well and truly fuck off though – I can’t even describe it so just listen to it and don’t die.

The subtle moody-synth of Detroit wouldn’t feel out of place on the Drive soundtrack and is only let-down by it’s short running time of only 80 seconds, yet it does the job, tailing off nicely into Detritus; a track that begins to break apart after a prolonged and eerie, droning hum. Playpen follows, via a-Goblin 70s style meander of spooky-sounding vintage organ. Like Detroit, Inquiry could have easily made itself at home on the Drive soundtrack, or even The Guest soundtrack; the racing, night-time synthesiser, coupled with the sudden downturn to a dour, melodic wave.

When Doppel hits home, it’s a mind-melt. It’s blue screen of death. It’s pure horror. Think hissing, barbaric noise-rock feedback, those ghostly chiming bottles, that shrieking howl a swirling vortex of hungry, screeching doom. There’s no light here – none at all; especially when the pounding drumbeats are spliced with those rattling, dripping bells and the sonar-like whine and the thumping beat of a heart – a raw, visceral soundscape. Father has a similar effect, clocking in at around 5 minutes as well, it’s like a savage remix of Doppel, melding and reshaping this already spreading noise into something that rises up on a tower of churning, bile and ugly mutilation.

It Follows deserves to have the recognition and the ever-lasting impact as Carpenter’s score from all those years ago. It has the feel, the sound and the intensity of something that will become iconic to horror. I just pray I never experience the truly disturbing terror it conjures from the depths of nightmares. Never listen to this on your own. Or at night. Spell-binding and petrifying.