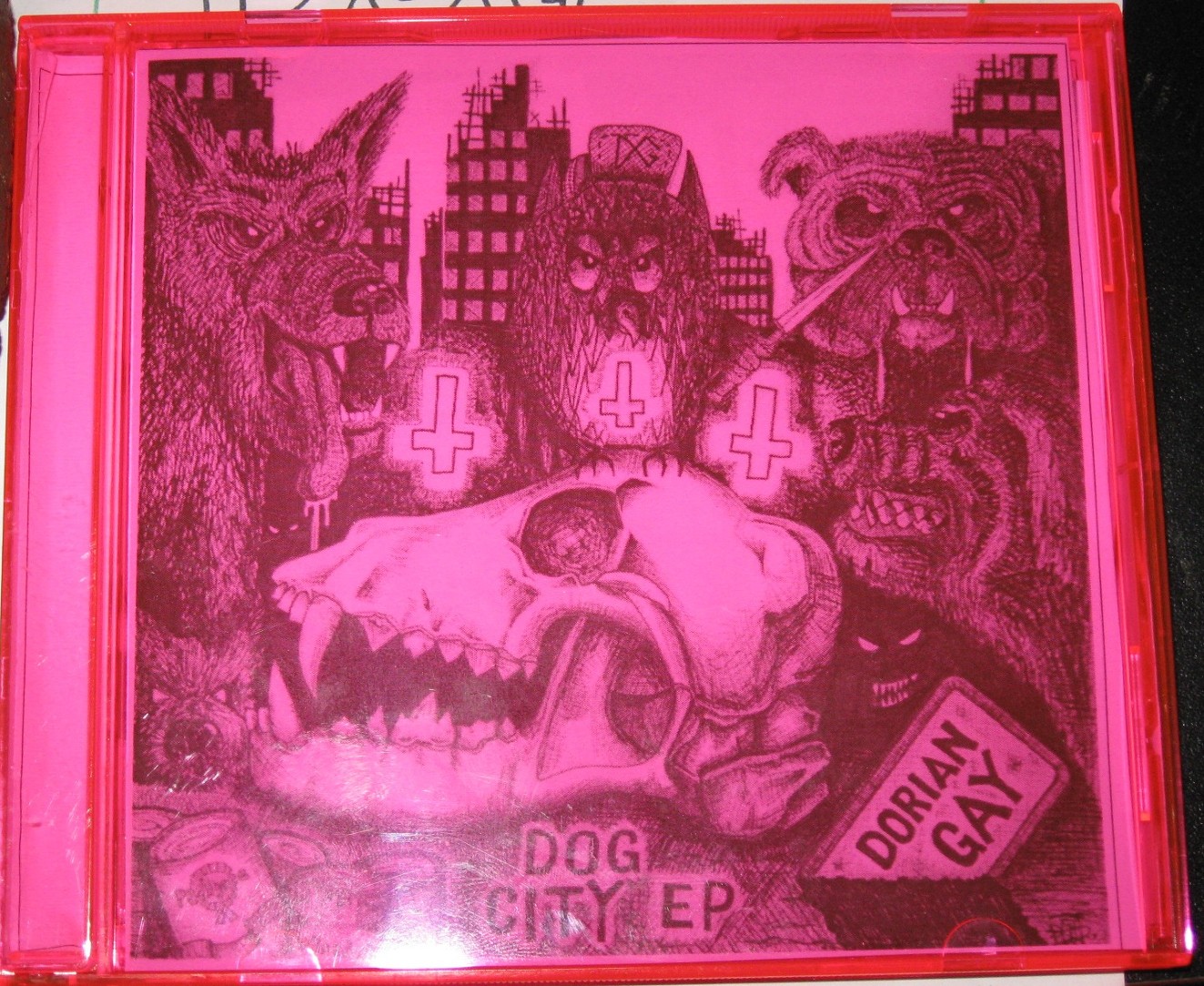 Band – Dorian Gay
EP – Dog City
Release date – now
Label – What Would Henry Rollins Do? Records (self released)
Sounds like – Scholastic Deth if they tuned their instruments and wrote about Nintendo, shit and dead cats.

First things first, the idea of living in a city run and full of dogs scares the shit out of me. I know people drone on about them being manâ€™s best friend; well not to this man theyâ€™re not. Secondly, the title ‘Dog Cityâ€™ is punk as fuck. It has that element of strays and wastrels, rotting down side alleys, dishevelled appearances and an attitude problem that ranges from psychotic to murderous. Thirdly, if there ever was a film made about a city where dogs become the supreme overlords, then these Norwich hardcore book-bashers would probably soundtrack it.

Dorian Gay are a hardcore band that have digested the pages of ‘Our Band Could Be Your Lifeâ€™ and shat out their own crude template of 80s raucous punk. Theyâ€™ve also injected the unsophisticated humour of Jimmy Pop in their track titles which rip off various works of popular fiction. Any band that can stoop to that level of rudimentary profanity in renaming Milan Kunderaâ€™s book as (yes, I looked it up and no, never read it) ‘The Unbearable Shiteness of Beingâ€™ deserve two thumbs up. Iâ€™m intrigued as to where theyâ€™ll go next on the follow up â€â€œ how about ‘A Pissage To Indiaâ€™? or ‘The Twatcher in the Ryeâ€™? Or my personal favourite ‘Lord of the Fucksâ€™.

Opening track ‘The Unbearable Shiteness of Beingâ€™ starts with some spliced together spoken word segments, reciting the bandâ€™s name over and over, much like in the style of Trail of Dead’s ‘Madonnaâ€™ album. This concludes with David Brent lamenting that â€œitâ€™s not gayâ€Â before launching into an actual song thatâ€™s reminiscent of choppy, Bad Religion-style punk rock and vocals that tread a thin line between the rasping shout of Rollins-era Black Flag, laced with a snotty, brattish slur of discontent.

Iâ€™m assuming itâ€™s an indirect tribute, but the barking samples on the track ‘Dog Cityâ€™ give a nod towards Pitbull-Grindcore enthusiasts, Caninus, whilst the tune chugs at a moderate, scuzzy pace, ticking all the right boxes â€â€œ gang vocals, hefty breakdowns and a thrash-end section thatâ€™s cut short far too soon. ‘Your Missing Cat Is Deadâ€™ makes up for this however; firing off breakneck fuzzed-out hardcore punk (that is reminiscent of early Dead Kennedys in places) with chaotic malice and a familiar crunching beatdown. Props for the casio-keyboard ending, which adds a touch of hilarity and off-beat campness to proceedings. The methodical plod of ‘Bowsers Castleâ€™ apes the giant, spiked backed lizard to a tea; staggering under a weight of its chugging, dogged determination. If the unexpected scream of â€œBOWSER YOU WAAAAAAAAAAAANKERâ€Â (which is something that many N64 players have shouted after being hit by the massive fuck on Mario Kart, just seconds from finishing first) doesnâ€™t bring a smile to your face, then the guitar-scrawling scrimmage of the last 20 seconds will have you chanting your detest for the Koopa King with raucous stupidity. Vocalist Jack takes a lethargic, ‘I-could-care-lessâ€™ approach to his singing, which is all slurred splutters of inebriation. However, at several points itâ€™s as though someone has picked him up on this and he begins to get progressively louder, angrier and clearer shouting his thoughts with all the gusto of a deranged religious street preacher.

â€™10 Steps To Middle Class Rebellionâ€™ seems to point an accusing (middle) finger at the notion of scenesters adapting to whatever new trend is currently sweeping the nation and presumably being ‘fake.â€™ The lyrics â€œfacial piercing and regrettable tattoos, both something unique to you/been done before, youâ€™re not the firstâ€Â¦middle class rebel, in 10 steps, do exactly what the song says.â€Â The DG notion is that perhaps hardcore punk has become so formulaic now; itâ€™s possible to create a step-by-step guide. One thing to note on this track; at the start, the vocals seem like theyâ€™re constantly playing catch-up and only tag in at the first chorus. Deliberate? Perhaps â€â€œ gives the song a breathless rush of snotty adrenalin.

Props to the distorted guitars on ‘The Great Shatsbyâ€™, which whine and pitch like theyâ€™re being played near a Theremin factory. From what I can make of the lyrics, it seems to be promoting the nature and positive factors of an apathetic existence and the disillusionment with the outside world and possibly channelling elements of Minor Threat.

Wes Eisoldsâ€™ now defunct Some Girls seem to have been of some influence here; the Intro to ‘One Came Over The Cuckoos Nestâ€™ shares many similarities to ‘Ex Nuns/Dead Dogsâ€™ â€â€œ the grinding, stuttering bass build is almost a direct copy, but manages to sound filthier and jarring. The gritty build up sees DG take a slower, more methodical approach, whilst the lyrics target what I can image is the club scene; painting the whole experience in a negative light with the words: â€œtoo many dickheads/music is shitâ€Â¦why did I fucking bother? Take me outside I wanna go home.â€Â

Nowadays, hardcore bands are 10 a penny; luckily for Dorian Gay, theyâ€™re a particularly shiny penny with the kind of songs that batter home their bookstore-core racket and could well save the scene from gradually becoming like their namesakes famous portrait.

(Below are my suggestions for new Dorian Gay song titles):

‘Dog City‘ can be bought here in the following totally radical formats of tape (yeah they still exist apparently) cd (soon to be phased out come 2011) and download.

Dorian Gayspace
Dorian Gay Site
What Would Henry Rollins Do?