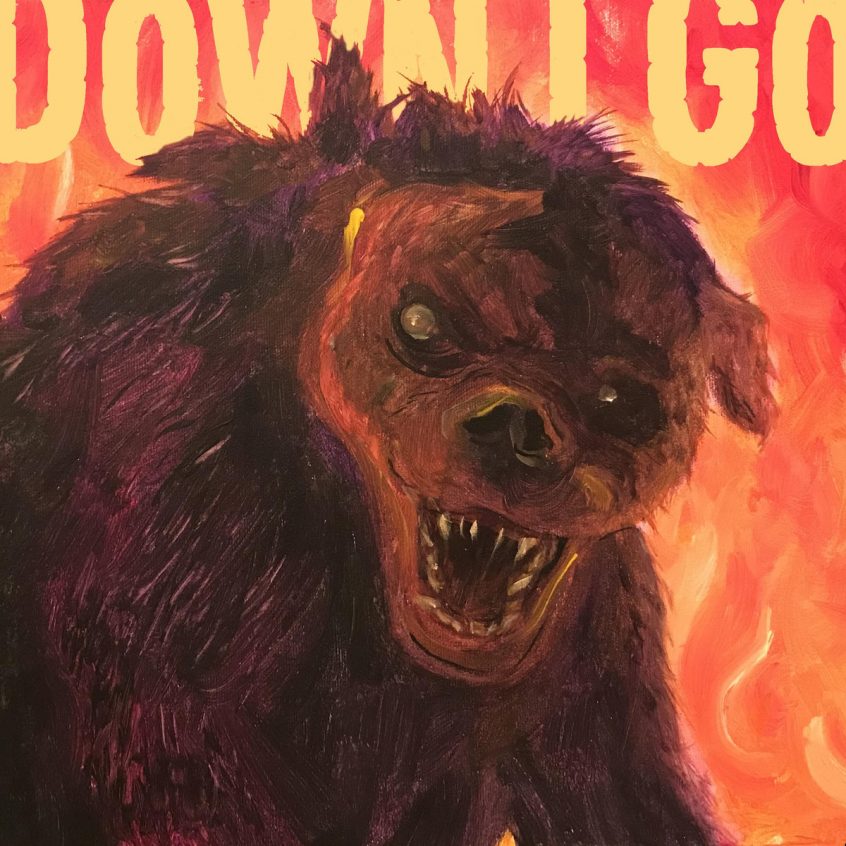 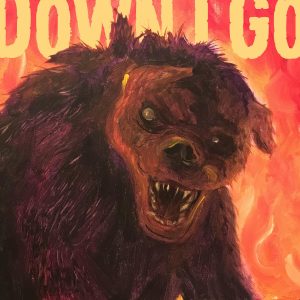 Down I Go
EP: All Down the Church in Midst of Fire the Hellish Monster Flew, and Passing Onward to the Quire, He Many People Slew
Label: Self-released
Release date: 8 July 2019
Sounds like: Being eaten by a giant skeleton. Escaping a hound. Knocking at your door. Your final resting place.

Down I Go (comprised of Pete Fraser, Alan Booth and Ben Standage) are like Schrödinger’s cat, both “not a band” but also still recording music. The location issues mean they will probably never tour again, but power of the Internet means that the band is technically still active and remains, unsinkable.

You know the story by now, having been covered numerous times on this website, all EPs and albums are concept albums – from celebrating Gods, to Mortals, sinister beasts and mythical harbingers of death are on the cards for this hefty and brilliantly titled mouthful of an EP, All Down the Church in Midst of Fire the Hellish Monster Flew, and Passing Onward to the Quire, He Many People Slew. This is basically the perfect subject matter for Down I Go – it’s intriguing, mystifying, deliciously oddball and sits within the right realm of tense, deranged anarchy as their musical output.

Kicking off All Down the Church….Gashadokuro (rattling skull) is the tale of skeletal giants that wander the countryside at night and creep up on unsuspecting victims and crush them in their mighty grip or simply bite off their head. The trademark Down I Go immediacy is there, the jazzy-Dillinger-esque guitar flourishes are swallowed and spat back out by the scrambled and frenzied vocals of Pete Fraser, who recounts tales of these horrific skeletons, blood rushing down in torrents and some rampant Mike Patton-esque squeals, barks and roars. It then morphs into this bending, nightmarish squeal of Cardiacs-style jazz-prog-noise in the form of a wailing, discordant saxophone alongside the sledgehammer percussion of Standage and the monstrously huge, scything riffs courtesy of Booth.

The eerie, almost robotic chant of “knocking at the door, knocking at the door, knocking at the door….” on the bone-chilling Kumakatok is the kind of huge vocal hook made for a live show, similar to their incendiary chant of “Turkmenbashi, father of the Turkmen!” from their Tyrant LP.  This track starts as what can only be described as both a warning and a threat, with the unreliable narrator becoming more prominent, (“NOWHERE TO RUN!“) as the track descends into these barbaric and dread-inducing screams of “OPEN THE DOOR! OPEN THE DOOR!” over the punching, doom-hardcore onslaught. Best not to listen to this at night, as if anyone does knock on your door, you’ll leap out of your skin, which is perhaps what Down I Go want.

The splattery punk-ish hardcore of Black Shuck (The Bungay Black Dog) is another stalker-like tale of being followed by a sinister grim apparition that takes the form of a hulking canine beast. Much of this EP plays on the notion of the fear of something terrible lurking in the shadows, much like Disasterpiece’s It Follows Soundtrack, but whereas Disasterpiece was the soft creep of nightmarish suspense, the likes of Black Shuck launches itself at your throat and tears it out in a bloodthirsty frenzy.

Santa Muerte (goddess of death) is perhaps one of the most interesting and diverse Down I Go tracks, strongly radiating Fucked Up soundscapes and song structure, ala Dose Your Dreams. The math-rock guitar shred courtesy of Booth, reminds you of their metallic roots, whilst Peter Fraser’s vocal range is exceptional, alternating from a soothing, almost falsetto tone, to his trademark Tyrannosaur-screech, with both overlapping each other wonderfully on the booming, sludgy, chorus. “Lead me to, a better place/somewhere I’ll be warm and safe” is an incredible line, with an irresistible vocal hook. The muted sounds of the brass in the background, keyboards and sprinkling of piano gives the track a beautiful and wondrous dynamic and has this bombastic, and anthemic chorus that kicks back in with this roaring and pleading flourish of “take me, take me, take me to the other side!”

The only disappointing thing about this is, not enough people are going to hear or experience it. Down I Go should be massive; their take on hardcore has evolved through their near 14 years as a band, developing from dinosaur noises to majestic prog-hardcore tales of Icelandic folkore to this passionate salvo of thundering noise about legendary creatures of death. Certainly, this is one of my highlights of 2019; anyone who is a fan of Dillinger, Fucked Up, Botch and Cows should get on the Down I Go train pronto.

Shout out to Mike Howland’s artwork depicting Black Shuck for the EP cover, an eerie and horrifying piece.

Consume via your ears the majestic blast of schizo-hardcore-tomfoolery of Down I Go‘s new EP below.