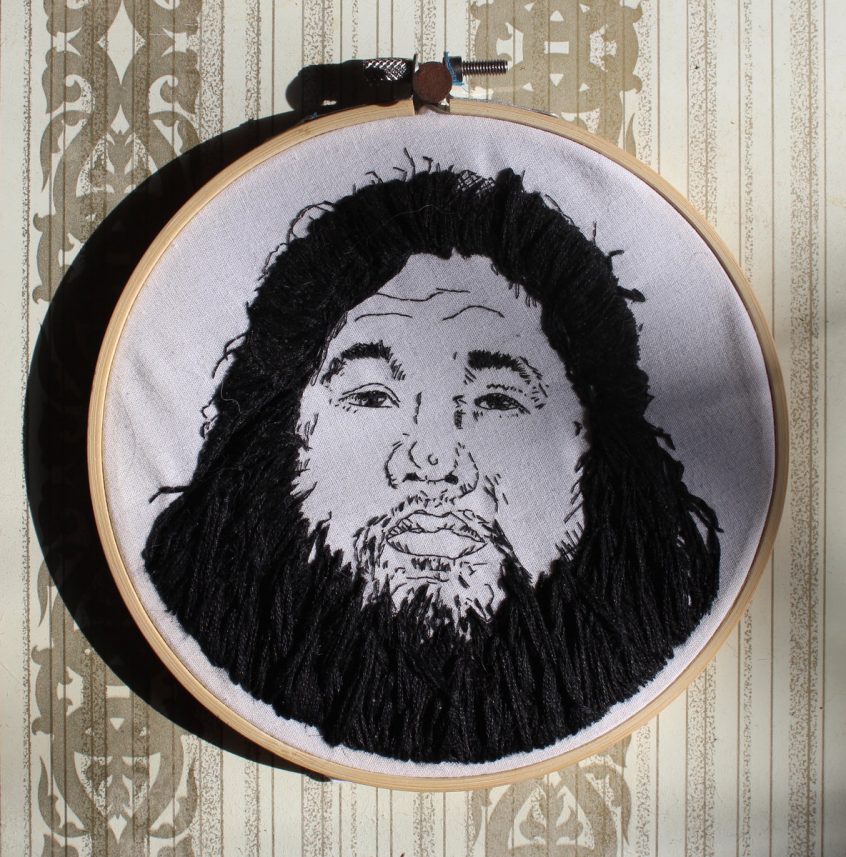 “You must never worship anyone but me, I will be the king of this castle I build.”

Do we really need to introduce Down I Go? They are the kings of concept-core. Nothing is safe from what they cover – dinosaurs, robots, tyrants, disasters, mortals, gods, mythological creatures, Icelandic folklore, and now, the Japanese Doomsday cult, Aum Shinrikyo (which is quite something). This album was supposed to come out on a label on a lovely slice of wax, but due to some nervousness around the title and the fact Aum Shinrikyo is an active cult still, the label decided to back out, meaning Down I Go decided to release this new slice of deranged brilliance digitally and label-less instead.

Like all their albums, there have been huge leaps in terms of their craft, and Aum Shinrikyo is probably their most consistent, chaotic, and progressive to date. One thing that is of note and was featured on 2015’s You’re Lucky God, That I Cannot Reach You is the heavy use of brass, creating this kind of Botch, using Rocket From The Crypt’s horn section (this is exciting, oh yes). Also, the subject matter is somewhat a lot darker, unsettling, and generally unpleasant, making these songs and Down I Go’s sound somewhat more caustic, relentless, and brimming with menace.

This doesn’t mean you won’t be shouting along to it all, oh good god no. After all, one of their most “anthemic” songs is about the mad Turkmenistan dictator who built an ice palace, banned beards, and renamed bread after his mum.

The opening track, Banjawarn Station (the place where Aum Shinrikyo tried to stockpile uranium in order to build a nuclear warhead – they failed) sets Down I Go’s stall out for what’s to come over these 12 tracks and 35 minutes – it’s raucous, oddly harmonious in places, with one of the best moments being the repeated screamed vocals of “MINE URANIUM! IN AUSTRALIA!” and roars of ruling the world, with the angry and angular brass punctuating through the heaviness with boisterous ferocity.

The jazz inflections on the guitars on Saviour For Sale feel like a trip down the rabbit hole, bending and spiraling out of control, coupled with the spiraling brass section and vocalist Pete Fraser at his most aggressive, barking, a spittle-fuelled tirade of noise, with the only intelligible lyric being (I think) “how does it taste? Is it salty?”

You Don’t Leave embraces the darkness of Aum Shinrikyo’s practices, telling the story of Kiyoshi Kariya, the brother of a defecting member of the cult who had escaped, and was subsequently kidnapped, drugged, died, and then had his body incinerated and his ashes scattered in a lake. The chorus of “Do what we say/obey all day/if you don’t stay in line/you will suffer” is sung in such a mock-gleeful way on one of the heaviest tracks on this album, which taps into elements of bludgeoning metalcore, scathing hardcore and the chant of “you don’t leave, you don’t leave, you don’t leave” is chilling and full of menace.

The Voice of God Part 1 and Part 2 sound like an evil version of a lost James Bond theme, heavily using the brass section to create this pompous, flamboyant slab of Meat-Loaf-esque power-metal noise that swells to bursting with the soaring, exaggerated vocals that chant “the voice of god” the wonderful horn flourishes and Ben Standage’s powerhouse drumming and I love, LOVE that they end it with Fraser screaming “DOWNIGO!” a homage to Billion Dollar Burning Coffin on This is Disastercore, surely?

The stabbing, lurching riffs on Follow No One Else, hark back to that classic Down I Go sound, a heavy, almost-sludgy elephant stampede of mangled noise rock, which is all about Shoko Asahara claiming to be this messiah, (Superhuman abilities!/Aum Shinrikyo/Worship me!/Follow me!/I am your saviour!) with vocalist Pete giving an incredible powerhouse performance, switching from this acidic bark, to a crooning zealot, back to this almost spoken-word tirade and this rasping, snapping rabid shriek of fanatical glee. Credit once again to the experimentation on this, especially the last 30 seconds which divulges into an instrumental coda of Japanese drumming, wildly off-kilter trumpets and sounds like a carnival band falling apart.

There’s a bit of a groove-metal vibe to the storming These 25 Wise Members, that dips into moments of frantic post-hardcore, ala The Blood Brothers (think overlapping vocal trade-offs that gnaw and gnash at each other) whilst the frenetic guitar work from Alan Booth, not to mention the vibrant blasts of pure ecstasy provided by the brass section and the bending, crushing, riffs in the last 30 seconds all create this chaotic aural swirl of deranged brilliance. Euphoria seems to be something that runs through this album, especially on the bouncing almost pop-metal A Busy Monday In The Springtime, which utilizes a huge sing-a-long chorus of “shut your eyes and do exactly what we practiced” and I can see this being one of those anthemic moments if the band were to ever tour and play this – mass audience participation.

The final track, Execution, has an almost battle-metal stomp to it, all galloping riffs and drumrolls, with these trade-off vocals between Fraser and guest-vocalist, Stuart Warwick, who eloquently poses the question “I didn’t follow you for violence/so just explain what lead us to…” while Fraser snaps back like a rabid dog, a tirade of supposed reasons, backed by this rolling burst of flailing hardcore. The last 40 seconds and I may be completely wrong on this, make me think of cult leader Shoko Asahara, in the executioner’s chair, berating all those around him as he’s finally put to death, his madness and devotion to the cause completely consuming him, whilst his rantings, expressed by both Fraser and possibly Warwick, sound as if they are attempting to tear each other apart as the song reaches it’s grim, breathless final-meltdown.

This is quite simply, fucking stunning from start to finish. I mean, I have no idea how this translates in a live environment (due to the logistics of the band living in different countries, this is sadly a challenging prospect but not one to rule out). The level of experimentation on this, the passion, the energy, the rawness the nerve as well to tackle a subject as controversial and create something that you can shout along to, bang your head, and have a bloody great time deserves commending. Easily one of the best, if not, THE BEST album I’ve heard this year, scratches that itch of abrasive, experimental hardcore, metallic noise, punk rock, jazz flourishes, and rock ‘n roll depravity. You’ve not heard anything quite like this, trust me.

Get your Japanese doomsday cult-core on and buy Aum Shinrikyo by Down I Go for Name Your Price. Yes, really, they’re giving this away. Get a t-shirt as well, featuring possibly some mangled dogs from The Thing or a lady pulling her hair, treat yourself.