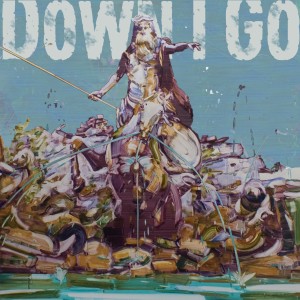 Band â€“ Down I Go
EP â€“ Gods
Label â€“ Shelsmusic
Release date â€“ 7 November
Sounds like â€“ flying too close to the sun, carrying the weight of the world, the kraken devouring a princess, transforming yourself into a horse.

â€œI will chase you through the sea forever and ever.â€

So the band known as Down I Go will soon be no more. What with various members emigrating to pastures new and shouting about wikipedia entries slowly getting a bit long in the tooth, theyâ€™ve decided to bow out gracefully. Or should that be â€˜bow out as a thrashing, malevolent roar of deity-destroying rage? â€˜Godsâ€™ is their last release, following on from previous conceptual outings dinosaurs, disasters, robots and tyrants.

Despite only being 4 tracks and 15 minutes long, there is a lot going on during â€˜Gods.â€™ Down I Go donâ€™t scrimp on the experimentation, nor do they on volume or indeed on the interminable mood-swings. The way certain moments sway from lurching, post-hardcore to absurd brass segments, not to mention the changes of tone that at times seem fairly sudden, but beneath it all, you can hear the subtle shifts slowing creeping in beneath the sound ofÂ  their metallic dissonance.

The first track on â€˜Godsâ€™ deals with the goddess of the harvest, sanctity of marriage, the scared law and life and death. â€˜Demeterâ€™, is a ruthless and quite a scathing opening track, structured somewhat around the myth surrounding her involvement with Poseidon and his pursuit of her. Thereâ€™s some lyrical trade-off between vocalist Pete and drummer Ben, with the former channelling an irrepressible tyranical bark, whilst the latter almost reaches a falsetto, with his ostentatious cry of â€œtransforming yourself into a horse wonâ€™t protect you from my lusty sword!â€ (easily one of the best lines Iâ€™ve heard this year). â€˜Demeterâ€™ is a fairly ungainly song â€“ it staggers and sways under this grungy, bass-driven scrape, complete with constantly squealing guitars. The rising wail around the minute and a half mark, morphs into yet more schizophrenic back-and-forth as well as the cry for the return of Demeterâ€™s daughter Persephone from the clutches of Hades. The tone again shifts at the 2:20 mark and stays consistently solemn until the tracks conclusion. Gone, is the rage, the snapping, the System Of A Down-style word play. Instead, a melancholy, desolate piano takes the lead, whilst the vocals mournfully recite the same 4 lines: â€œtrappedâ€¦living with Hades, stuckâ€¦in the underworld, curseâ€¦the pomegranate, itâ€™sâ€¦.winter forever.â€ For the somewhat tongue-in-cheek, hydra-head of music that is Down I Go, itâ€™s some of their most different and challenging work.

I fail to see how any of my words can do the next track â€˜Poseidonâ€™ any justice, because the video is so superbly bat-shit insane. From the disjointed opening riff, to the sea-shanty bounce of its coda, itâ€™s one of, if not the best thing theyâ€™ve committed to tape. The guitars sound completely filthy, with a proper de-tuned growl thatâ€™s been present in the Down I Go sound since they began. The screwed-up electronic crackles and yet more piano halfway through as the track plays the old â€˜quiet, quiet, quiet-LOUDâ€™ card perfectly. Shifting from the sorrowful wails of doomed sailors, it kicks back in with such tortured metallic fury and cackling destruction. There is also some wonderful gang-vocals near the end, coupled with blasts from a saxophone, that irrepressible metallic stomp and if the band ever decided to play live, a chant (â€œFREEZING! AND DROWNING! SPARE US, POSEIDON!â€) that would even rival Turkmenbashi.

After hearing â€˜King Herod the Greatâ€™ and â€˜Dionysusâ€™ both from Down I Goâ€™s â€˜Witness the Shitnessâ€™ b-sides EP, you can tell where some of the ideas for the more interesting vocals on â€˜Atlasâ€™ stemmed from. The hilariously barmy falsetto vocals give a slight â€˜Mike Patton on heliumâ€™ edge and embrace a sound last heard on Dillinger Escape Planâ€™s â€˜Irony is a Dead Sceneâ€™ EP. Credit to the poppy keyboard flourish around the 1.15 mark â€“ absolute genius â€“ never have keys and jagged hardcore sounded more in harmony. Whilst the song is about a struggle, namely Atlas carrying the weight of the world and â€˜dispersing the weight of the planetâ€™ there is also a lot of hope, that suddenly cuts out almost too soon on an elongated keyboard wail as if the world finally became too much of a burden for those shoulders.

Final track â€˜Icarusâ€™ relates the tale of the ill-fated engineer who flew too close to the sun (some say it was because he flew too close to the sea, soaking the wings resulting in his death) and fell to his death when the wax melted. Possibly the most acerbic track on â€˜Godsâ€™; â€˜Icarusâ€™ is nothing short of a snapping, snarling ball of disjointed bile and jittering unpleasantness. The second half of the track features the lines â€œWAX IS MELTING! FEATHING FALLING! DOWN YOU GO! DOWN YOU GO INTO THE SEA!â€ which is spat with such venom over some gnarly, sludge-metal that staggers and contorts like a wounded Minotaur before ending in a scrawling caterwaul of feedback and bizarre guitar squeals.

To conclude, â€˜Godsâ€™ is Down I Go going out on a high; their most accomplished work â€“ a deity toping blast of unique and twisted metallic noise. Simply: unsinkable.

If youâ€™re still not convinced that this is one of the most essential metal EPs this year, then head over to shelsmusic and order a copy right now. Alternatively, you can buy the download from shelsmusic bandcamp here.

Down I Go
Down I Facebook
Shelsmusic
Shels bandcamp