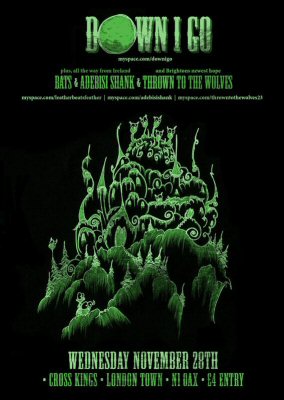 I actually couldn’t think of a good pun for the title, except for ‘Going Down in London‘ but I felt that was to risquÃƒÂ©. So you’ll have to stick with the long-winded one above, got that? Good. Let’s get down to business.

The Jester Bar in Cross Kings is tiny. It’s slightly smaller than the ground floor of my house, but much narrower and those suffering from claustrophobia shouldn’t stay down there for more than a minute. It’s small, cramped, dingy and akin to being trapped inside a very garishly painted coffin and it’s about 10 degrees to warm. Saying that, not only was it completely devoid of a stage (brings back memories of Hitchin’s Club 85) it was quite a quaint and cosy venue, even if it did resemble Homer Simpsons‘ basement.

First band, Thrown To The Wolves are an interesting prospect; featuring two vocalists, (one who sounded like an angry Andrea Zollo and the other screaming as though he’d consumed Dani Filth’s voice box) doom-laden riffs and a giant of a bass player, they ploughed through an impressive set of Baroness-esque heavy rock, coupled with jagged guitar noise and guttural roars. Terrifying and strangely warming at the same time; parts of their set were akin to having your head split open by a bass drum. The only disappointment was the lack of merchandise – note to Thrown To The Wolves; get in a recording studio and get these songs on tape; promising stuff.

This is a review of the set performed by a band called Adebishi Shank.*

Deviating somewhat from the barbed metallic attack and instrumental meanderings, Irish 5 piece BATS decide to the put fear of god in everyone with their hyperactive and unhinged post-punk noise, which you can’t help but smile at. A furious triple-layered guitar attack from a really promising act; with the set highlight being the handclap/chant of “BATS spelled backwards is STAB‘ (audience participation is a must) before launching into another murderous blast of noise punk.- fucking brilliant, please come back soon guys.

At half 10, Down I Go saunter on to the stage (or rather the area where the instruments are kept) and begin their last set of 2007 (the band are taking time off from touring to record their 3rd album, “This is Tyrantcore.‘)

“Apparently someone from a magazine is here to review us” says vocalist Pete, “so we better play well!” However, a cry from the back of the room indicating said person has left, resorts to much laughter and amusement from both the band and assembled crowd. After a quick run through of how the set is to be divided (Dinosaurs, Disasters, Robots and Tyrants) they rip straight into “Fight By The Volcano‘ like a Velociraptor stripping flesh from Robert Muldoon’s mutilated body (look up Jurassic Park on Wikipedia for this reference.) It doesn’t let up from here; after 3 more dinocore treats, including a brutal version of “The Hunt‘ (head banging should be made compulsory) we reach the disasters.

Notable highlights include the schizophrenic “A Wasp In A Jar‘ (Great Plague), “Time To Sell‘ (Stock Market Crash) and the wonderful “Sticky Nightmare‘ (the sight of a room full of people screaming “It’s a sticky nightmare!‘ as loud as they can is quite a spiritual and hilarious experience.) “Stay At Home And Die‘ rattles eardrums to the point of bursting, drowning the crowd in waves of thick guitar sound and crunching bass.

The set closer; “Turkmenbashi‘ has now become a staple ending to their live shows and you really couldn’t ask for a better track. As the song winds down; everyone is encouraged to sing as loud as they can 5 simple words: “Turkmenbashi, father of the Turkmen!‘ They respond in thunderous volume, drowning out the band completely. Never have I felt so united amongst such a group of strangers (save the 3 friends I was with); tremendous.

This is possibly the best small gig I’ve been to this year – I very much doubt I will find 4 similar bands, all playing the same night, for Â£4.

I remember reading a particularly interesting post on a message board once that said “British rock music was dead.‘ I would quite like to have taken that person in a headlock and thrown him into the crowd and then defy him to repeat said statement. British/Irish/Scottish/whatever rock isn’t dead; you just need to get off your arse and discover it and not sit around watching the same old mind-numbing toss that’s on MTV2 all day, complaining that music is going to the dogs; it’s not. Rant over, go listen to all these bands now, this is an order.

*(Can you see what I did there? Anyway, Adebisi Shank utterly blew me away. An instrumental 3 piece that had more effects pedals than all the bands Justin Pearson has been in. Whilst their drummer demolished his kit in the best way possible; i.e. hitting it repeatedly, the masked bassist and live-wire guitarist proceeded to play some of the most mesmerizing and intricate rock music I’ve ever heard. It fell somewhere between a more vicious sounding Battles and an even more disturbed version of Baltimore’s rowdy rebels, Oxes. Erratic time changes, coupled with the strangled squeals from the guitarists pedals, the trio pulled off one of the best performances of the entire evening – utter chaos. Fast, incensed and incredibly danceable Adebisi Shank are a fantastic live band, essential listening.)