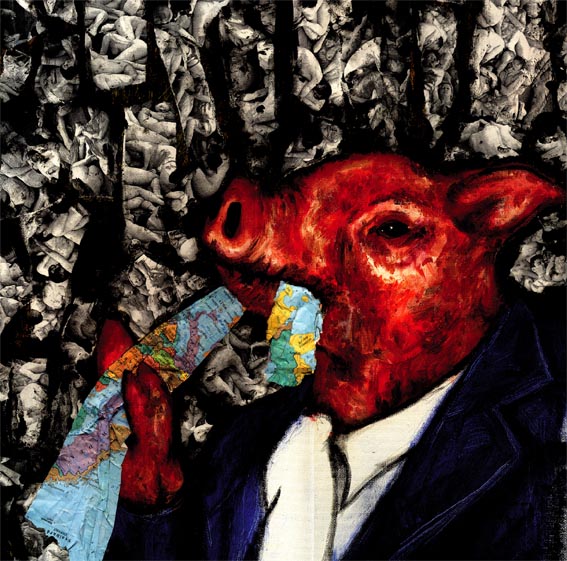 Whatâ€™s bugging me at the moment is the fact that this album and this band will no doubt be overlooked, which is a crying shame. Since their inception, the London-based 4 piece known as Down I Go have been on a wild ride, from self-releasing a concept album about Dinosaurs; to their first proper release ‘This is Disastercoreâ€™ (also, a concept record about 13 of the most horrific accidents in the world.) They then self-released the mini CD-EP ‘This is Robotcoreâ€™ â€â€œ 5 minutes of frantic, juddering noise-rock, before collecting themselves for their next album, 2008â€™s ‘Tyrant.â€™

In many respects, ‘Tyrantâ€™ is the iceberg that will sink any other bandâ€™s quest to make my ‘top album spotâ€™ at the end of the year; simple as that. What we have here is 12 tightly packed bottles of potent rage, ready and waiting to explode with the force of several thousand history books fitted with several tons of gelignite. ‘Tomas de Torquemadaâ€™ (the first Inquisitor General of Spain) already raises the bar way into the stratosphere with its volcanic energy. The meandering riffs and sporadic beats bring to mind the work of Botch, but even more relentless and guttural, whilst the string section adds a new dynamic to their sound, strengthening the melodic parts (the very few that exist!) like the wheels on a torture rack.

Grain-quaffing, land confiscating, murdering, Russian nutjob ‘Joseph Stalinâ€™ is next. Sounding more like a distorted space invader theme, this track morphs into one dangerous blast of metal, complete with the wondrous chant of “GLORY TO STALIN THE GREAT!” which I find myself shouting at passers-by nowadays. No wonder people cross the street. Possibly one of the slowest, but sludgiest sounding tracks, ‘Stalinâ€™ pulverises the listener with its starving hands, drowning the listener in feedback like rivers of blood.

–
Not even the Romanian leader, Nicolas Ceaucesu is safe; and quite rightly so, the bread-stealing, house-demolishing shithead. On ‘Ceasucesuâ€™, drummer Ben Standage adds his melodic, but gravely tone to the vocal proceedings, which compliment vocalist Pete Fraserâ€™s staccato range. Possibly the most catchy song about bread-shortages ever and some lovely gnarly feedback courtesy of guitarist Alan Booth. The finest moment however, appears in the form of ‘Saparmurat Niyazovâ€™, and ode to the leader of Turkmenistan; a man who had an ice palace constructed near the capital, banned dogs/beards/ballet and had a huge gold rotating statue of himself created that always faces the sun. Bonkers? Just a bit. A well known fan favourite, it truly shows Down I Goâ€™s potential as one of the best heavy rock/metal bands the UK has ever produced. The steady, rumbling build up that eventually erupts in the gang-chant climax of “TURKMENBASHI! FATHER OF THE TURKMEN!” is unsinkable.

The sinister tones of Marek Berezaâ€™s bass, herald the start of ‘King Leopold II,â€™ possibly one of the darkest, and sinister sounding tracks on ‘Tyrant.â€™ Pete and Benâ€™s vocals overlap to create a sinister droning monotone, backed by a throat-burning roar. In addition, the harmonies involved in the lyrics, ‘brutal torture, not your faultâ€™ seem somewhat unsettling.
Those looking for more riffs than they can handle, would do well to listen to ‘Henry VIIIâ€™ (he was a shit) at full blast. Itâ€™s a track that lurches around just like the wife hording, excommunicating, arm-flailing, fat bastard. The use of trumpets on the breakdown is a nice touch, adding even more body to the track as the lyrics ‘birth burdens your rule!â€™ are shouted like a drunken football chant, despite them actually referring to Henryâ€™s failure to acquire a suitable male heir.

‘Idi Aminâ€™ sees Down I Go rattle through 2 odd minutes of ‘difference of opinion’ style wordplay, by celebrating Amin as a glorious president, before slamming him for his irrational, brutal, racial and diabolical behaviour, backed up by some extremely techincal, glitch-heavy metal and some lovely ‘ooooaaahhh‘ backing vocals. Possibly the greatest bit about this track is the jam-session style jazz outro, that detracts from the harsh tones of the song in such a way, yet still feels part of the overall concept. Marvellous.

The closing track ‘Ivan The Terrible‘ uses the subtle but gorgeous string section that has backed most of this album to full effect in the closing 2 minutes. It’s quite an unexpected change, as the crushing heaviness of Down I Go’s sound is suddenly replaced with the soft tones of the violin, viola and cello; only to return at a calmer, but stronger pace, culminating in one of the best closing tracks I’ve ever heard.

Despite it’s modest running length of just over 30 minutes, Down I Go take you on a long and breathless ride. ‘Tyrantâ€™ is certainly their most accomplished work to date and sets an almost impossible standard for the next wave of British metal and hardcore bands to topple. Lyrically, itâ€™s a crash course in tyranny condensed into 12 rabid slabs of ferocious energy and erratically brutal musicianship. Oh yeah, just so you know – album of the fucking year.