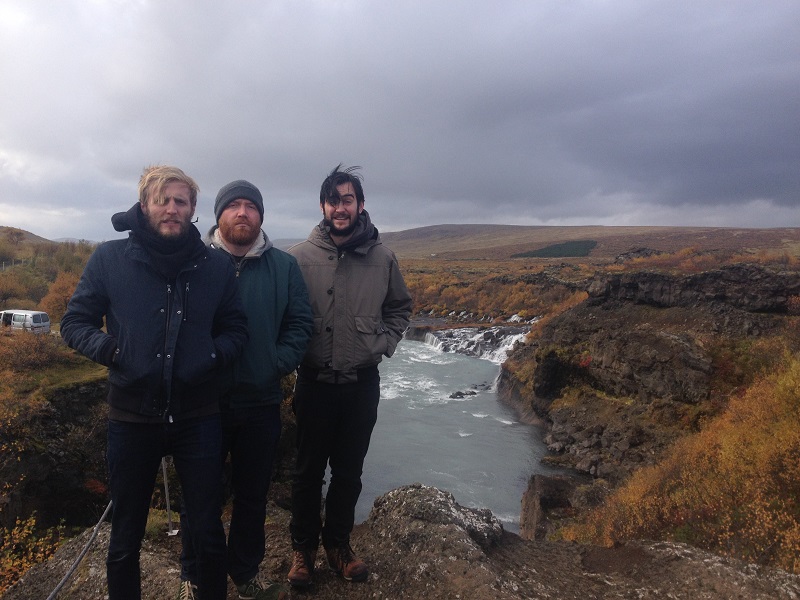 Band: Down I Go
Album: You’re Lucky God, That I Cannot Reach You
Label: Holy Roar Records
Release date: 28 August (Digital) and Vinyl pre-orders
Sounds like: Reykjavík in ruins. The Lagarfljót Worm rising from the deep. A mother in the pen.

“We had this idea of making a band based around dinosaur noises.”

Those familiar with Down I Go, will know that a Kickstarter campaign was put together by fellow/rival super-fan, Halldór Heiðar Bjarnason, who  invited them out to his Icelandic fljótstunga travel farm to record a new album.  You’re Lucky God, That I Cannot Reach You is the warped fruit of their labours and takes the weird metal-hardcore-jazz-harmony-happy-screaming mutation of Down I Go’s sound and amplifies it to the heavens, eclipsing the experimentation that was on Tyrant and even the deranged cluster of metallic noise that was the Gods EP. Again, they’re barely taking themselves seriously – from the odd-ball song titles (Strike It While It’s Still On My Nose) to the erratic blasts of air-punch-worthy brass; it’s party-metal in a similar vein to Norwegian mead-chuggers Kvelertak, but executed in a way that’s completely different. Plus, it’s about ancient Icelandic culture – natch.

The opening track, Mother In The Pen, sets a wonderfully sombre but no less disturbing tone to You’re Lucky God… in that it’s far removed from what you might consider Down I Go to sound like. On vocals is not Pete Fraser, but Tim Elsenburg of Sweet Billy Pilgrim; delivering a soft, ethereal mantra over the ancient drones of a church organ, alongside some muted percussion that taps away in the background. “Take my swaddling rags to dawn and dance with them.…” chants Elsenberg, letting the growing trepidation build on this disconcerting and haunting opener. It’s the calm before the inevitable beatdown though – second track, The Serpent Of Lagarfljót, uncoils suddenly, attacking like only a 39 ft monster from the deep could. It’s a jagged, wrenching scattergun of stabbing guitar riffs and overlapping vocal yelps that are delivered with enraged, neck-straining intensity, whilst still having time to throw in some gang vocal harmonies. When the horns kick in though, it really becomes something special – like Rocket From The Crypt jamming with mathcore-legends Botch and the trombone solo (courtesy of Tom White) is simply sublime – this is re-inventing modern hardcore at its finest, crafting it into something bursting with experimentation and layers of intricacy. The gut-rolling riffs on The Hired Hand & The Lake Dwellers continues where Lagarfljót left off, cleaning things up vocally and opting for a more post-hardcore lean, but loses none of its intensity and danger – guitars screech and wail during the cluster-fuck of chaos that happens around the 1:10 mark, as screams meld into a huge caterwaul of insanity, only to be softened by the melodic vocal chorus breaks – “smells like human” indeed.

You’re Lucky God, That I Cannot Reach You takes the weird metal-hardcore-jazz-harmony-happy-screaming mutation of Down I Go’s sound and amplifies it to the heavens…

On  The Slaying of Skeggi, Down I Go batter the listener with a torrent of oddball theatrics – from Jamie Lenman’s throat-ripping screams that open the track, through to the fateful Gregorian chanting and back to Lenman completely losing his mind, howling, roaring and spitting a ramshackle tirade. The monks that are making this chant won’t be stopped though, returning to battle Lenman’s inhumane growls over the bending, harrowing noise being punched out by guitarist Alan Booth and stickman Ben Standage, who add an almost Mastodon-edged groove to this stamping, battle-metal attack.

Of Marbendill was the first track I heard from YLGTICRY, (thanks to Daniel P. Carter) and I must have re-played it about 20 times. The structure and sound is classic Down I Go; a groove-heavy meandering gait of math-rock complexities, tight, thunderous bass bubbling beneath the surface, punching blasts of brass on the chorus, all tied together through a fast punk rock pace and hoarse vocal screams. An absolute classic, plus some great dual vocals from drummer Standage on the second half of the chorus and the first time we clearly hear both him and Fraser in unison – splendid.

There’s more room for experimentation – the Faith No More eccentricities of Strike It While It’s Still On My Nose are a glorious trip through a mutating explosion of sounds. From the strange beauty of the opening minute, topped off with a hum of electronic fuzz, muted drum-taps and dual vocal crooning it sets a high-bar. Things then start to get weird. The almost choral chant rises and rises, backed by the blasting brass, stop-start rhythmic time-changes, schizophrenic cries, finishing with the song’s title being screamed over and over in some desperate attempt to remedy the situation. “Give me a cow for milking and a good one too. Give me some grain for the pot or taste my cudgel” states Fraser and Standage on the mind-shredding hardcore thrash of My Old Lady Wants Something For Her Whorl, which is a runaway minecart of jazz-groove metal, gang-vocal chanting and screams for “the tallest ladder to climb to Heaven.”

An Outlaw Killed melds disgruntled, aggressive riffs and Fraser’s snarling yelp together perfectly over 2 minutes of thrashing, noisy hardcore, whilst Drangey Consecrated is another heady amalgamation of parping horns, spliced with the off-kilter, see-saw riffs, not to mention the melodic mid-section, which makes full use of the orchestral backing and a melancholic Fraser’s ever-changing set of pipes, which sound a million miles away from his usual Tyrannosaur-yelping.  Final track, The Sending, is a perfect, albeit bonkers closer. There’s more of that almost-Gregorian chanting, notably: “GO FORTH AND DISPATCH OUR ABSENT BROTHER” (which has the same hypnotic drive as that of Saparmurat Niyazov from Tyrant) whilst the pounding instrumental is a rising slab of air-punch-worthy, progressive rock that swells and bursts with savage and hopeful pride. Then, the fateful pensive chords of Mother In The Pen return (this time with Fraser on vocals) but it’s different – it’s been slowly corrupted over the last half-an-hour of harrowing and grim folklore and starts to splinter apart through a humming buzz-saw bass guitar, spluttering chords and an eerie, hollow drone of descending, warped turbulence. At last, the circle is complete.

My word. Let’s cut the bullshit, You’re Lucky God, I Cannot Reach You is the best thing Down I Go have committed to tape in their 10 years of being a band. The amount of passion and determination they’ve poured into this is utterly staggering. From giant worms, to mermen, to striking things from my nose, this is Down I Go delivering their own brand of ‘-core’ through a rich tapestry of ever-changing styles, shapes, sounds and exhilarating, infectious pandemonium.

Anyone for a kickstarter campaign to get them to tour this beast? I’m game, seriously. Listen to You’re Lucky God, That I Cannot Reach You below and for the love of that God you cannot reach, buy it.

“Carry the wretched chest out to the lake, cast it into the watery depths. Sink the damned thing to the bottom. Get this king snake out of my life forever.”

Down I Go
Down I Go Twitter
Holy Roar Records