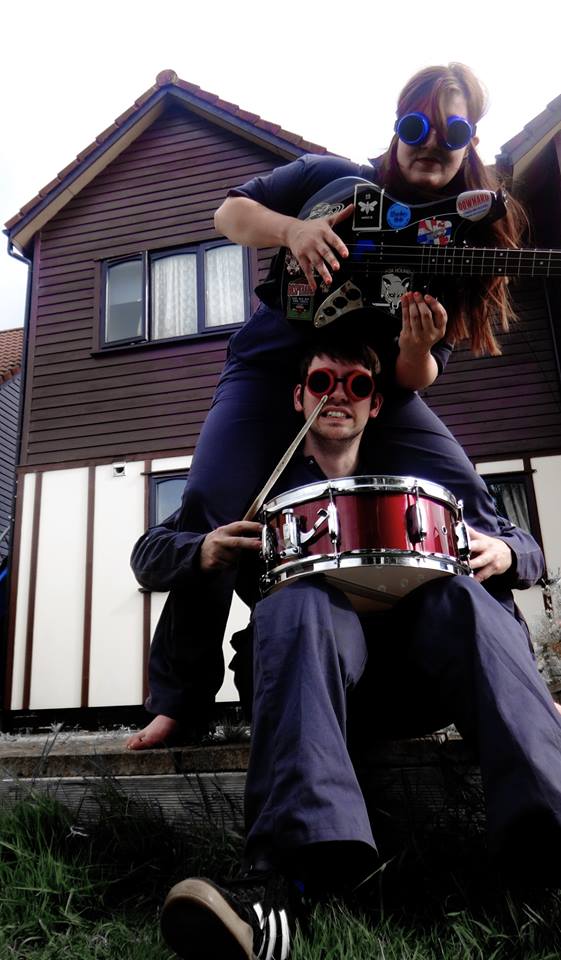 Downard are an unusual concept and creative force – hailing from Bristol and comprised of Katie-Sue Louise Mizen on swamp-sounding bass and Andy Robin Pickett hitting things and shouting. Despite this minimal set up, Downard make use with what they’ve got, stretching their caustic and frothing sound far and wide through the liberal use of effects pedals, weird-times changes and the kind of scrappy, barbaric percussion that was last heard blasting out of the first METZ album. If it sounds like it’s rusted to the point of disintegrating apart, then it’s committed to tape – that’s Downard’s motto.

Agony City is quite an apt name really – opening track, Glad, kicks off with drummer Andy screaming, followed by the chant of “SURRENDER HERE!” (I think?) through a crackling, distorted microphone, which warps his voice around Katie-Sue’s wailing, agitated bass. As Downard launch full force into the world of Agony City, there’s a very Therapy?-esque bite to this; the grimness, stark alienation, laced with a cutting and amused grin. The crackling drone of Velcrow shudders in and already, this industrial fizzle of spite and ramshackle percussion is jarring and tinged with creeping dread and see-saw riffs. Foul Play sways along a tense tightrope of taunt bass, skirting the outsides of your consciousness; while the rambling distorted vocals are spat through a megaphone of agitation and feels very We Are Knuckle Dragger in execution; spiky, scraping and slightly unhinged.

The Faith No More-funk-metal twang of Coughing House is wondrously diverse and bizarre. A mostly instrumental piece (save for the track title chanted over and over near the end) this wallows in the waters of low-end, sludge-rock, crunching and splintering through with grim determination and some interesting wailing keys thrown in for good measure. The swaying shanty of Pigs On Board wouldn’t sound out of place in a rammed, booze-drenched bar. You can almost smell the whisky on the breaths of the assembled masses – a groggy, punk-metal blast that gets progressively weirder and darker. This is the sort of thing Al Jourgensen would record if he spent all his life on a boat, instead of riding in a hotrod. St Phillips rounds off Agony City and is probably the most straight forward track on offer – a simple, 92 second blast of raucous, clattering noise-pop haste. An intriguing prospect, Downard skitter, smash and battle their way through this warped portal of oddball ideas and riffs all laced with slightly morbid humour and amusement.

You can buy Downard’s Agony City from their bandcamp below – treat yourself.