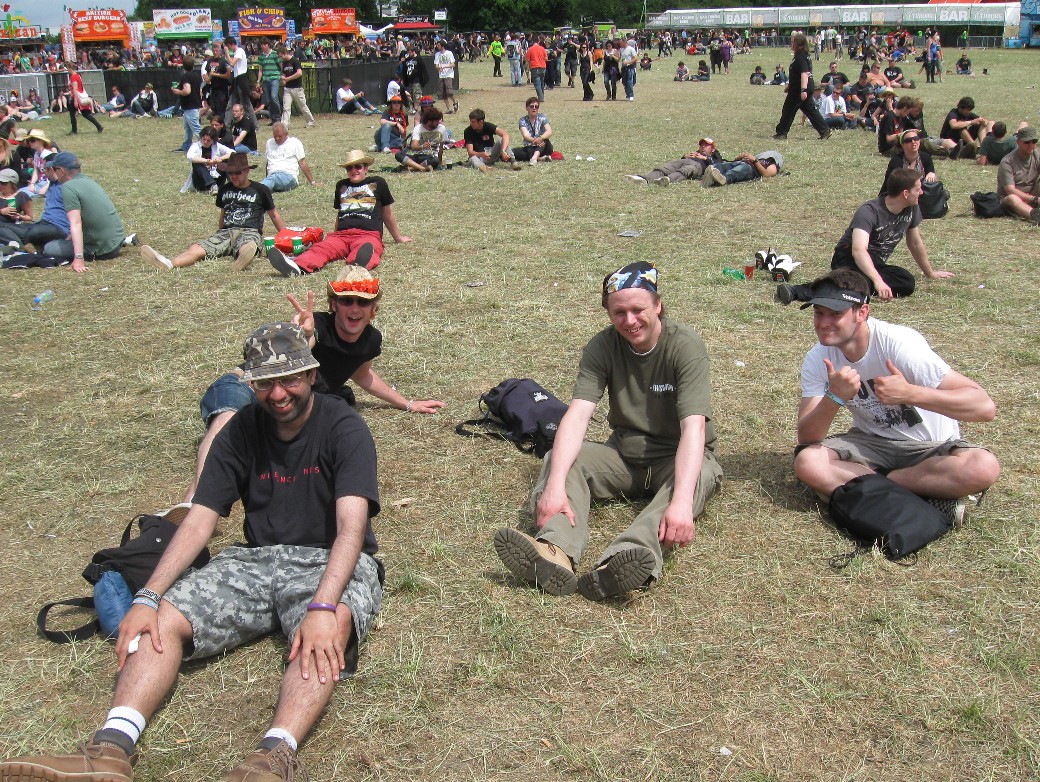 Sunday morningâ€¦the sun is blazing down and yet another warm lager and apple is consumed whilst reading Viz seems like an acceptable start to the day.Â  It has worked the last few mornings, so why break what has been a good routine so far. By now the weariness has set in and my lack of sleep the previous night after some truly epic snoring from the tent across from me, theÂ kareoke in the hat tentÂ and the chuffers who will be first up against the wall, what with their incessant cries of “BUTTSCRATCHER!” Jog on, numpties.

Itâ€™s to the second stage for Canadaâ€™s 3 Inches of Blood [7] who are as hilarious and over-the-top as expected. Vocalist Cam Pipes channels Rob Halfordâ€™s ear-piercing shriek perfectly, whilst the band whips out razor-sharp lashings of concise battle metal. Notable highlights included a rousing rendition of â€˜Sword Masterâ€™ and a barbaric blast through of â€˜Deadly Sinners.â€™ Not bad for a bunch of Warhammer-obsessed fanatics.

Saxon [6] play a tight set of focussed granddad metal that does nothing for me, however the singerâ€™s remarkable likeness to Peter Stringfellow (long, flowing white hair, the shuffled movements akin to someoneâ€™s dad, drunk at a disco) raises a smile. They play through their entire 1980â€™s â€˜classicâ€™ ‘Wheels of Steel’ and chuck in a few extra tracks, which I think helped contribute to the time changes/band clashes that RATTâ€™s absence left.

Cinderella [2] are completely dire and falling asleep takes precedent over standing through the rest of their woeful set. Finally, Slash [10] makes himself known and Sundayâ€™s Download gets a firm kick up the backside/guitar smashed around the face. Joined by Alter Bridge vocalist Myles Kennedy, Slash puts on one of the performances of the festival. The hour long set is packed full of covers, notably 4 Guns â€˜N Roses songs, not to mention a version of Velvet Revolverâ€™s â€˜Slitherâ€™, expertly sang by Kennedy, whoâ€™s voice is nothing short of incredible. Take note Scott Weiland, this is how a frontman should be. The enthusiasm of Kennedy, who seems a little taken aback at times at the warm reception he receives, not to mention Slashâ€™s dry humour and note perfect playing is how every band should be on a Sunday afternoon. â€˜Night Trainâ€™ and â€˜Sweet Child Of Mineâ€™ are note perfect, (particularly the latter, which causes the biggest sing-along of the whole weekend) with Kennedyâ€™s incredible singing voice streets ahead of the drawling stutter of Axel Rose. Lemmy joins Slash for â€˜Doctor Alibiâ€™; instantly transforming the song into a more guttural version of Motorhead. As the opening bars of â€˜Paradise Cityâ€™ ring out, the second biggest sing-along of the weekend kicks into gear, thereâ€™s no denying that Slash is truly exceptional â€“ both as a musician and as an act. Could have (and perhaps should have) headlined playing nothing but G â€˜N R covers. Superb.

Billy Idol [9] brings three Râ€™s to Sunday afternoon = rock, roll and rain. It doesnâ€™t just spit â€“ oh noâ€¦it absolutely chucks it down. Idol is however in good spirits and doesnâ€™t let the rain dampen his performance. He throws himself into it with feverish gusto and complete disregard for his own safety. Halfway through the set and heâ€™s climbing over soaking people in the pit, running around the death-trap of a stage, sliding into barriers, all the while swinging his microphone like some crude slingshot. As the PA system begins to crackle and pop, vocals are momentarily lost at times, which results in several mic changes and one amusing moment where Idol is seen testing ALL the mics on stage to find them nearly all completely knackered. All the hits are played though, which is what the audience wants. Opening with a rousing version of Generation Xâ€™s â€˜Ready Steady Goâ€™ and followed up by â€˜Dancing With Myselfâ€™ Idol storms the main stage. My one gripe is the lack of material from â€˜Devilâ€™s Playgroundâ€™, except for the single â€˜Screamâ€™, which despite its hilariously stupid lyrics, is a massive punk rock anthem and one of the set highlights. Idol strips down to his vest and then loses it all together during some sections, reminding me somewhat of a certain peroxide vampire. His cover of â€˜LA Womanâ€™ by The Doors is changed to â€˜Donnington Womanâ€™ to rapt applause whilst the acoustic first half of â€˜White Weddingâ€™ is chilling (although this could be because I was soaked to the skin). â€˜Rebel Yellâ€™ closes what has been set slightly marred by the heavens, but on the whole a terrific slice of snotty 80s new-wave punk rock attitude. Come back next time Billy, but leave the rain yeah?

Having returned from my tent after getting absolutely drenched (seriously, the walk back seemed to take hours), missing Steel Panther was a crushing blow. Here was a band we had been chanting the lyrics of all weekend and due to an act of god and my mate being soaked to the skin returning to base was the only option. Thankfully, though, Airbourne [10] made me forget missing singing along to â€˜The Shockerâ€™ by being absolutely freakinâ€™ awesome. The rain actually made their set seem more grittyâ€¦more aliveâ€¦.maybe the fear of electrical shock from the shear volume of the wet stuff. Anyhow, Airbourne rock like absolute bastards, their sleazy, AC/DC meets Motorhead rock is fantastic. Vocalist Joel Oâ€™Keeffe screaming phrases such as â€œARE YOU READY TO ROCK?â€ and â€œROCK AND ROLL IS ALIVE PEOPLE! IT BEATS IN OUR HEARS! IN YOUR HEARTS!â€ like heâ€™s been possessed by the spirit of Dio after downing too much whisky. The set highlight however features Oâ€™Keeffe scaling the side of the stage to play a guitar solo. In the rain. On top of the second stage. The man is frankly insane. How he doesnâ€™t get electrocuted/fall to his death I will never know. When the sound guys finally cut him off, the assembled crowd whoâ€™ve had their hearts won by the 4-piece begin booing, and screaming â€œAIRBOURNE! AIRBOURNE! AIRBOURNE!â€ like they have been possessed by some enraged rock â€˜n roll god. As Oâ€™Keeffe makes it back on to firmer ground, the atmosphere is incredible. By an act of stupendous bravery, this man has won the hearts and support of thousands. Excellent work from him and indeed the rest of Airbourne â€“ true entertainers.

However, â€œtrue entertainerâ€ are two words that obviously donâ€™t fall into Scott Weilandâ€™s vocabulary as the newly reformed Stone Temple Pilots [2] stagger through a set that even they look bored playing. Weiland is obviously off his face on whatever illegal substances he can shove up his backside and from what I see of their fairly lacklustre performance, features the old cokehead shouting his slurred vocals into a megaphone, distorting the sound and making him and the rest of their set seem even more tedious than it already is. Good work, you utter penis.

Aerosmith [7] are a paradox. They are good, but disappointing at the same time. Whilst explosions, bright lights, Steve Tylerâ€™s sparkly suit and his trademark â€œyyyooooowwwwwlll” dominate the show thereâ€™s no real soul. It feels a bit empty to be honest. The rock is there â€“ no doubting that, but maybe the result of the incredibly inclement weather and my sobriety it doesnâ€™t have that edge. â€˜Eat The Richâ€™ is suitably raucous however, as is â€˜Livinâ€™ On The Edgeâ€™, but thereâ€™s very little on offer to keep me interested. Being too much of a casual Aerosmith fan, their set doesnâ€™t really appeal which is a great shame. Notable absences from the set include â€˜Pinkâ€™ and â€˜Rag Dollâ€™ much to my chagrin of the latter and to my friendâ€™s on the former. Thereâ€™s also no â€˜Crazyâ€™, but instead we have to put up with a run through of a song that helped make a movie staring Bruce Willis almost unbearable to watch â€“ â€˜I Donâ€™t Want To Miss A Thingâ€™ in all itâ€™s overblown, moist-eyed, sappy-rock glory. Thank god for the encore of â€˜Dream Onâ€™, a stomping blast of â€˜Walk This Wayâ€™ (sadly, no Run DMC in attendance) and â€˜Toys In The Atticâ€™ to round off what has been a strange set, that was possibly not suited to my taste, but seemed well received by the assembled masses.

With the sound of Steve Tylerâ€™s irrepressible howl still ringing in my ears, I make it back to camp to finish off the lager and sit outside on a chair listening to speed metal, contemplating on what has been a fantastic Download Festival and one I will look forward to repeating next year.