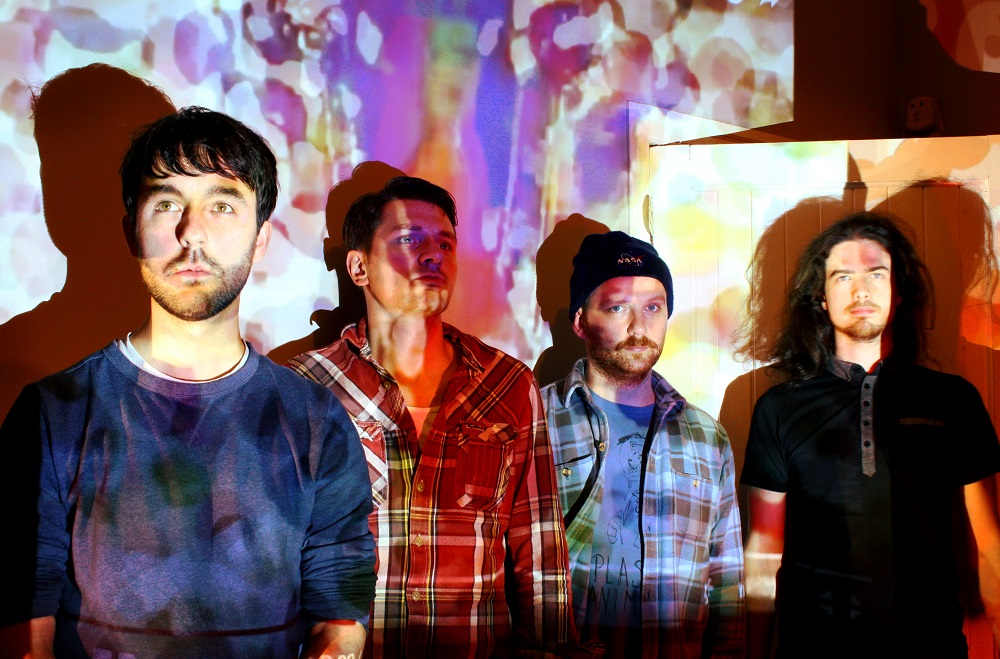 ‘Gin and Swearing’ is listed as the genre for DTHPDL‘s new EP, The Future. We’re off to a strong start and I haven’t even pressed play yet. DTHPDL (pronounced ‘Deathpodal’) is four-piece band from Edinburgh, started by frontman Alistair J Chivers, with the help from  D. MacDonald, Humdrum Jetset and Ross Taylor (on this recording).

(Interesting fact, you can make my actual name up out of that – Jetset D. Drum, pleased to meet you).

Why am I getting the feeling of a Hesitation Marks-era Nine Inch Nails from the opening title track? The trickle-down electronic twang, the rising keyboards, the twitch of a grin as it all begins to take shape. A morose feel engulfs this, alongside the bass-heavy programming which feels thick, chunky and absorbing, not to mention extremely melodic, with a dirty shoe-gaze vibe. The next track, Captain Average has a much sunnier disposition – post-punk guitars and a surf-rock ambience underlay this, alongside a very theatrical delivery from vocalist Chivers, whose voice is akin to a more nasally version of Neil Hannon in places.

There’s a dream-pop vibe to Good vs Evil – it glows with rich, electronic warmth all the way through. The whispered, overlapping vocals are somewhat buried in the mix, giving it an ethereal tone. The drum solo at the halfway mark comes almost out of nowhere, before letting the track continue on a path that doesn’t sound a million miles away from the new-wave pop style of California’s Ozma – vibrant, colourful and full of compassion. Leading us nicely to the forth track, Summer and its ridiculously joyful keyboard flourishes, which chirp and bleep away under the bouncing Weezer-lite pop-punk chords, whilst the vocals are delivered with gusto, and earnestness by Chivers, making this under 3-minute slab of spirited, emotive rock a pleasant and rich slice of harmony. The Future EP closes with an instrumental piece, Sparkle and Melt – a colourful, post-rock-esque trip of shifting sounds and ambience; adding a layer of complexity and depth to DTHPDL’s ambitious and hybrid-grunge-pop sound.

Those of you in Edinburgh next week can catch DTHPDL for their EP launch show on the 22 April at Leith Depot. Support comes from Miracle Strip and Lush Purr. More details here.

Stream the title track below and purchase the limited edition cassette of The Future, for a mere fiver from their bandcamp. Treat yourself.