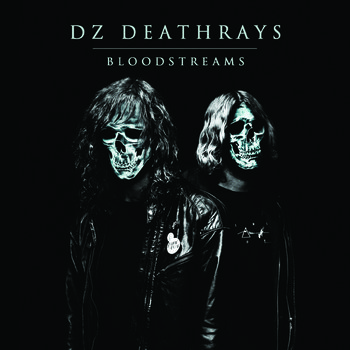 –
This album will make you want to buy a leather jacket.

You want to know what this sounds like? Think of all the best scenes from every single typical U.S. frat-party teen-film youâ€™ve seen and then add in a band that sounds like Death From Above 1979, playing faster, harder whilst inhaling the ashes of Fonzie. Thatâ€™s what â€˜Bloodstreamsâ€™ amounts to.

DZ Deathrays are a duo, (guitar, vox and drums) from Brisbane and were essentially formed to play house parties, which is apt considering their music sounds like one big scene from 10 Things I Canâ€™t Hardly Hate About Superbad Old School American Pie. Like how Arms & The Man make you want to start hi-fiving people, DZ Deathrays make you want to arm-wrestle them afterwards then jump around in a restricting bear-hug of sweat, beer and chaos.

Similar to other duos, like Japandroids and the aforementioned DFA 1979, DZ Deathrays make sure their minimal set up is cranked into overdrive. In fact, their raucous, no-nonsense party attitude has more in common with Leeds terror-train mob, Pulled Apart By Horses â€“ that same unhinged, splatter-punk attitude and joyful determination. â€˜Teenage Kickstartsâ€™ is a perfect example of this, living up to its title perfectly. A raucous, screeched vocal attack rides on a wave of crusty, rumbling 2 minute punk rock that roars, spits and bites and could quite easily have fallen off the recording sessions from â€˜Tough Love.â€™

â€˜Cops Capacityâ€™ follows a similar vein, albeit a denser, more concentrated attack on the senses. The full-on caterwaul of Parsons’ guitar is a mesmerizing shred of discordant noise mixed with erratic drumbeats. To say it mellows around the halfway point would be a lie â€“ the intensity is ramped up, with a taunting build of swirling, psychedelic guitar licks, backed by Simon Ridleyâ€™s slick beats that explodes into a blaring roar of high-fives and stage-dives.

The sinister organ tones on â€˜Play Deadâ€™ are a wonderful change of pace, on a track is laden with dread. At the opposite end of the spectrum to the splatter-fest of chewed-up riffs and pummeling, â€˜Play Deadâ€™ has a dark, Cold Cave-esque melodrama about it and is easily one of the stand out tracks on â€˜Bloodstreamsâ€™ for itâ€™s non-cheesy, horror-rock styling, which makes it really rather appealing.

â€˜Gebbie Streetâ€™ is the coolest song you will hear this year: FACT. Seriously; the amount of cocky, mother-fucking swagger on this is unbelievable. The guitar is a squelching, dripping throb of filth and depravity, whilst the drums beat out a caterwaul of bitter garage rock noise. â€œYou know our bodies make the right conversationâ€ croons Parsons. Itâ€™s like a sleazy version of â€˜Black History Monthâ€™, but better. This is the song to get bodies on the dance floor â€“ either gyrating or doing the horizontal Charleston.

Inevitable Death From Above 1979 comparisons rears their majestic elephant heads in the form of â€˜Dinomightâ€™. The feedback-soaked guitar, humming like a grumbling bass, the husky, drawled vocals and sudden yelps of frantic excitement and noisy cymbal crashes are an absolute delight. â€˜Dollar Chillsâ€™ is another blitz of sonic destruction, howling synthesizers and a strutting beat that is reminiscent of Electric Six smashing their instruments to pieces.

â€˜Debt Deathâ€™ is just over 2 minutes of Eighties Matchbox B-Line Disaster, meets an ominous preacher. The raw, overblown heaviness of the opener, combined with the emotionless, vocal chant spirals out into a mess of hypnotic, trance-like keys and a desolate whine.

Closing track â€˜Trans AMâ€™ has the logical conclusion sound to it. It starts off quite sedate and tuneful, when compared to the previous 10 or so tracks, which have been a full on assault to the senses. Thereâ€™s a dark, 80s vibe running through this, like itâ€™s sound-tracking Ryan Goslingâ€™s emotionless scorpion-jacket wearing psycho stunt driver. Even the bit that sounds like itâ€™s going to morph into a massive crashing breakdown mellows out to this weird tense vibration of mangled synth-distortion and steady percussion.

Iâ€™m unsure as to the hype that has surrounded DZ Deathrays but on the strength of this â€“ all entirely justified. â€˜Bloodstreamsâ€™ is a storming, fist-pumping, teeth-rattling blast of trashed rock â€˜n roll arrogance with enough surprises and twists to keep you entertained for a long, long time.