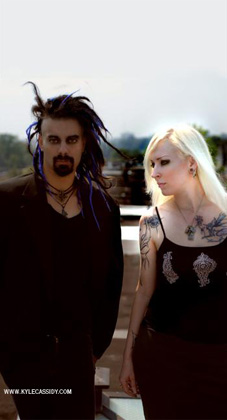 When the team threw cyber shapes to Angelspit a few weeks back there was a supporting act that really took my eye, known as the almighty Ego Likeness.

The beautiful sounding duo took their name from Frank Herbert‘s classic science fiction novel Dune and began as an experimental/ dark trip hop project. A demo called “Songs From a Dead City’, recorded on a four track, was released in 1999.

By 2000, Steven Archer and Donna Lynch were moving the project in a darker electronic/dance direction, resulting in a self-released full length album entitled “Dragonfly‘.

Through the years they have progressed onto a heavier rock sound which really reflected when they played live. As Archer danced in and out of the green beams of the stage lights, ripping into his riff-tastic guitar, Lynch wrapped the tunes up in a fine layer of vocals.

Their third full length album, “The Order of the Reptile‘ (release date July 4th 2006, Dancing Ferret Discs) ventures back into the realms of heavy electronica, with a spicy pinch of trip hop and darkwave.

I got a chance to speck to Archer about burning venues and the almighty Hoff! This is what he had to say:

1) To a person in the crowd who has not heard if you before, what can they expect?

2) What is more important to you, producing the music or performing it?

They are opposite sides of the same coin, just different ways of getting our ideas out into the world. The live show is a very kinetic experience, where we can directly interact with the audience. The studio is more of a direct extension of ourselves a place where we can explore and develop ideas.

3) What is the weirdest thing a fan has said to you after a show?

Honestly, I wouldn’t know where to begin with that one. Weird is so relative. It’s always strange, yet flattering, when people you don’t know tell you very personal things, which happens fairly often.

4) When I saw your show earlier in the month you came across as very confident in your performance and successfully rocked the place! But were there any difficult gigs in the early days of the band?

Sure, there always are. But after 300+ shows, we have worn most of the edges off. Apart from the venue burning down while we are on stage there’s not much we can’t handle. We always try to turn any problems into learning experiences.

5) If a D-list celebrity, say David Hasselhoff, decided to cover one of your tunes for personal gain, would you be flattered, or sue their asses off?

If you like the track why not cheak out thier offical myspace area or cut to the chase and buy all their cds!