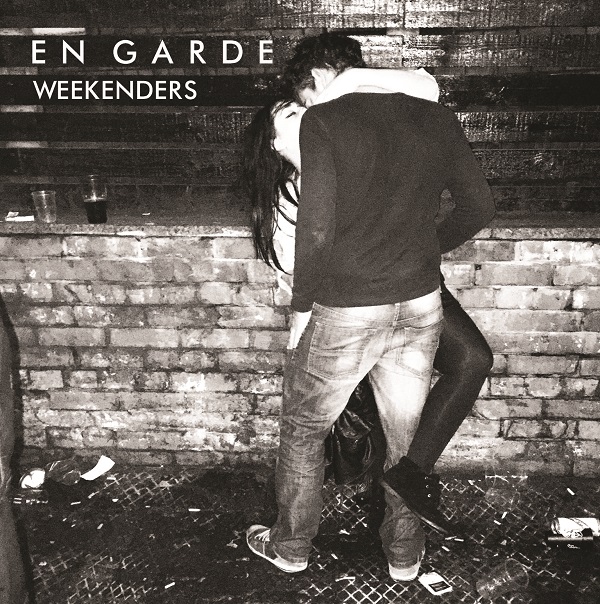 Band: En Garde
Album: Weekenders
Label: self released (will be available as a free download from the En Garde bandcamp)
Release date: 31 January
Sounds like: Stage dives, high-fives, being radical.

Spitting stale beer into your face and clattering you around the head with a punch that is half-friendly, half-laced with malice, En Garde have already dismissed you as ‘boring’ and have torn their shirt off and are swinging the ripped halves like some mad flag-waver, braying and howling with eye-popping zeal. They’ve come to party and that partying will be done…hard.

There’s no frills in this – in fact, if any ‘frills’ existed at one time, they were set on fire and repeatedly jumped on until they resembled fragments of lost, fallen ash. En Garde are a punk rock band channelling the exquisite berserk rage of Gallows, mixed with the hardcore fury of Blowgoat (RIP) and the scathing bile of Golden Tanks. Of course, this is right up my street – so far in fact, I’ve invited it in for tea and flapjacks. The raw, untamed energy that pulsates from Weekenders is breathless and infectious in equal measure – “I SOLD MY SOUL TO ROCK ‘N ROLL!” erupts from the red-raw throat of their frontman on opening ball-smasher, Idols; roaring his lungs hoarse over the churning spittle of raucous rock ‘n roll hardcore.

You would swear the title track fell off the third Bronx album – it has that familiar, scrappy punk-rock edge on the fuzzy guitars, complimented by the hoarse vocal yelps and a blisteringly powerful chorus of air-punch joy. It’s a ramshackle, drunken blast of mic-smashing good times, which is something En Garde seem to be all about. The hook-laden thrash of Rats is equally cacophonous, laced with a killer groove provided by En Garde’s viciously tight rhythm section and the almost Every Time I Die-guitar squeal. The superbly titled No Conscience, Barely Conscious gives a nod to Kevin Baker’s BARS project – huge meaty power chords replace the usual three-chord smash-up, completed with gang-vocal chants and cries of losing control; finishing with a crunching metallic breakdown that wouldn’t sound out of place on a Killswitch or Seemless album.

En Garde are a punk rock band channelling the exquisite berserk rage of Gallows, mixed with the hardcore fury of Blowgoat and the scathing bile of Golden Tanks

The bruising trashing of Black Eyes/White Lines sounds like a giant piss-up in a brewery; screams of “INTOXICATION!” That irrepressibly, cocky swagger of punk rock degeneration and the closing 15 seconds of cheering, screaming, hand-claps and backslapping. On final track, Dionysus and Drugs, you, the listener, are implored to: “PUT ON YOUR DANCING SHOES AND LET YOUR FUCKING HAIR DOWN!” – It’s not so much an ask as an order that you will follow, whether you like it or not. This strident and sleazy slab of infectious hard rock is an excellent closer to what has been a battering ram of a ride.

Whilst En Garde aren’t reinventing the wheel, Weekenders is a “come at me bro” to other UK punk rock bands in 2015. Exhaustingly fast, tight and rampant – En Garde will knock the breath out of you and throw you into the lion enclosure at the same time. Get on it.

Download/listen to Rats from Weekenders from the player below.