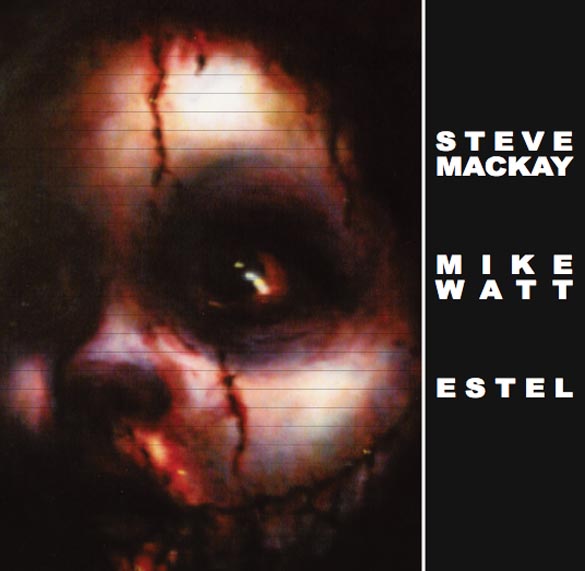 Iâ€™m actually a big fan of improvisation. A lot of my writing stems for just sitting down at the computer and just going for it, which is why so much of it is rambling, boring and uses such awful analogies. The feeling I have about ‘Untitledâ€™ is further confirmed from reading an excerpt from Mike Wattâ€™s tour diary, which has been scribbled in the linear notes. From what Andrew Bushe of Estel states in a very brief paragraph below Wattâ€™s; Estel had gone in to record with Watt, only for Steve Mackay to turn up and ask to be in on what they were recording.
Itâ€™s essentially a jam sessions album, where a group of like-minded individuals have been brought together, wandered into a studio and just started playing and playing and playing and this is the resulting cut, plus a version of one of The Stooges most famous tracks, ‘Fun House.â€™ I mean, this is all presumable: thereâ€™s a feeling that Estel, Watt and Mackay had down what they were going to record and this was the result, but to me, it has that air of unpredictability and awe that suggests that it all feels like a scene from Curb Your Enthusiasm in its nature of creativeness.

The intro on ‘Matthewâ€™ is a ghostly, crackling start that smoothly slides into a warm saxophone flourish, like a malt whisky being liberally poured into a crystal glass. Its gait is somewhat plodding, yet picks up the pace into becoming a drunken march, punctuated by the echoing keyboards and distant fuzz in the background. ‘Matthewâ€™ is a strange opening track; it doesnâ€™t seem to go anywhere as such; yet builds on this solid repeated verse by adding more and more instruments and sounds to create a silky, yet mellow piece of instrumental rock.

‘Markâ€™ is suitably chilling and ostentatious; starting with a sinister bass groove and steady drumbeat that is suddenly hit by a strained saxophone drawl and the kind of keyboard effects that were last heard in a Christopher Lee movie; involving a guy who has no reflection, doesnâ€™t go out in the sun much and hates bits of wood named ‘Mr Pointy.â€™ In fact, it all sounds like something from Papa Lazarouâ€™s Pandemonium Carnival â€â€œ I have this image of Reece Shearsmith, orchestrating the band in some mad-scientist/unhinged conductor style, constantly cackling with glee over the pure circus of noise that they are creating. Imagine the ‘Phantom of the Operaâ€™ theme being played with the music sheets upside-down. Creepy doesnâ€™t even begin to describe it, but yet itâ€™s easily the best and personally, my favourite track on this recording, just for the downright disconcerting feel I have about it.

On the cover of ‘Fun Houseâ€™ I kept expecting lounge-jazz crooner Richard Cheese to pop up with his distinctive twang and run through a suitably hilarious version of the track. Thereâ€™s not much to say about this, as itâ€™s pretty much a faithful cover, but with added keyboards making up for the lack of Iggy slurring over the rambling madness of it all and the scuzzy edge of the original has been shaved off. Mackay seems to have been given free reign with his sax, dousing ‘Fun Houseâ€™ with a thick layer of eccentric parping.

‘Lukeâ€™ is the only track to not feature the brass talents of Mr Mackay and feels slightly alien compared to the other tracks. Nevertheless, it cuts a sharp line in ambience, acting as a musical wash of sound built on the same repeated drum roll and some trippy electronic whirls that brings to mind Alias & Ehren. It kind of has a very placid, almost hip-hop vibe, without actually being hip-hop; bursting with wraithlike haze.

‘Johnâ€™ equates to something you would hear over the top of a piece of film running in slow motion; possibly during a ‘coming to terms withâ€™ scene or one where the lead character shoots up a load of class A and blissfully passes into the world of dreams and confusion. Itâ€™s a soft, ethereal piece of looping jazz that warbles and reverberates in the right places to keep the listener interested through its distinctly progressive ride. An interesting collaboration that might seem strange at first, but with perseverance, is ultimately rewarding – bloody freaky cover art though.