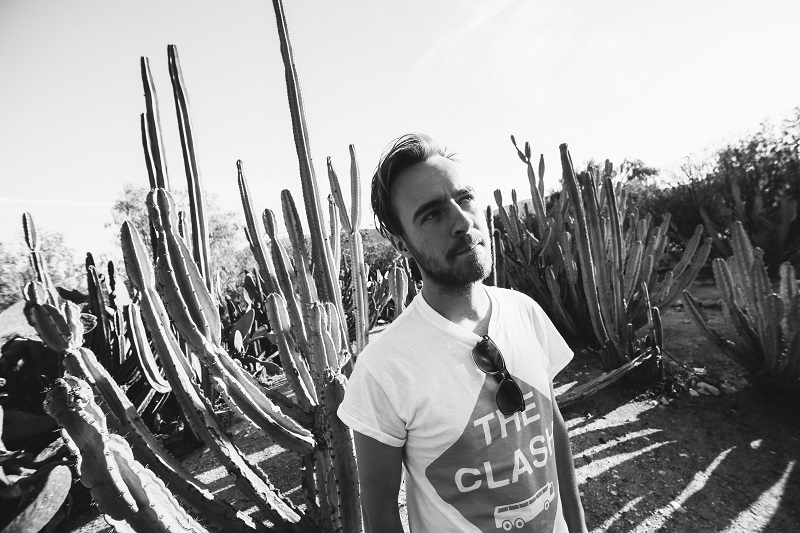 Those of you may remember from last year a feature on Axis Of, celebrating the release of their most recent live album, Companions. Whilst the band have been quiet of late, things have been bubbling below the surface for one of their members, bassist Ewen Friers, who is currently working on a new project, titled CATALAN!

Taking some time out from the Axis Of life, Friers has had time to work on his sound, spend time re-grouping and working on this project, creating and forming sounds in France, putting pen to paper in North America and completing OKA, his first single, in London. This is a strong opening gambit from Friers – OKA has a spiky, melodic punch – with shimmering guitars, a scuzzy bassline and some brilliant post-punk percussion, similar to that of Les Savy Fav (an admitted influence). Similar to his work with Axis Of, this is packed with raucous, gang-vocal melody and wistful vocal couplets.

The video itself  is a strange one – from plugs failing to go into sockets, losing the end of the sellotape and the inevitable USB fail; roughly translated, it’s perhaps a reference to finding something and making a connection, no matter the simplicity of the action.

You can stream OKA by CATALAN! below:

Keep It Fast chatted to Ewen to find out a bit more about CATALAN!, Axis Of, the future and of course, cars from a 1992 courtroom comedy.

KIF: First question – how are you, keeping well?

KIF: Tell Keep It Fast a bit more about CATALAN! ; the concept and ideas behind it all.

EF: The day after Axis Of did our last show I took off and moved to France for a few months. We’d been full time for years, rehearsing, recording and touring non stop, we never switched off. I thought time off would be needed, but I brought my laptop and some recording gear just in case. Within a couple of days I was writing and recording again! I guess it’s built in to my personality. The big change in life must have inspired some creativity, that, along with my travels around Provence. Other adventures of 2016 around Europe, Scottish Islands hopping and a massive tour doing merch around North America further inspired CATALAN! And I just felt hungry to put out music. Tunes that really means something, even if it’s just for me. The lyrics are the focus, the project is built around the words, hence why it’s named after a language. I’m really interested in creating a unique lyrical landscape that might spark people’s imaginations.

KIF: Is an album or EP in the works?

EF: Firstly, I want to throw out a couple more singles, but the material for an EP, album or both is there, so I guess it will just be a matter of time.

KIF: Is this a project you hope to take on the road?

EF: Definitely. I miss the buzz of playing live, for me touring was always the best bit about being in a band, so I really want to take this on the road. I have rehearsed some of the songs with a few incredible musicians, so fingers crossed we get the right live outing to launch publicly.

KIF: Are you planning to collaborate with anyone in the future with CATALAN!?

EF: I hadn’t had any concrete plans to put together any collaborative stuff, do you folks have any suggested partnerships? Set it up and I’ll be there!

KIF: What’s happening in the Axis Of camp? Are you still in touch with Niall?  Also, did you know Niall’s name is spelled wrong on the back of the Mid Brae Inn (or at least my copy) – it says ‘Nail’

EF: Axis Of is dormant but not split. Niall is doing his thing travelling in Canada, we are in contact quite a bit. He has been very helpful with opinions and advice on CATALAN! and it’s no secret that he has been sending a load of exciting pieces of music that may turn into another Axis Of record down the line! We did notice the spelling error on the first run of The Mid Brae Inn and I completely assume it was an Apple auto-correct, but we just passed it off as a kind of biker hard ass nickname. Hammer and Nail sort of thing.

KIF: Non-musically, what do you do to relax and re-energise yourself?

EF: Between around April until October I try to get into the sea for a quick swim to clear my mind. I must say I also enjoy a bath, not many places left in world where you can just sit alone reading.

KIF: Have you ever dined on seeds? If so, what sort?

EF: Has to be sesame, as tahini!

Thanks Ewen, great stuff and a pleasure chatting!