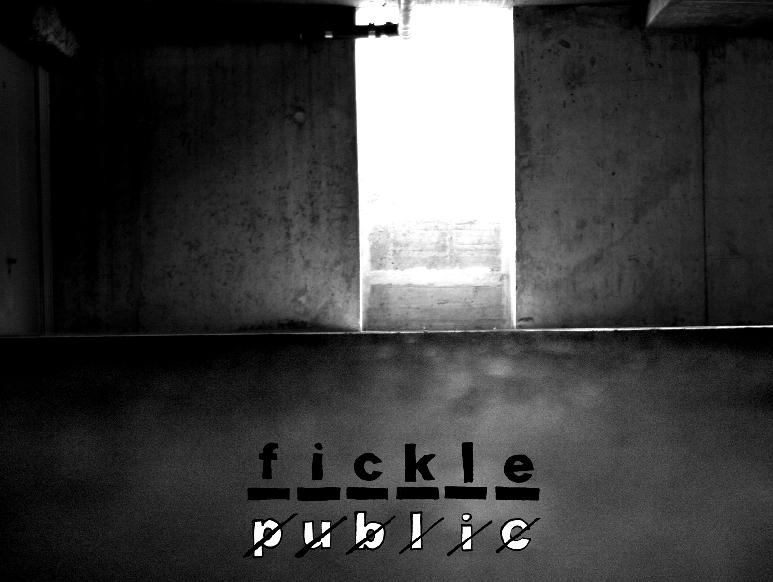 For those of you unfamiliar with whom Fickle Public are, hereâ€™s a potted biography. Originally named Purple Munkie, they went through a slight line-up shift and become this new entity. After several tour EP releases and demos they were signed to Irish/London independent label Smalltown America and released their debut album, â€˜Buckoâ€™ in March 2006. â€˜Buckoâ€™ was 10 tracks of scathing, tense rock music that shared many elements of Dischord-rage and their own brand of concise melody. They proceeded to tour the local toilet circuits and played the third Smalltown America Alldayer back in 2006. Strong rumours of the band working on a second album were banded about, but instead of actually doing this they decided to split up in May 2007. Well actually it was due to drummer Lewis quitting and forming Make Model instead (which he is now no-longer a part of and who are also now defunct since February 2009).

Got that? Good. Anyhow, â€˜Greatest Hitsâ€™ is a slightly bizarre title for what are essentially unreleased recordings that were to make the follow up album to â€˜Buckoâ€™. It appears though that theyâ€™re merely a couple of session tracks and three songs that were part of a planned split with the much missed Distophia (now Calories) that never came into fruition. The very fact that this is scheduled for a release however, will put to rest the agonising wait that three or four people who actually still cared about said â€˜lostâ€™ Fickle Public tracks, which have plagued internet message boards like the blue nun ghost from a year seven school trip.

The first track, â€˜Adam Hocingâ€™ stutters into existence and is instantly recognisable as a Fickle Public tune. For one thing, it has that dense, jagged bite to the guitars â€“ chewing away with aggravation and unrestrained spite. The slight distorted vocals cut through the jarring and tense sound with surprising ease, whilst the stop start nature of the pounding rhythm section carries the tune with irrepressible vigour. Strangely, this feels a lot more overwrought than almost all the tracks on â€˜Buckoâ€™ â€“ possibly due to the inter-band politics at the time and their inevitable demise. Vocalist Alan Ferguson, spits the songâ€™s title with gleeful delight through the enveloping haze of raucous post-punk snarl. Quite amusingly, this is easily the best track Fickle Public has ever recorded and itâ€™s taken five years to hear it. Whatâ€™s up with that?

â€˜Non Stop Hotâ€™ is less of the fury and agitation of the previous track. Speed is instead substituted for an almost progressive build, coupled with a rattling melody, yet retains that jagged bite. It also has, dare I say it, a â€˜funkâ€™ vibe about it, especially in the first minute â€“ although in a good way â€“ like itâ€™s skittering around the edge of funk, but reigning in just enough angular power to hold on to that Fugazi-sounding edge. Fickle Public have always had that noise-edge to them â€“ a constant strain of breaking between a shriek of feedback and a bone-shaking compactness to their unusual sound.

The aptly named â€˜Winningâ€™ feels like that anthemic, joyful rush of completion. Itâ€™s the essence of achievement â€“ of a powerful accomplishment. From the sloppy drum roll intro, to the rising guitar chords that get progressively louder and more distorted; to the crunching riffs, which strain the boundaries of being in and out of tune respectively. Props to vocalist Ferguson, who fights against the ever-rising noise, yet his strange screech, cuts nicely through the mix of wailing guitars.

â€˜Revel Revelâ€™ may or may not have a tenuous Billy Idol link, but thatâ€™s for Fickle Public to know and us to speculate. This is possibly the most angry and indignant track on this mini-album â€“ mainly to the rage in which the trackâ€™s title is screamed with just uninhibited spluttering fury. In many respects, itâ€™s like these five tracks just fell off the end of the â€˜Buckoâ€™ session. The scratching guitar lines, scrappy drum rolls; sung/screamed vocal yelps all tie in nicely with the more heavier side of the bandâ€™s debut and only proper release.
â€˜San Diego Hairâ€™ is a cover of a Distophia tune; albeit less of a scatter-bomb explosion of mangled notes and splattered beats; it retains a noble dignity of structure and poise; something which Fickle Public are more than capable of underneath their Dischord-arrogance and punk attitude.

Those who have been champing at the bit for these lost recordings; well the wait is over. Has it been worth the wait? Well, if youâ€™re still someone who spins their debut, â€˜Buckoâ€™ on a regular basis and rinses the hell out of the ‘Kittens Got Claws’ EP then you canâ€™t go wrong with this five track collection of raucous punk scrawl. A fitting send off to a band cut down before they had time to shine.

‘Greatest Hits‘ will be released on the 13th December via digital download from Smalltown America.