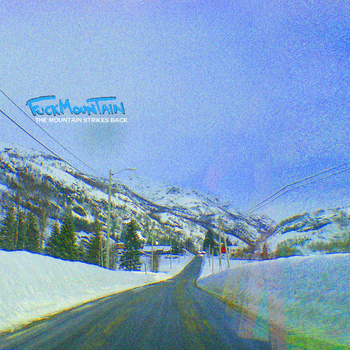 â€œI’m an ideas man, Michael. I think I proved that with Fuck Mountain.â€

Irelandâ€™s Fuck Mountain are a strange one. Two forces seem to be battling at work here. A bass guitar that sounds like itâ€™s full of wasps, bashing repeatedly into a door thatâ€™s trying to be kept shut by melody and tune. In other words, Fuck Mountain make one hell of a harmonious racket. â€˜Snow Dayâ€™ is like a grungier version of The Thermals; swapping their fast-paced punk rock for a laid-back, slovenly psychedelic howl. The raw and barren production values only add to the charm as it splutters along like an outtake from â€˜More Parts Per Millionâ€™ fed through a broken radio.

â€˜The Great Highwayâ€™ is just as scuzzy, if not more so â€“ cutting a scrappy, rabid path of scrawling, snotty desperation. The vocals are buried in the mix, but it somehow works to great effect. It goes all glorious batshit at the end, as guitar and bass spiral into each other for a big rock ending of caterwauling drum crescendos and noisy feedback. â€˜No Shameâ€™ sounds like it should be soundtracking the actions of an obnoxious youth, strutting down the street with a fucking massive ghetto blaster resting on his shoulder. Itâ€™s a loud, blaring, disgruntled scribble of fuzzed-out indie-rock, that wouldnâ€™t look out of place on the Mallrats soundtrack.

â€˜The Mountain Strikes Backâ€™ is available on tape (note this is what a tape looks like) for the quality price of â‚¬4. Get on it for some joyful, good time rock â€˜n roll distortion. Ok, letâ€™s get heavy. Pray For Teeth are that kind of brutally honest and despondent hardcore that jerks and convulse with a frustrated, gnawing rawness. It reminds me of Rainydayfuckparade – the drawn out, relentlessly crushing riffs that spread out like blood leaking from a rather nasty chest wound.

â€˜Heavy Restlessâ€™ is a punishing and barbaric onslaught of gutsy and determined rage. It feels so dense and utterly furious, especially the opening 30 seconds, which consist of an almighty bellowing scream, followed by some discordant guitars and token pummelling drumbeat.

The tortured squeals emanating from the guitars is like a second voice cutting in, whilst a noisy, leaden groove slips into gear and Pray For Teeth cut an ugly twisted, doom-laden hole of hardcore. Despite only being two songs; â€˜Iâ€™m Still Finding Feathers In My Hairâ€™ is an intense 7 or so minutes of sound. â€˜Paper Courageâ€™ has slight Cult of Luna tendencies that draws out what is quite an eloquent guitar tone above all the seething guttural bass and hard-hitting drumbeats.

If youâ€™re after some crushing, throat-burning noise, then Pray For Teeth are just the ticket. At the other end of the hardcore spectrum, Cerce channel their emotion and rage in a different direction compared to Pray For Teeth. Instead of crushing the listener beneath wave after wave of punishing despondence, Cerce push you out of the plane and then chuck the parachute after you as an afterthought. This is weird; like really weird.

Opening track â€˜Mareâ€™ is just under 2 minutes of tantalizing intro â€“ the guitars hold a harsh wailing chord, whilst various drum rolls clatter and crash until it suddenly explodes into the first â€˜properâ€™ track, â€˜Weary.â€™ Skate-trash that bulldozes forward, content to channel riff after riff (plus that wailing guitar from â€˜Mareâ€™ still present) whilst the rapid-fire vocals, chew and bite with determination and malevolent gusto.

â€œLET ME PUT THIS BODY TO REST!â€ is roared with such passion and wicked glee, itâ€™s hard not to smile. â€˜Choicesâ€™ is two minutes of strutting, seething punk rock that sounds like Be Your Own Pet crossed with TouchÃ© AmorÃ© â€“ not sure whatâ€™s up with the SunnO))) style outro, seriously, what the fuck?

I imagine Cerce are best experienced live and itâ€™s probably a chaotic, abrasive experience that will stay with a person. The six tracks on this self-titled effort is proof of this â€“ every song seems to contain an appropriate level of insanity. â€˜Concussionâ€™ is about 2 minutes of uncomfortable guitar wailing, sludgy drum beats and the cries of â€œGIVE ME A BETTER DRUG! DRUG ME!â€ whilst â€˜Libelâ€™ is under a minute of Cop Problem-esque breathless, splattered hardcore.

Last track â€˜Fornicationâ€™ sounds like Made Out Of Babies gone wrong â€“ I swear one of the guitars is being bashed repeatedly against an amp whilst everything else spirals into a cataclysm of uncomfortable, but manic noise.

Barmy, but brilliant â€“ Cerce are on tour with Pray For Teeth so you should get down there and start the descent into anarchy.