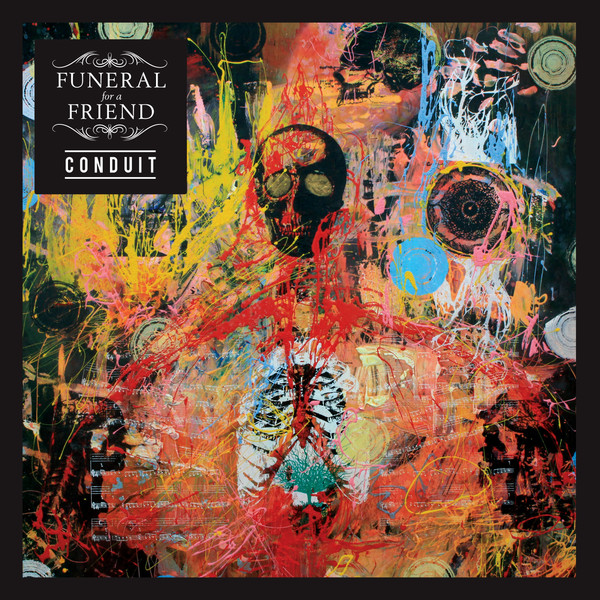 I haven’t heard a Funeral For A Friend album since ‘Hours‘. Back in 2003, FFAF were my favourite band – ‘Casually Dressed and Deep In Conversation‘ for all it’s massively pretentious title aside, was an absolute blast of passionate, emotional-hardcore. To be fair to them, they really didn’t do wrong with the previously mentioned ‘Hours‘ either; an album that toned down on as-then drummer Ryan Richards’ screaming and focused more on making everything a lot more melodic, but still retaining the zeal and eagerness of their debut.

After that I lost interest. Not the band’s fault; I’d just moved on, new bands, new music – FFAF become that band I looked back fondly on whenever I heard ‘Escape Artists Never Die’ in some dingy, sweat-soaked rock club. Why the interest now? Well, it actually stemmed from Rock Sound again, whose 9/10 review of ‘Conduit‘ piqued my interest. Also, after watching the music video for ‘The Distance‘ I was intrigued by their developed sound.

Now with a modified line-up (only vocalist Matthew Davies-Kreye and guitarist Kris Coombs-Roberts remain from the Casually Dressed-era) â€˜Conduitâ€™ is Funeral For A Friendâ€™s 6th album and also their shortest. Clocking in at just over 29 minutes, with the longest track being 3.37 (the superb â€˜High Castlesâ€™) it doesnâ€™t hang around. Thereâ€™s no respite; heck, only â€˜Nailsâ€™ slows things down for about 10 seconds. This is Funeral For A Friend embracing the sounds of their current and fallen contemporaries, giving them a fresh and invigorated start.

â€˜Sunlessâ€™ for instance, wouldnâ€™t look out of place on a Boy Sets Fire album â€“ in fact, you could be fooled into thinking it was a cover of a BSF track. The guitars jerk and lurch with that wrought post-hardcore edge, whilst Davies-Kreyeâ€™s vocals are spat with an impassioned vigor. â€˜Greyâ€™ bulldozes past with a spluttered, deranged heaviness last heard on a Snapcase album â€“ with backing vocal cries provided possibly by Coombs-Roberts, show that while Ryan Richardsâ€™s screams are missed, they havenâ€™t been completely forgotten. The guitars are suitably twisted and broken-sounding, contorting and bending, misshapen riffs through the hardcore spectrum with efficiency and power.

Opening track â€˜Spineâ€™ is a tense and direct slap of wrought post-hardcore, guitars lurching and spilling grimy riff after riff. The title track bulldozes just over 2 minutes of intense, sharp-edged punk rock, supported by a gruff hardcore edge. The breakdowns are spot on, as are Davies-Kreyeâ€™s vocals â€“ substituting melody for a fervent shouting and gritty battle cries.

â€˜The Distanceâ€™ is one of the finest tracks theyâ€™ve ever recorded. Two and a half minutes of perfectly paced, rambunctious pop-punk. It ticks all the right boxes, from the anthemic chorus, which is a soaring, indignant blast of pent-up joy, to new drummer Pat Lundyâ€™s brilliant drum lines. â€˜Best Friends and Hospital Bedsâ€™ is yet another pogo-friendly anthem; mixing emotive-power-pop with hardcore, plus some fantastic drum rolls, gang-vocal chants and yet another huge hook-laden chorus. Four Year Strong should take notes; this is the good shit right here.

â€œI refuse to be apart of this disease and I refuse to play that partâ€ bellows Davies-Kreye on â€˜Travelledâ€™; a bitter 2 minute romp of roaring, contorted hardcore, that seamlessly merges into another pop-rock chorus, before morphing into that rasping bark of disgruntled riff-laden animosity.

Like â€˜The Distanceâ€™, closing track â€˜High Castlesâ€™ is contender for one of their strongest songs to date. The opening 30 seconds are a glorious blast of Set Your Goals-esque pop-hardcore, executed beautifully, coupled with a yet another captivating and melodic chorus, which is something the band have perfected with style and grace. The gang-vocal chants near the end, along with Davies-Kreyeâ€™s guttural roar and scream of â€œWORDS ARE WEAPONS! FIST BY FUCKING FISTâ€ is the determined bellow of a band who are still breathing the raw fire that emblazoned them from their inception 12 years ago.

The sharp and jagged directness of â€˜Conduitâ€™ highlights just how much influence bands like Snapcase have obviously had on Funeral For A Friendâ€™s writing. Their taunt, abrasive edge, coupled with Davies-Kreyeâ€™s consistent and zealous vocal shouts showcases just how far the band have come and how they can still punch a serious dent in the hardcore music scene.

Funeral For A Friend
Distiller Records