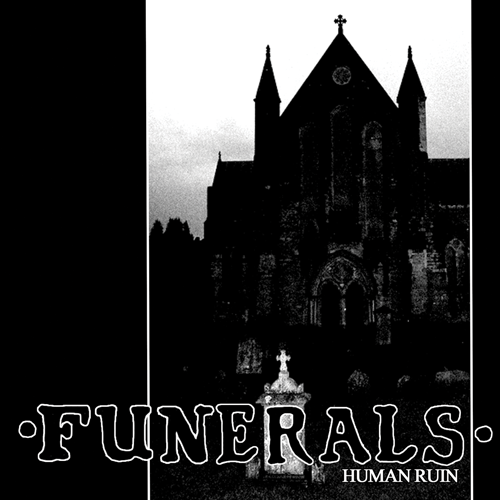 As we enter Autumn, darkness begins to descend. Thank god, because it’s been too nice recently. One band seems to be thinking a similar mindset – Oregan’s Funerals, who aren’t a happy bunch. The name alone gives you an idea of their musical inkling. Somewhere around the great swirling whirlpool and the crashing waves where detuned, caustic hardcore meets and doom metal, Funerals have dredged up a sound that mixes both these styles together, in a volatile, frothing beaker of rage and meaty riffage.

First track, Veins of Black dredges atmospheric scrapes of strung-out guitar chords, that make way for the slovenly bass rumble and low-end militant drum beats. This goes on for a full minute, building on layers of rough, bruised riffs, before vocalist Craig lets rip with a snarled, embittered roar. Everything suddenly shifts into gear; a gruff and weighty metallic assault and thick, meaty slaps of crunching guitars. Such is this pounding assault, you won’t realise as it melds seamlessly into the second track, Human Ruin. Here, the guitars take a scything, almost Dillinger Escape Plan-esque shriek of staccato disturbance.

Blackened, crust-punk hardcore fed through the grinder – Funerals are tapping into a new level of darkness…

When vocalist Craig isn’t dragging his inner demons to the front, his voice has an odd, detached tone, like he’s just seen true horror and can’t comprehend what he’s just witnessed. “Father of sin…guide my hand…” he intones on Human Ruin’s more quieter moments, before letting rip with his throat-ravaging bark. The raucous, detuned-hardcore assault on the track’s coda is superbly caustic. Grooves are a-plenty of the twisted ramshackle that is Sick of Sun; which is a potent sludge-metal barrage of contorted, harrowing hate. The last 2 minutes in particular are fairly unsettling – an everlasting drone-metal assault of gnarled chords, whilst inhuman screams punctuate through the eerie, desolate hum.

Blackened, crust-punk hardcore fed through the grinder – Funerals are tapping into a new level of darkness. Interestingly, Human Ruin was originally self-released last Halloween, (on cassette!) but since signing to ‘the spiker the logo, the more metal’ record label, Blasphemour and can now be pre-ordered on vinyl, fancy.