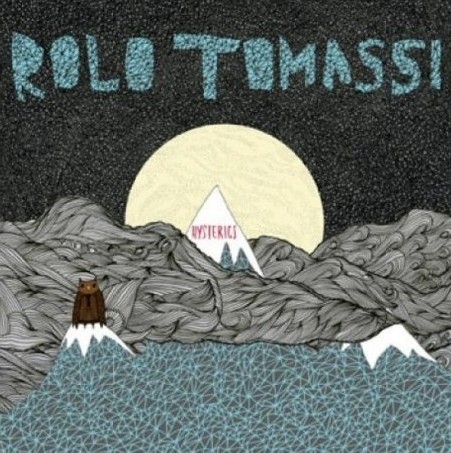 Here we have a band that splices together two things that I love in the world of music:

Two such entities shouldnâ€™t really work, but as we know from Justin Pearsonâ€™s mob of insect-loving freaks (The Locust) and the teeth-obsessed, fat-kid heckling jerks (Holy Molar), they go together like chalk and cheese, Abbott and Costello, Phats and Small, my fist and your face (Iâ€™ll stop now).
One thing that should be made clear: this isnâ€™t an easy ride by any stretch of the imagination. The progression from the EP (well, they were hardly going to move backwards were they?) is instantly apparent. Rolo Tomassi seem to have more room for experimenting; more room for completely wrecking the notion of coherent structure and more room to basically scare the shit out of the listener.

Immediately youâ€™re thrown a curveball. The softly, softly approach of opener ‘Oh, Hello Ghostâ€™ sounds like someone re-tuning a radio in a 60â€™s b-movie. Then, through the delicate feedback, the quiet, angelic tone of Eva Spenceâ€™s vocals fills the sombre atmosphere, backed by a steady drumbeat and her brotherâ€™s, staggered-sounding drawl. As the guitars and bass kick in, the baroque tones of the synth flood through, elevating the tracks already haunting nature. Youâ€™re fooled, but only for a second; as those innocent female vocals suddenly metamorphose into something thatâ€™s a cross between J.R. Hayes, and the fucked up death-rattle girl from the Grudge under a barrage of pulverising heavy rock.
To put it into perspective, imagine the first time you heard ‘Burn, Piano Island, Burn!â€™ by Seattleâ€™s The Blood Brothers. Now, donâ€™t tell me as soon as those ‘has he been castratedâ€™ vocals hit you and that distorted scribble of those feedback-drenched guitars that you listened to the whole fucking thing, because youâ€™re a lying bastard. That record was a slog to get through, but it was worth it. This is similar in many respects. ‘Hystericsâ€™ has so much going on inside, itâ€™s difficult to pin down exactly what theyâ€™re doing. Possibly trying to recreate a perfect copy of any of these tracks is about as easy as stapling jelly to a roadrunner.

The winding, contorted nature of the aptly titled ‘I Love Turbulenceâ€™ mixes together slovenly, crunching bouts of off-kilter metal with the ethereal and ghostly whispers of Eva in such a remarkable way, that when the screaming starts, you donâ€™t really take it in at first, at it comes as quite a shock. Predominantly, itâ€™s the erratic and vaguely sinister keyboard that throws the listener off track. Here we have the manifestation of light-grind metal, with a shed full of deranged effects, glitches and bleeps sprinkled liberally over the top.

‘Fofteenâ€™ makes no bones about being as subtle as an anvil to the happy sacks; twisting and gyrating like a pole dancer with ADD, whoâ€™s suddenly decided that shrieking like an uncontrollable banshee is the most lucrative way to drag in the punters. To say the track lurches would be an understatement. It positively staggers under the weight of Dillinger Escape Plan-jazz breaks, Converge-style guitar stabs and twin-vocal snarls that bring to mind an early Johnny Whitney and Co. ‘Abraxasâ€™ follows a similar pattern, sounding like some thoughtlessly-but-brilliantly conceived experimental jazz number thatâ€™s suddenly decided to play a 5 times their normal speed. ‘An Apology to the Universeâ€™ gives the listener time to catch their breath in the form of a 73 second course of ambient fuzz, before exploding into ‘Nineâ€™ with such barbed ferocity, you feel as though a pack of lions have burst from your speakers, ready to gorge on your panic-stricken body. The only real gripe is that when vocalist Eva is screaming blue murder; her lungs positively shredding like being force-fed a diet of sandpaper and broken glass, itâ€™s a real struggle to make out what sheâ€™s singing about, or whether sheâ€™s simply spouting nonsensical metaphors.

‘Macabre Charadeâ€™ takes the familiar path of gentle spoken word segment trade off between Eva and her brother James, before launching into yet another bout of scathing vitriol. In all honesty, it seems a bit of a mess; random notes jammed in everywhere, out-of-time drumming, it sounds like theyâ€™re having the time of their lives. See ‘Trojan Measuresâ€™ for another example, which acts as an extension of the irregular and sketchy pattern of madness that ‘Macabre Charadeâ€™ ended at. Filler track ‘Everything Went Greyâ€™ couldnâ€™t be more aptly named, sounding like a TV set thatâ€™s been tuned to the white noise station and then dropped several times â€â€œ on a concrete floor.
Penultimate track ‘Scabsâ€™ adds even more poison to the already seething nature of the Tomassi snake, before cutting off short in time for the 14 minute finale of ‘Fantasia.â€™ This is supposedly their ‘Deathfaceâ€™ and in some respects it doesnâ€™t disappoint; even the slow, sluggish build up changes just at the right time (as does Evaâ€™s vocals) for something more subdued, before launching into another tirade of spazzcore fits and jerks. The remainder of the track is made up of swirling keyboard tones and a lethargic drumbeat and yet another barrage of prog-guitar meandering to terminate what has been a challenging ride.

Additional: Rolo Tomassi’s ‘Hysterics’ is a superb debut album, expertly showcasing how their sound bounces between the realms of tightness and complete chaos. This is one act that is constantly experimenting and consistently delivering excellent results. Strongly recommended to fans of The Locust, Cutting Pink With Knives, Trencher and the tortured screams of the damned.