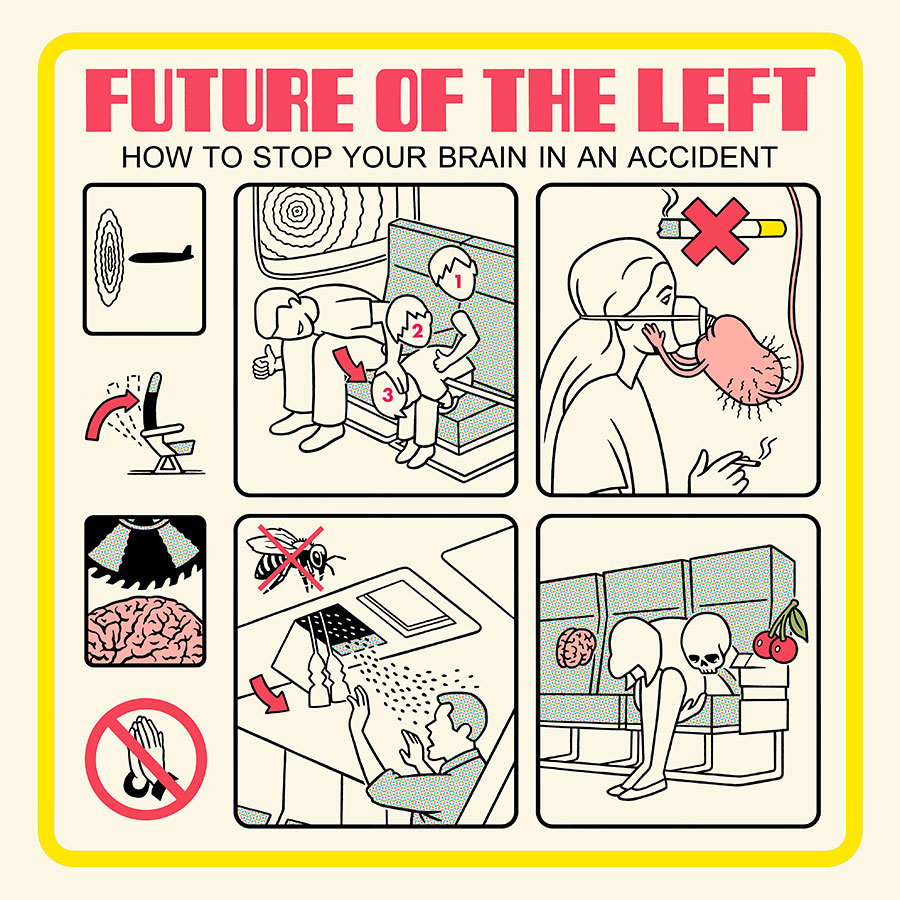 Band – Future of the Left
Album – How ToÂ  Stop Your Brain In An Accident
Label – Prescriptions
Release dateÂ  – Out now
Sounds like – Fastening your seatbelt. Closing your eyes and remembering an idyllic childhood afternoon spent in the shadow of a nuclear power station.

“The loneliness took my ancestors…that and the lions.”

In Krent Able, Future of the Left have found an artist who best exemplifies their musical outpourings down to a tea. His art is absurd, disturbing, laced with the blackest of black humour and it looks absolutely stunning. The inside sleeve to How To Stop Your Brain In An Accident shows the tail-end of an plane disintegrating – poor hapless souls being ejected into the air, a baby flying into a detached engine whilst those still confined to the comfort of their seats can only sit and watch as the horror unfolds. Future of the Left revel in the horror of making you uncomfortable and this, their 4th album builds on that, with the constant flashing of a giant “fasten your seatbelt” sign that has started to breathe fire and melt.

From songs about hermaphrodites, jamming camera tripods into eyes, Roy’s massive fucking head and record companies, Future of the Left dissect an array of topics in their own brand of sardonic joy and hatred. Keyboards for the most part are sparsely used; instead Future of the Left opt for more bass and it shines through with the kind of sludge-drenched punishment you’d expect. Opener Bread, Cheese, Bow and Arrow is a stop-start romp (think adeadenemyalwayssmellsgood) of low-end noise-rock carnage. Falco’s vocals are absolutely spot on – ranging from yelping barks, to a menacing croon, to his trademark frustrated growl and even the odd braying laugh. The line “I’m just a man….a simple thing” is particularly acidic, in all it’s teeth-clenching frustration.

The cell-swamping infection of the oddly-joyous Johnny Borrell Afterlife is utterly charming and daft – think a choppy uptempo beat, clean melodies, chants about Roy having the biggest head in school and the location of a hovercraft. This is offset by the stark, bludgeoning fury of the depressing Future Child Embarrassment Matrix, which is utterly vicious and soaked in loathing. “HER SKIN IS SO THICK, SHE NEVER FEELS A THING...” is roared over the dirty, crust-punk bass and the coda is beyond bleak, with the metallic throaty-gargle “HER COCK IS SO HARD.”

From songs about hermaphrodites, jamming camera tripods into eyes, Roy’s massive fucking head and record companies, Future of the Left dissect an array of topics in their own brand of sardonic joy and hatred..

Transported back 60 years to the time of public service broadcasts is the name of the game on Singing Of The Bonesaws, which has Falco adopting the persona of a sardonic newsreader, stating matter-of-factually, how fucking terrible everything is. His clipped, faux-posh accent bleeds from a crackling transistor over rusty, menacing bass as one continuous stream of dark, Charlie Brooker-esque prose that’s utterly deranged. Bears wearing Michael Winner’s face? Shouting inanities in regional accents? Wasting the precious gift of life? It’s all here in black and white, covered in blood and has the same air of hopelessness and brilliance that I last heard onÂ Shellac‘s End of Radio.

French Lessons is a nice diversion from the aggression, yet is still laced with an undercurrent of snark. The opening line “they say the price of love is a blackhole...” is particularly grim as is “as I run to the disabled bathroom, topping off a 12 hour drinking spree…” but yet it’s all delivered in a gentle, almost mumbled croon beneath some sparse, crisp instrumentation and the closest they have to a possible (if slightly warped) ballad. But this is Future of the Left we’re talking about, so the line “I’m reading you like a pamphlet that I picked up from an idiot” brings you back down to earth.

The snapping Eighties Matchbox B-Line Disaster trash-punk of Donny of the Decks is a sneering middle finger at worn-out, past-it DJs, with the uncomfortable chorus bark of “the stink of sex is undeniable”Â  ringing in your ears, whilst the creeping off-kilter peril of Something Happened is an utterly barmy curveball. Delicate piano, sinister repetitive bass tones and Falco’s disembodied, emotionless voice chanting that “things are awkward…things are disappearing…” before bursting into a flourish of cheers and handclaps. It immediately reverts back to the desolate piano stabs and sense of dread. “Boy meets girl, ignores girl, kills girl in tragic accident…” states Falco at the end, like he’s reading out the plot to the latest teen slasher with morbid satisfaction. The partner in weirdness to 2012’s A Guide To Men from Plot if there ever was one.

Things To Say To Friendly Policemen is a nod to Mclusky – a brash, riff-driven slab of agitated punk rock fed through a mincer. Handclaps are a plenty, as is the irrepressible growl of snarling disgust and a parping kazoo chorus that Gay For Johnny Depp fans will go wild for. The real treat though is the desolate creep of Why Aren’t I Going To Hell?. Falco’s breathless, whispered, teeth-grinding snarl is part whisky-soaked American-west, mixed with Tom Waits. The synthesiser is deliciously creepy and hollow-sounding as are the lyrics, especially the shuddering gasp of “extension cord wrapped around the base of my penis in defiance of societal norms…” it’s utterly captivating and the rousing bar-room smackdown and chant of “SUCH A LONG WAY DOWN!” rounds off a deeply disturbing and fantastic collection of fanatical terror disguised as music.

How To Stop Your Brain In An Accident is Future of the Left at their finest – the amount of invention, creative wizardry and imaginative song-writing poured into this is sublime. From the jarring noise-rock dementia, to spitting punk, to bonkers tales of awkwardness, trips to the garden centre and grinning in the darkness, this is utterly and brutally essential. May I be sucked into the path of a jet engine if this doesn’t end up in or even at the top of every ‘albums of the year’ list.

“ROY JUST A BOY, JUST A BOY WITH THE BIGGGGGGEST HEAD IN SCHOOL.”

Future of the Left
Prescriptions Music