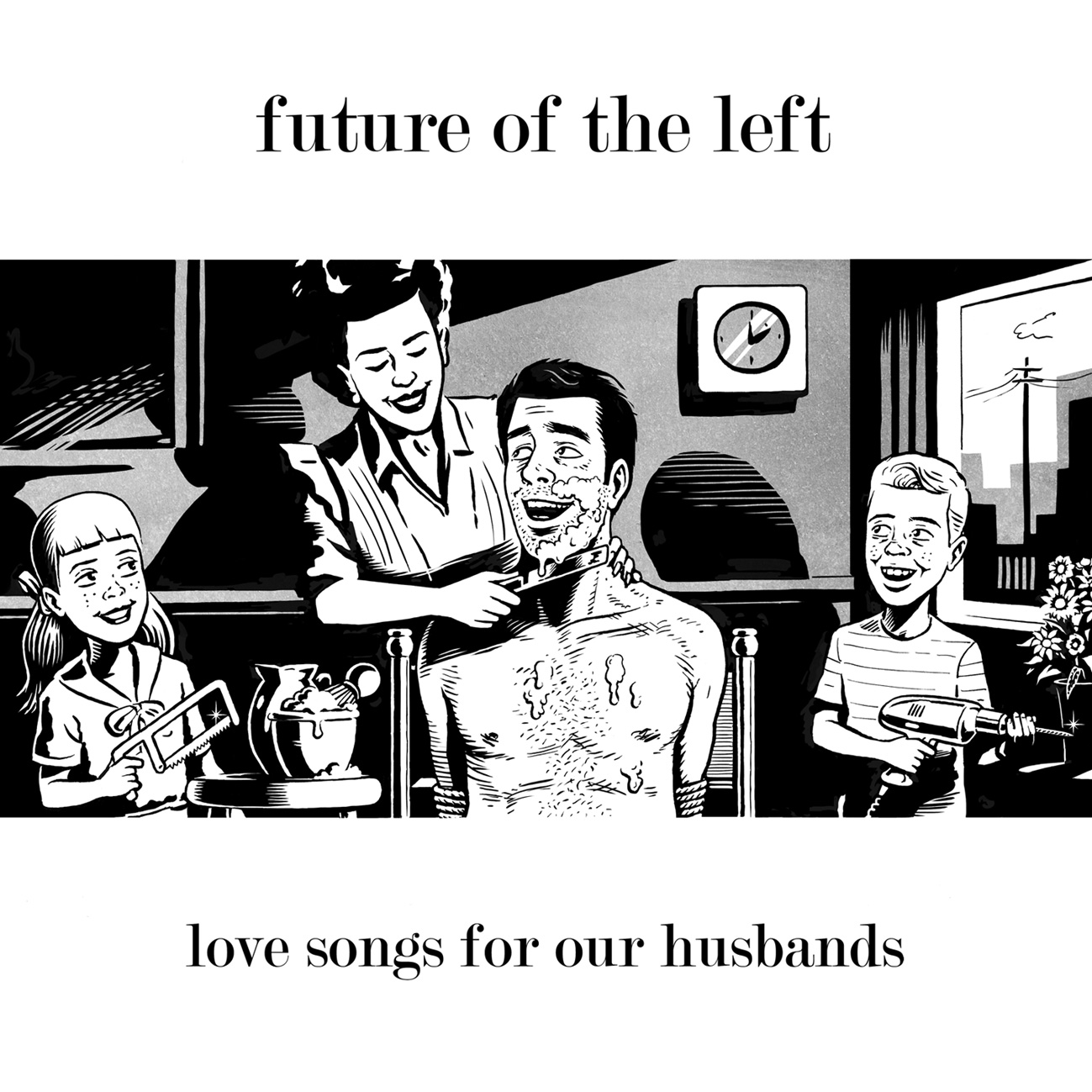 Band – Future of the Left
EP – Love Songs For Our Husbands
Label – Prescriptions
Release date – Out now (for pledgers and through Prescriptions records)
Sounds like – a career-defining pre-gap to shaving a cat.

When I found out that Future of the Left had jumped on the Pledge Music bandwagon my first instinct was to find out what it was and how I could go about giving them my money right away. Yes, they need(ed) your hard-earned cash to fund their next (4th) album to hopefully inject a new batch of misanthropic, satire-drenched, dissonant rock into our ear canals. Having achieved their desired total (actually, they’ve reached 238% of the goal – AT TIME OF WRITING) they have released a title for this upcoming 4th record, How To Stop Your Brain In An Accident) which is due in October.

So yes, that’s the just of it…so what the fuck is Love Songs For Our Husbands about then? Basically, an EP to tide over fans before the real deal is released. Yes, these are songs that may or may not make it on to the new album – it’s really that vague and unpredictable, but mind you, it wouldn’t be Future of the Left would it? As someone who found The Plot Against Common Sense their best work since plastic forks, I was eager to hear this new offering (yes, I am aware of the Man Vs Melody EP, which is also a barnstormer).

Falco’s vocals switch from an eerie, feedback-smothered monotone that is shit-the-bed creepy, to inhumanly garbed screams..

“Forcing myself through a telescope lens into a sea of bad moods…” states Falco, nonchalantly on The Male Gaze, already setting the rather sardonic and pithy tone under a fuzzy haze of Pixies-style slacker rock ‘n roll. Think Fuck The Countryside Alliance from their first album Curses!, laced with the strut and displeasure of No Age, yet strangely for FOTL, there’s some melody breaking through the oddball, uneven structure and it’s refreshing and oddly touching.

Gnarled, twisted, filth-encrusted bass is put through its paces on The Bisexuality of Distance, a track that contains similar fire to the crunching rush of I Am The Least of Your Problems from their most recent full length. Falco’s vocals switch from an eerie, feedback-smothered monotone that is shit-the-bed creepy, to inhumanly garbed screams that are enveloped by a thunderstorm of sludge-rock power-chords. The dense, crunching layers of distorted guitar and pummelling drumbeats only add to the caustic and unhinged, scrawling noise-rock. An absolute live favourite in the making.

An Idiot’s Guide To Ireland is a bemusing ditty – full of jaunty, sea-shanty drum rolls that bounce with mischievous glee, whilst Falco talks of sending memories off to walk the plank and comparing Dublin to Warsaw, whilst backed by gritty riffs and a rushing, noisy cacophony of squealing bass and cymbal crashes.

Love Songs For Our Husbands is a most delicious entrÃ©e – biting, humorous and rough-shod, it displays what a powerful unit Future of the Left have become and long may it continue – roll on October!