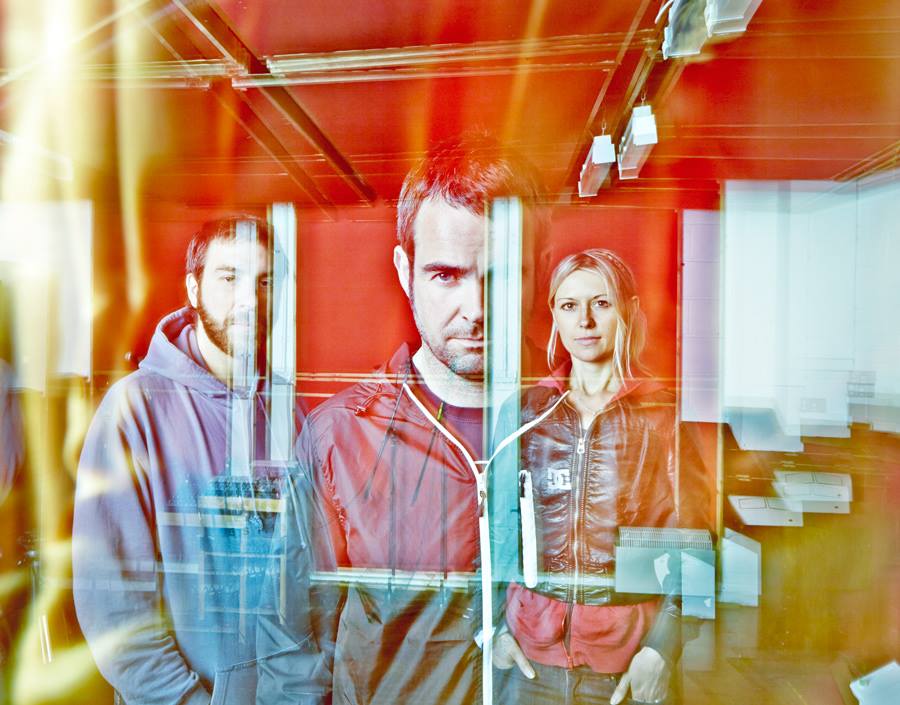 The time for amusing surrealist lyrics, skull-drilling bass-lines, deep-levels of snarking and seething bile is upon us. Slimmed down to a three piece again (guitarist and professional maniac Jimmy Watkins is strangely absent from this recording, and indeed, the band) Future of the Left are on to album five and their second through Pledge Music. Having reached the allotted pledge total in a mere three hours, it shows just how rabid/adamant/willing to chuck their hard-earned cash at anything Future of the Left fans really are, and I should know, being one of those absolute bastards.

Like a lot of Future of the Left releases, there’s a perverse creep to The Peace and Truce… but unlike the others, this feels even more cynical – even more biting, raw, unhinged, skin-clawing, rasping and of course, bloody hilarious to boot. Opening track, If AT&T Drank Tea What Would BP Do? is just as paint-gargling as the title suggests. The scraping whine of the guitar, Jack Egglestone’s keg-roll drumming and Julia Ruzicka’s thundering bass licks – it doesn’t so much as flow from the speakers as lurch wildly, flailing electrical crackles of vibrant, destructive energy, whilst vocalist Falco lets rip with his staccato snap of derision and reassures Danny that “the gammon the bed was fine…” as it eerily feels like we’re slipping into Girl Band territory with all this talk of food. The screams of “LOCK! JAW!” round off a particularly disturbing introduction and it continues down the weird rabbit hole, which soon becomes perfectly natural.

The backing vocal chant on In A Former Life (courtesy of Jack?) is oddly macabre and hilarious at the same time, whilst we’re treated to a list of the many things the unnamed protagonist was reincarnated as (Ron Perlman’s gas tank being a particular favourite), the tune is carried on a minimal bass and guitar line and statements about how “crop rotation does not really work” and “in a former life, everybody was farmer.”

“A dead body in a boot of a Nova is the least of my problems, as long as there is still room for the shopping…” states Falco on the bonkers front-end bass loaded drone of Running All Over The Wicket. Extremely good luck to anyone who manages to shift Julia’s eerie, looping bass-line from their heads; it crunches, rumbles and gargles along, whilst Jack’s off-kilter drum patterns (making it one of the most FOTL songs you’ll ever hear) coupled with Falco’s direct and withering snarls “if any amateurs want to enter, they should write in…” baiting and mocking anyone who dares challenge them. The accusing sneer at the beginning of The Limits of Battleships asks the listener “have you ever been part of a criminal conspiracy?” Before reiterating that it’s actually a worthwhile and joyful investment of time. As is this track, a grumbling, blast of stop-start, agitated robot-rock distaste. Falco’s voice switches between that of a screech owl, barely able to spit the bilious words from his beak, before switching to a mischievous and interrogating whisper, especially the way he delivers the words “but there’s no girls on the team!” Superb in every single way.

The marching drum ‘n bass stomp of Back When I Was Brilliant, coupled with the cutting customer service-style mid-section (“I can verify that your purchase is important to us“) and the promise of curry house recommendations (with in a 25km radius) all add to the warped and unnerving tone and vibe that makes up The Peace and Truce of Future of the Left. “I am, most of the time perfectly happy, but occasionally struck by melancholy” narrates Falco on Eating For None; which mutates from a pleasing ditty, into a scathing scuzz-rock bite of pure hate. “Add another finger to your English breakfast, you army surplus motherfucker” is repeated over an over, building in incandescent rage and loathing, as the disjointed crunch of Julia’s hamnmer-like bass and Jack’s bonkers drums rain down.

Extremely good luck to anyone who manages to shift Julia’s eerie, looping bass-line from their heads; it crunches, rumbles and gargles along…

The bobbing, ramshackle bounce of 50 Days Before The Hun is oddly funky in some respects and fairly sinister in others. What sounds like a kazoo again (Things To Say To Friendly Policemen anyone?) adds a weird, buzzing backing track. The gleeful handclaps and Addams-family-esque guitar drone gives this an overall accidental-Halloween-vibe, coupled with distorted vocal yelps, it shares similarities with the equally bizarre but brilliant A Guide To Men from their 3rd album.

Speaking of amusing and brilliant; “how many great achievements did it take to make you so smug?” is asked on the scene-baiting Proper Music, a drum-lead clatter of throbbing, almost stoner-rock nuance. Final track, the dark-melodic hum of No Son Will Ease Their Solitude rounds off the sense of uncertainty and malaise – the tale of a pony trek gone wrong, too many drinks, surrender and possible failing. “Did you want to be in the military all along?” Whispers Falco, his usual snark tone replaced with that of something veering towards compassion, only to be replaced with the surly chant of “surrender in a minute, har har har….“, which gets more and more disturbing at each repetition.

Closing statements? The Peace and Truce of Future of the Left harks back to Curses! and Travels With Myself And Another in it’s stark and caustic tone, as well as lyrically, being one of the most amusing albums of their career; seriously, It’s taking all my strength not to copy out all the words to Running All Over The Wicket. Also, that album cover. THAT ALBUM COVER. Bleak? You bet. If there was any peace, it’s well and truly been locked in that gas tank belonging to everyone’s favourite Stella Artois actor.