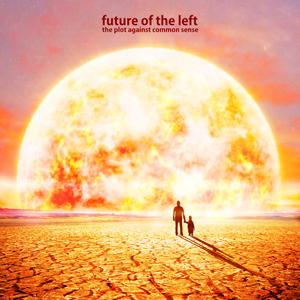 Band – Future of the Left
Album – The Plot Against Common Sense
Label – Xtra Mile
Release date – Out now
Sounds like – A penguin staring at a ball of consuming fire.

*Breathes out.* Like Krusty watching ‘Worker and Parasite’ for the first time; “what the hell was that?” indeed.

Much like â€˜Tough Loveâ€™ from Leeds mentalists, Pulled Apart By Horses, â€˜The Plot Against Common Senseâ€™ seems to take a darker tone than Future Of The Leftâ€™s previous effort,Â  ‘Travels With Myself And Anotherâ€™ (ok, stop with the long titles please).

It however, still has that snide humour, that crafty, malevolent grin of a cackling Batman villain but itâ€™s always developing, evolving becoming something more than they were when they first hit the scene with â€˜Cursesâ€™ back in 2007. Also, Kelson leaving in 2010 and Julia from The Million Deads and some dude called Jimmy (described as a FUCKING MANIAC by Falco â€“ all caps for emphasis) joining probably helps Future Of The Left MK.2 burst forth like a several hundred hydra heads (new band name) spewing from a load of tattered neck stumps.

â€˜Sheena is a t-shirt Salemanâ€™ is as previously described here: just over two minutes of frustration and gnashing energy. The gloriously fuzzed out bass guitar, touches on almost noise rock, whilst Jimmy Watkinsâ€™s backing vocals areâ€¦wellâ€¦maniacal. He sounds like heâ€™s just escaped an institution where the jackets are pretty white with long sleeves.

To these ears, â€˜Beneath the waves an Oceanâ€™ is perhaps one of the best tracks Future of the Left has ever written. The slow-burning opening bass rumble, (which continues to growl and seethe its way through to the songâ€™s coda), not to mention Falcoâ€™s delivery of every single word, which is done with such acidic distaste â€“ such menace, such abject hatred. â€œNo way, youâ€™ll ever find peace, youâ€™ll ever find peace with the name they gave youâ€¦.â€ â€“ it shows just how much emphasis his voice lends that he makes a word that is a synonym for tranquility sound like vicious braying laughter.

At the other end of the spectrum, sits the sinister mantra that is â€˜City of Exploded Childrenâ€™ and the harrowing â€˜A Guide to Menâ€™. â€˜Cityâ€¦.â€™ recycles the opening bass guitar line from â€˜Fuck The Countryside Allianceâ€™ and manages to make the words “run to Dixons” sound so deliciously evil. It kind of walks this line of being deliberately uncomfortable sounding, and oddly hopeful (although I doubt â€œeverything IS fineâ€). The marching-band chant on the last minute is so surreal and desolate sounding (lyrically â€“ â€œthe smell of smoke with collect in our bonesâ€) but as previously stated, the beat feels reassuring.

â€˜A Guide to Menâ€™ is harrowingly creepy. Built predominantly around an eerie, Tron-esque keyboard wail, a desolate bass strum; the vocalsâ€¦oh god the vocals. Falco sounds like a prophet barking insane mantras from a bronze pulpit. Only he could make the synthesized bark of â€œHOLY EMPEROR PENGUINSâ€ sound truly chilling, but fucking brilliant â€“ and for some reason dreams up pictures of the League of Gentlemen being their most sadistic.

Throughout â€˜The Plot Against Common Senseâ€™, Future of the Left are curve-balling like crazy with their acerbic wit the only thing remaining a constant staple (also the bass, all glory to that gutter-scrapping bass guitar!) â€˜Goals in Slow Motionâ€™ is a cap doff towards Husker Du, sans all the low-fi fuzz, but still retains a scuzzy, post-punk edge. It feels decidedly summery, something I never thought Iâ€™d write about Future of the Left, despite the sordid lyrical content (Hull is mentioned. HULL).

â€˜Sorry Dad I Was Late For The Riotsâ€™ sounds like something you would hear on Yo Gabba Gabba, if it had been written by Chris Morris. Overly joyful keyboard flourishes are mashed with jaunty bass and some seriously dark, yet absurdly hilarious lyrics that lampoon revolutionaries. At the more edgy end of the spectrum, â€˜I Am The Least of Your Problemsâ€™ is 2 and a half minutes of feedback-laced, gnarly punk rock. Riffs are grizzled and scrapping, whilst each incredibly dark lyric (â€œIâ€™ve got things to say in a plastic voice that I learned on the way to hellâ€) is spat with the appropriate amount of venom and distaste. Andy Cairns would be proud of this amount of scrawling noise and disgust.

See also ‘Robocop 4: Fuck Off Robocop‘ which not only wins song title of the year, but makes you think what one question you would ask dead celebrities…what’s your favourite film? Words don’t do this justice…the whole track rules HARD, from the forcefully punctuated staccato structure, to the Johnny Depp-baiting rant, to the big, fuzzed out rush of disjointed noise at the end. Just watch the video and listen you fuckers.

Thereâ€™s something to be said for a big rock ending and â€˜Notes Achieving Orbitâ€™ manages that. The ever-rising crescendo of that synth being pushed beyond a reasonably comfortable listening level, along with one of the best opening lines to a song ever, not to mention the huge, majestic foot-on-monitors epic-air-punch of the chorus, means that â€˜The Plot Against Common Senseâ€™ is another triumph for Future of the Left and their best and weirdest album to date. Why not do yourself a favour and buy it. Absorb it. Live it.