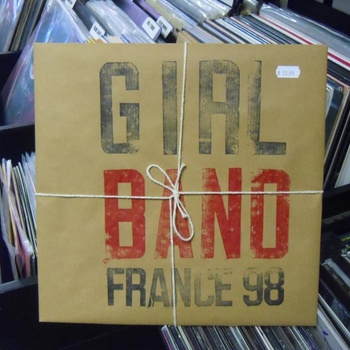 –
Possibly not a tribute to that great footballing event that happened 15 years ago that I have a coffee mug for â€“ hey, thatâ€™s probably worth a few bob now.

Girl Band hail from Dublin and â€˜France 98â€™ is a sinister and warped trail of distortion, disapproving sneers and the middle finger. I like how uncomfortably ominous each track sounds. From the cacophony of snarling guitars that make up opener â€˜Youâ€™re A Dogâ€™ to the frantic barrage of quick-fire strumming of the speed-punk title track; â€˜France 98â€™ is part Therapy? attempting to be a grunge band, whilst a maniac wails his head off just outside the recording studio.

Speaking of recording, some of these songs sound like 3 takes straight to tape in a garage and fuck it if anything goes wrong â€“ top stuff guys; the raw, brokenness and slovenly snarl is refreshing and somewhat comical.

â€˜Youâ€™re A Dogâ€™ contains this grinding riff that grows louder and more menacing as the song progresses, while the somewhat buried vocals are spat with a careless disregard and sound like a threat on your life, even if their execution is also dishevelled and dilapidated. Similar to METZ; Girl Band ramp the uncomfortable levels up alongside the volume and itâ€™s delightfully evil.

The beginning of â€˜Busy At Mathsâ€™ struts along at a lazy gait, but still sounds engaging â€“ especially when the discordant guitars kick in, howling and scratching the song to pieces over the repeated chant of â€œfast and slow, fast and slow, fast and slowâ€¦â€ which is delivered with a charmingly neutral-planet style shoulder-shrug of â€˜who cares?â€™

Whateverâ€™s going on during â€˜That Snake Conor Cusackâ€™ is somewhat of a head-fuck. The swirling over-driven guitars, churn, lurch and rollick with gut-wrenching precision, whilst permanently slamming on the overdrive pedals whenever they get the chance â€“ i.e. for the full 4 minutes and 11 seconds of this particular track, especially the swirling implosion at the songâ€™s coda.

Title track â€˜France 98â€™ is a breathless party smasher of Wives-style punk rock, flooded with feedback, whilst â€˜Second Oneâ€™ features a wonderful roar of â€˜HEY!â€™ and reminds me very much of Mcluskyâ€™s â€˜Alan is a Cowboy Killerâ€™, for all itâ€™s disturbing quietLOUDquietWHATWASTHAT dynamics and its mocking tone.

â€˜Handswapsâ€™ lays on the distortion a bit more on a song that drifts at a dream-like, sleepy-pace, but a sleep thatâ€™s interrupted by someone operating a power-saw near your ear every time you successfully drop off. The persistent, eerie guitar whines give a nod to noise-pollution agents, A Place to Bury Strangers, whilst still manages to shift dramatically into a passages of tuneful tranquillity, despite its dark and brooding nature.

Fans of stamping on big fuck-off distortion pedals, leaning your guitar up against an amp whilst itâ€™s turned up to 11, looking over your shoulder whilst running away from something and being a jerk will find â€˜France 98â€™ just the racket theyâ€™ve been waiting for â€“ strongly recommended. (Itâ€™s also free to download from their bandcamp.)