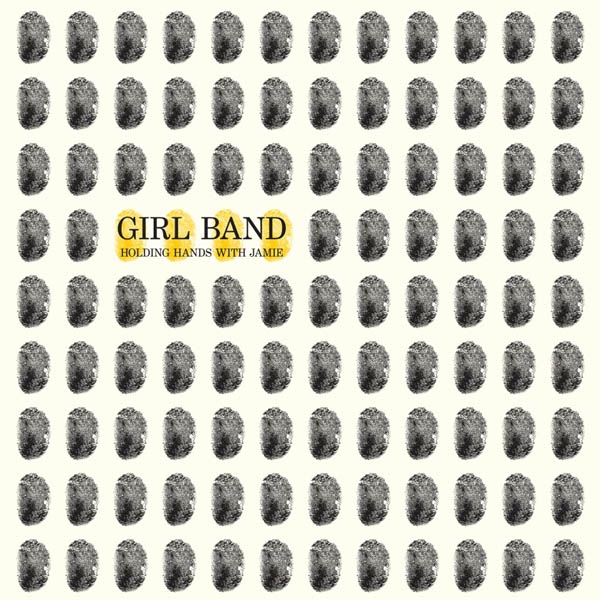 Whether Girl Band have entered some competition with the entire world to be the weirdest band, it looks like they’re on to  a winner. A head scratcher if you will – here’s a band who switch from a buzz-saw guitar scrape (Lawman) to purging fury (The Cha Cha Cha) to a techno-mega-meltdown that sees walls and walls of amplifiers condense into a sticky, molten mess. Holding Hands With Jamie (named after producer Jamie Hyland) is the debut album from this Dublin four-piece, who have finally committed their minds to tape to bring us nine new tracks from their warped world.

If you’ve been familiar with Girl Band’s work – any similarities to their France 98 EP of 2013 have been taken outside and fed through a wood chipper. Signs of madness can be seen in the Early Years compilation EP, which brought together the caterwaul that is De Bom Bom and that Blawan cover, alongside the aforementioned Lawman and The Cha Cha Cha. Holding Hands With Jamie takes things a step too far and keeps going, laughing maniacally, trailing a huge splatter of gasoline behind it, whilst repeatedly trying to get a spark from a lighter.

I can quite believe that Girl Band used empty bottles as plectrums to get certain distinctive noises and hubcaps instead of snare drums – it’s fitting with their aural assault, which is dysfunctional, barbaric and estranged. Um Bongo stretches its horrific smile wide over a canvas made up of churning, hammering, drum patterns, a see-sawing riff that flits between scything menace and a wall of screeching, dishevelled feedback for nearly 2 minutes before the words “got into a scrap with a pigeon” are mumbled by a lost, frightened voice, that is oddly hollow and possibly misleading. Actually scratch the ‘possibly’ part completely – the wall of bludgeoning noise that then follows, is an industrial breakdown of the mind as the words “chicken fillet roll” are chanted over and over and over amongst cries of “I don’t know.” Everything is utterly fucked and that’s only the first track.

Holding Hands With Jamie is a relentless sonic purge of insanity dressed up to look like music..

“I look crap with my top off” slurs vocalist Dara Kiely on the oddball theatrics of Pears For Lunch – his nonchalance makes it appear as though he turned up to record his vocal take drunk as a skunk, powered through the 3 and a half minutes then went outside and emptied his guts. There’s an almost disco-beat to this garbled crash of churning bass-driven sludge. Non-sequitur lyrics are spouted left and right: “garlic, curry, cheese, chips” chants Kiely and the bizarre mantra “looks like an Art Attack when titled from a shelf…” – whether there’s some deeper meaning here, I’m not sure but his frenzied plea of “I don’t know what she wants…” seems to reference a strained and fragmented relationship. Quite apt when you consider the pulverising and disgruntled coda stumbles to a belching, retching conclusion. Watch the video for the full effect.

Baloo is all over the place – berating a cat for shitting in the neighbour’s garden – tongue-in-cheek puns are married to an off-kilter beat that is deliberately jaunty in places, but has that brooding darkness hidden behind a fake smile. The last 2 minutes seem to almost morph into another song – as though the original has been turned down to be replaced by another track that sounds like it’s being played backwards, such is it’s slovenly, meandering gait and nonsensical structure (chords weaving in and out, stabs of wild, mangled noise, Kiely shouting nonsense just because he can). Just what is going on? Not even the next track, In Plastic, can explain that. It’s Girl Band’s take on a ballad and it’s too fucking creepy for words – “smooth like, smooth like an action man” croons Kiely as Alan Duggan’s guitar and Daniel Fox’s bass fight for control (those water bottle plectrums perhaps?)

The alienation continues – lead single (and contender for track of 2015) Paul, is beyond levels of bleakness. It bleeds torment and the beginnings of a full on psychotic episode from every orifice. At nearly 7 minutes it doesn’t outstay its welcome – there’s so many layers to this, from Fox’s sombre creeping bass line, to Kiely’s disenchanted sneer of derision, to the crushing and destructive rend that pours forth. It starts to transcend what your brain calls music and creates something that staggered from some dimensional cascade. Credit to Kiely for the falsetto around the 4 minute mark (and also his whole tone, vocal ticks and mannerisms during Paul and even, the entirety of Holding Hands With Jamie) – backed by Duggan’s guitar, which creates a banshee-like screech of torment; but it’s the last minute and a half, where Girl Band batter you though a nauseous, wrecking ball of unpredictable techno-mayhem and debauched misery that really sticks out. Never mind through the looking glass, we’ve melted it down and injected it into our eyeballs.

“Give it to me straight like a pear cider…” chants Kiely (channelling Stewart Lee) on The Last Riddler recounting a cathartic (and real life) desperate trip to the doctors. Built around a meandering, scrawled bass, tribal drum smashes (courtesy of stickman Adam Faulkner), fizzing guitar screeches and Kiely fucking losing his mind he still gets a chance to ask Doc Murray “D’ya reckon Batman and Robin ever kissed?”  Eighty one seconds of a mind looking for help and splintering apart over raw, demented punk rock. Texting an Alien keeps the possible ‘reality’ in check, with a monologue relating to throwing biscuits down a street and wearing Lynx Africa, whilst the hollow chimes of the guitar drag everything along to a sudden cut-off.

Fucking Butter recounts an eventful trip to the shops, if the shop was currently on fire. The industrial/techno elements of Girl Band’s corrupted sound are at the forefront here, leaking distortion and deviant spite. Vocals are spat from a corrupted mouthpiece, amplified over the crude, instrumental barrage that switches from bass-heavy rumbles, to stark percussive beatings. The chant of “NUTELLA NUTELLA NUTELLA NUTELLA” reminds you that there’s some bizarre in-joke here that you’re never going to get, but you might as well go along with it.  Girl Band round things off with the kaleidoscope of revolving bedlam that is The Witch Doctor, which thunders past through a near-buzzing wall of unintelligible sound (especially near the end) and screams of “I’M WEARING A WOMAN’S JACKET JUST TO MIRROR YOU…” over and over and over.

Holding Hands With Jamie is a relentless sonic purge of insanity dressed up to look like music – congratulations Girl Band, you’ve won. Sidenote: having read the lyric booklet, nearly every song references food at some point. Lovely stuff. Buy it now.