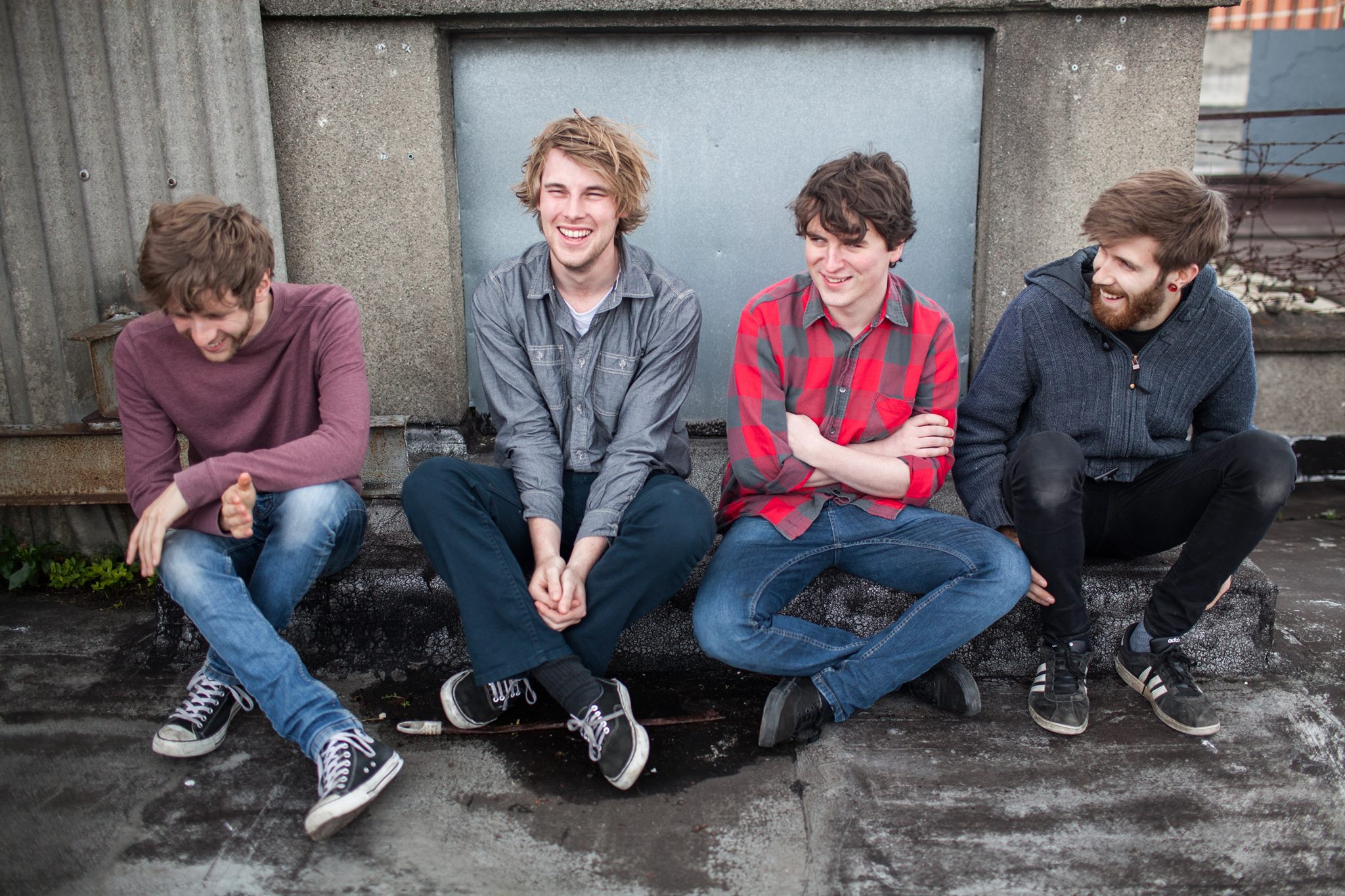 Due to poor timing (and getting lost – with the 50/50 decision to turn left or right out of Tottenham Court Road tube, I chose wrong, hey they say 90% of the time you get 50/50 wrong) I arrived at the 100 Club 15 minutes into Prom’s set. Their triple guitar attack is discordant, shrill and ragged – cutting an impressive and intimidating screech. Vocalist/guitarist Angela Won-Yin Mak switches from subtle croons to full on riot-shrieks over Prom’s wall of dark, slacker-surf rock. There’s a bit of that Swami-punk sound thrown in for good measure – solid.

Opening with the hammering feedback debauchery of Um Bongo, (the first track from Holding Hands With Jamie) Girl Band launch head first into this 13-song packed set with urgency and unhinged lunacy. Despite vocalist Dara Kiely still suffering from a bad leg, he manages to writhe and hobble around the stage, progressively descending into a sweaty, dishevelled mess of a man, but still utterly captivating. If eyes aren’t on him, they’re staring at guitarist Alan Duggan, marvelling at how a man creates that sound, or bassist Daniel Fox, who sounds like he’s dismantling his instrument with a press drill.

They rip through Heckle The Frames with insane speed – a trashing, 90 second bombast of spitting, fuzzed-out punk rock; Kiely screaming his head off, gripping to his make-shift crutch mic-stand. A bit later on. someone from the crowd shouts “how’s the leg?” To which Kiely grins and replies “shit!” In Plastic is introduced as “a slow one” which should translate as “an even weirder one” and has the whole crowd swaying along, like some eerie post-noise ballad, through a twisted portal of overlapping scrawling riffs. Current single Pears for Lunch goes down an absolute storm; the cry of “I look crap with my top off” should be cemented as one of the greatest lines committed to tape this year.

As Adam Faulkner begins to pound out the steady drum intro for Lawman and those disgruntled bass hums and guitar scratches begin to take shape, a frenzy is gradually building. Halfway through the song, someone turns to me and shouts that I should be near the front. I am at this point, screaming the lines “everything about her was contagious…” into the back of this poor person’s head. As the disturbingly morbid bassline for Paul builds and builds and everyone starts crowing out the opening line about not asking about the bleached moustache, you can hear just how note-perfect (if that makes sense) Girl Band sound live – every tiny scrape, shudder, noise, dropped chord, crashing cymbal, oddball yelp is finely replicated in the live environment, showcasing just how tight the band are, even though they sound like they’re fucking about, destroying their equipment as they’re playing it. (I swear during Paul, Duggan was just stroking his guitar strings at one point) It all comes down to the furious punishment of The Last Riddler, where they even squeeze in the ‘D’ chord (that they threw in for comedic purposes according to a Radio 1 session I heard a few weeks back) in the block of gurgling noise that opens this frothing boiling madness of a track. On Fucking Butter, everyone is chanting “NUTELLA! NUTELLA! NUTELLA! NUTELLA!” completely appreciating and praising the chocolate-nut delicacy to its full.

After seeing Girl Band rip through Blawan‘s cover of Why They Hide Their Bodies Under My Garage, the techno artist should sign all the rights to that song over to this Dublin quartet immediately. They pummel and brutalise this track into oblivion – Kiely is by now a sweating, mesmerising wreck who throws himself (as much as he can, remember, bad leg) into the track chanting the songs title like some hideous and ominous mantra. Of course, the place goes mental. It’s near 8 minutes of bizarre, misleading techno-destruction and it sounds absolutely phenomenal. “We’ve a couple more left” gasps Kiely, staring wide-eyed into the crowd before Girl Band bash through the 25 second thrash punk of The Cha Cha Cha and close with the spiralling mind-bend of Witch Doctor, which descends into a maelstrom of turbulent, clustered noise, Duggan, Fox and Faulkner laying waste to anything approaching a tune, whilst Kiely screams about wearing a woman’s jacket and gay soleros. Rome (and the 100 Club) have been burnt to the ground during some pulsating, apocalyptic rave of hedonistic destruction.

Hands down, Girl Band are the best band I’ve seen this year – an incredible, acerbic and intimidating performance.

If you haven’t already, pick up a copy of Holding Hands With Jamie and book your ticket to one of their dates next year.