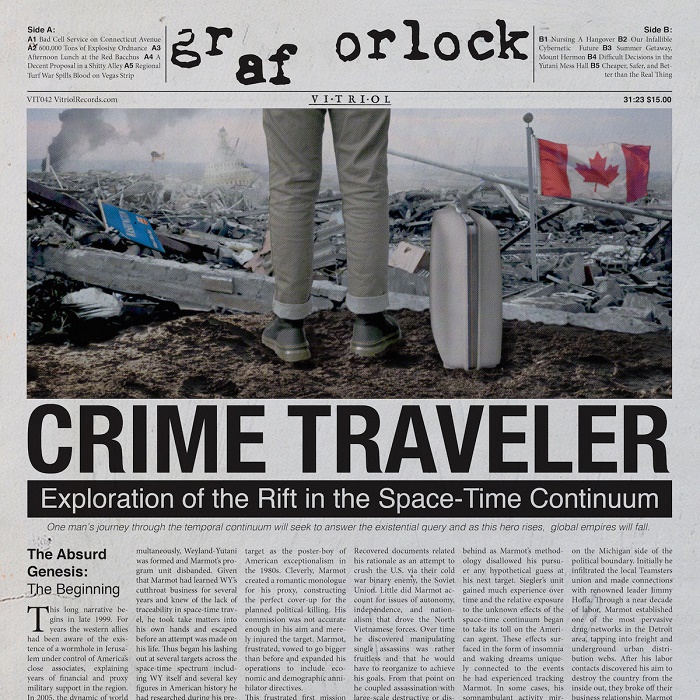 “Exploration of the rift in the space-time continuum.”

Three months behind? Eh…go fuck yourself, this is my website, I can write reviews when I want. This is appropriately late anyway if you think about it…really. Who are Graf Orlock? A bunch of mad bastards making cinema-grind (i.e. all songs are about various action-films, through a mixture of lyrics, song titles and even clips from the films). I spoke a bit about them here, ranting on about how great they are (true facts) – I mean, any band that can combine a Jeff Goldblum quote and the Jurassic-fucking-Park theme into a breakdown is solid gold.

Crime Traveler is about a time-travelling French-Canadian assassin who commits environmental and political espionage to bring down the United States. That’s cool; sign me right up to that shit pronto. Stretched taunt over a 31 minute running time, Graf Orlock, brutalize and pulverise their instruments through an apocalyptic barrage of seething grind. They also reference tons and tons of other films as well (Arnie gets some terrific shout-outs) nothing is safe and neither are you from the Orlock attack.

The shrill ring of a payphone cuts through first track, Bad Cell Service on Connecticut Avenue, along with some marching drums. “Hey fuck-face, look lively” is snapped at what sounds like a simpleton, followed by some orders to “smoke Reagan” – then the drums hit. Holy shit, do they hit. Blast-beats out of nowhere come crashing down, raining blow after blow as the snarling vocal roar gurns and rips through, followed by the raw slab-heavy hardcore that pummels and breaks the skin with breathless, thrashing energy. We’re treated to some red-shirt stoners wanting another hit on the splatter-gun 60,000 Tons of Explosive Ordnance, a track I’ve previously described as “sledgehammer grind-math-metal.” “Cleanse this you fuckin’ stain” spits our protagonist, laying one of these “trust-fund assholes” out in one hit, right on the cue of the drumbeat. The hydra-head vocal attack of the gruff-shouty one and the shoutier-gruff one snap, snarl and spit toxicity in every direction, as this jerking hardcore assault barrages forward.

The doom-metal lurch of Afternoon Lunch at the Red Bacchus, sets a stark and evil tone, that bubbles forth into straining, finger-bleeding thrash and the overall guitar-tone is a lot darker, laced with morbidity and a sorrowful wail, unlike the usual macho-power violence throwdown. A Decent Proposal In a Shitty Alley is the exact opposite of the preceding track; it’s crushing beer cans into its head, it’s thrusting itself at everyone in lurid, disgusting ways, it’s expelling undigested, cheap alcohol from every orifice. Guitars are coated in grime and filth, as riffs fall and splatter like giblets from a great height as this gritty, blood-thirsty sludge-rock batters home in all its disgusting and mangled glory.

Incredible intro alert on Regional Turf War Spills Blood On The Vegas Strip (let’s say shotgun blast, screams and the line “I’m starting to like this place…“) as this rushes past with incredible, incandescent fury and bludgeoning speed, before abruptly ending with the solemn and morbid chime of a piano. Confused? Yeah, well, it’s Graf Orlock mate, nothing can be predicted here. Nearly a full minute is taken up spitting anger at the Exxon Valdez crisis on Nursing a Hangover; at the 51 second mark those drums rain down a storm, signalling the fractured and bone-splintering (and boat-destroying) hardcore punk attack. Arnie makes a cameo (“negative.“) on the Terminator–influenced, Our Infallible Cybernetic Future, as machine-gun fire lights this track up, sandwiched by some groovy, posturing breakdowns and biting dual-vocal trade-offs.

Best-film-ever, Aliens is even more referenced than Graf Orlock’s actual song about Aliens on the hilarious Difficult Decisions in the Yutani Mess Hall – “GRAB SOME PULSE RIFLE ROUNDS!” is perhaps the only barely-audible lyric, during this punk rock slam-dunk of chaotic, space-marine worship. I even think the word “BISHOP!” is screamed at one point. “Hello, I’m Johnny Cab, where can I take you tonight?” and talks of “Go back to fuckin’ Mars” are slapped all over final track, Cheaper, Safer, and Better than the Real Thing as we’re transported through the worm hole into a land where power-violence is king. This churning boil of scatter-gun riffs, screaming guitars, brachiosaurus-drum blasts and mouth-frothing screams, flays and boils with purging, vicious contempt and is one of the best metal-meets-hardcore tracks you’ll hear all year. The last minute and a half of eerie piano chimes and the sound of clacking keys is a somewhat relief. Has our mysterious Canadian assassin completed his quest?

Also, special note to all the samples on this, which (are all made by the band for their real/fake movie) I assume have been recorded to be deliberately cheesy as a pastiche of late-80s early-90s action dialogue and are utterly superb in every way.

The vinyl release for this comes with a 10 page full-colour newspaper about the album’s entire concept. That’s commitment to art, and this is the kind of art that goes back in time and sets the concept of art on fire whilst running it over with a tank. Stream Crime Traveler below and buy the 12″ from Zegma Beach Records here. Best album about a time-travelling Canadian ever.