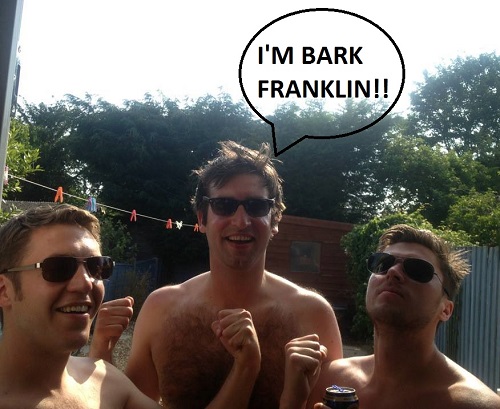 Sometimes a great man comes along – a true inspiration to us all. He’s suave, witty, intelligent, handsome and charming. Also, there’s Jack Murray, who has selected his top 10 albums of 2014. Hey, he did it for 2012 and 2013, so there’s no reason to deny him the chance of sharing his knowledge, wisdom and bark-related puns with the rest of the readers. Woof, etc.

Not strictly an album as it’s only 7 tracks and 20 something minutes in length but I’m including it anyway. This is some fantastic catchy yet slightly off-kilter alt-rock. What else would you expect from the Irish lads(now a 4 piece).

Listen to: Another Meat Industry

This debut album from the Atlanta 2 piece is loose, raw as fuck and full of live improvisation. Imagine Nirvana and The Bronx punching The Black Keys in an alleyway.

Steve Brooks of Torche returns with his former band’s first album in over 10 years. This album is packed full of riffs heavy enough to make you shit your pants all topped off with Steve’s unmistakeable croon.

Another debut from a 2 piece, this time from our own shores.This brings to mind Queens Of The Stone Age meets Muse (when they liked guitar riffs).

Listen to: Out Of The Black

The 4th album from the Swedish fuzz mongers finds the band spreading its wings and venturing into more prog-rock territory than before; especially on the near 14 minute epic Mastodon’t.

Another Torche man! This is from second guitarist Andrew Elstner’s other band. This is their second album and it’s full of party anthems in the vein of ZZ Top and Van Halen, but with a modern edge.

Another stonking album from the ever prolific master of the chorus. This as ever includes more different styles (often in the same song) but still manages to sound like the man himself.

One place higher is Ginger’s sidekick CJ. This is his first solo album in 7 years after taking some time out from music. This collection is loaded with simple yet affective pop rock.

Listen to: State of Emergency

2. Mastodon – Once More ‘Round The Sun

This is their 6th and in my opinion best album. It picks up from where The Hunter left as well as ever evolving their sound.

Listen to: The Motherload

This might be the best debut these ears have heard in 10 years.This is emotive rock of the highest order (more emo than emo could ever be). All topped off with stunning vocal performance from David Jakes. These Cambridge lads are going to be huge.

Listen to: Call Of Horses