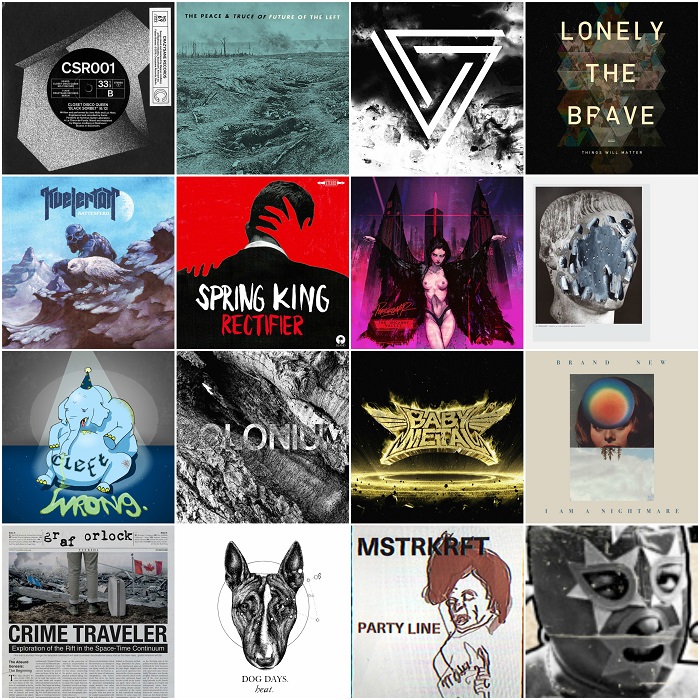 As we reach the halfway point of this bonkers year, it’s time to recap on some of the best tracks/noises/sounds/farting through a walkman we’ve heard at Keep It Fast towers this year. Join us on this voyage, where I sort of repeat stuff you’ve perhaps already read, but that doesn’t matter as we’re just killing time at the moment.

Drummer Luc Hess and guitarist Jona Nido are the two parts that make up instrumental noise-makers, Closet Disco Queen. Together they are an exhilarating thrill ride, especially on the prog-rock rip of Black Sorbet, which sounds like Fang Island high-fiving OXES. This will make you want to twirl a guitar around your head like some kind of mad, musical instrument-wielding neanderthal, whilst beating your chest with your free hand just to keep up with the punishing rhythm. Ultimate speed-rock party jams that breaks the 6 minute mark, yet never feels boring and so refreshingly vital with each new listen as it cleavers its way onward.

It could have been any track from Future of the Left’s Peace And Truce… really, but this one clinches it, mainly due to the brilliant opening line: “If 20 therapists want to tempt me with their tit-rings, they should know that I own a werewolf and the sense to use it…” and the bending, cerebral-burrowing bass gurgle that will infect your mind in a matter of seconds. It should also be noted that the drums on this are the most FOTL-drums ever recorded. Off kilter? They’re drunk as hell.

When not screaming over ludicrous time changes and shitting in bags, Greg Puciato, the man-mountain of Dillinger Escape Plan makes some of the best dreamy-electro-pop you’ll hear this year. The range he has is staggering, especially the Timberlake-esque falsetto on this track; which flirts and teases, whilst the instrumental pairing of Joshua Eustis and Steven Alexander create a glitch-ridden industrial hammering that perfectly compliments the sassy delivery that’s on offer here.

The continued progression of the brilliant Lonely The Brave is something I’m enjoying at the moment. Two albums under their belts, a new found confidence in vocalist David Jakes (he stood at the front of the stage last time I saw them!) Strange Like I is a fuzzy, three minute blast of emotive, scuzzy punk rock that will hit the raw nerves but also make your heart swell with hope and a lust for that mid-2000 emo revival.

There’s lots of things to enjoy on Nattesferd, the title track from Kvelertak’s third album. The rough-shod production, acoustic guitar twangs spliced with the heavy metal tomfoolery, female backing vocals on the chorus, the cheese-factor 11 of the huge driving force of  the southern-rock swagger that it slowly morphs into and of course, not understanding a word of what vocalist Erlend Hjelvik is saying, but loving every moment of it.

There’s something brilliantly infectious about Manchester’s Spring King – positivity radiates from their music and their energetic bounce, led by the powerhouse in the form of drummer and vocalist Tarek Musa, they seem to love what they do. Okay, so they’re not the most original, but their indie-punk quirk and this Clash-esque joyride of hopeful optimism in the form of Rectifier bristles with warmth and a huge skyscraper of a chorus, which these boys seem to be able to write in their sleep.

When you make the kind of electronica that’s heavier than a lot of metal bands, you know you’re on to winner. Neo Tokyo is the first track off of Perturbator‘s new album, The Uncanny Valley and the fury, the pure aggression that’s channelled into this opener is stunning. Perturbator teleports back like some kind of cyberpunk guardian, pounding out a destructive and crushing rhythm that never lets up, manipulating his melodic synthwave to consume everything, whilst every now and then, setting free the shrieking moments of squealing code to make sure you know he means business. Heaviest track of the year so far.

Head Wound City – I Cast A Shadow For You (Vice Records)

Maybe not the most immediate of tracks from Head Wound City’s A New Wave Of Violence, but this one has stuck for some reason as a stand out. Maybe it’s Jordan’s vocals, which are at their most sassiest and flamboyant, whilst this dark and grim sounding post-punk trip flits between moments of despair and stabbing, bludgeoning hardcore. Also, probably the most Blood Brothers-esque track on offer to be fair. Thumbs up.

You want riffs? Cleft have gone some spare ones. Only joking, they don’t, because they’re too busy ripping them out at a ridiculous speed. A two piece, who are sadly splitting up after finishing off a string of shows, are a heart-racing onslaught. This disjointed, scything chew of instrumental turbo-charged rock is beautiful in every single way; from the prog-rock mash of the opening stabbing chords, to the cheering and whooping during the drum solo around the mid-point. A vibrant explosion of sound.

Good grief. Eradicating any hope of happiness again, Polonium put several rounds in the back of the head of everything being ‘fine’. Nebbish plays out like some grisly kidnapping (reading into vocalist Justin Foley’s words is a harrowing experience), stark, bleak and morbid to the very core. This hacking, crunching slab of meaty sludge-metal-rock drags itself through 5 minutes until it reaches its macabre conclusion and Polonium are grinning all the way – cracking stuff.

Originally, I’d chosen lead single Karate, but there’s something compelling about BabyMetal‘s  Awadama Forever. For one thing, former Mad Capsule Markets bassist Takeshi Ueda composed the music around this track – the explosive sunshine riffs and techno-speed-punk delight this radiates is staggeringly good. There’s even the Amen-drum break thrown in for good measure (hello Pulse) and it just utterly rips hard alongside the detuned guitar squeals and carries that huge grinning foxhead of delight that BabyMetal tirelessly radiate.

Brand New – I Am A Nightmare (Procrastinate! Music Traitors)

As stated here, a month on and I still have no idea what Brand New are doing to us all. Channelling the upbeat pop-punk guitars of their debut, I Am A Nightmare is laced (you see what I did there?) with the morose and morbid tone of the three albums that followed Your Favourite Weapon, yet this is the track people will be screaming themselves hoarse on when it hits Brand New’s setlists.

“Some serious shit must have gone down for you to run a giant fuckin’ ship into a very visible reef for no fuckin’ reason, you’re fucked!” Really don’t need to say much more. Graf Orlock rain down and I mean, it’s an absolute hailstorm of pulverising drumbeats, savage razor-sharp riffs, guttural vocal belches, roars, screams and the sound of running around on fire. This is the spectrum of hardcore that’s ripping itself in two with pure frustration and chaotic fury.

Oh god, help me. MSTRKRFT’s Party Line is the absolute fear. When you can draft in Ian Svenonius of National Of Ulysses to add a creepy monotone over this wall of every-rising, punishing, distorted and harrowing noise you know that things are getting ugly. Weirdly though, this mash-up of styles fits so well together, that it soon becomes normal and less creepy, evolving into a stone-cold party banger. Still oddly terrifying at various moments though.

*Beats chest* yes! This is the shit we need. Dog Days are a Swiss instrumental stoner rock band and are all about the grooves, especially on the opener from their album Heat in the form of Saluki, which mixes Truckfighters-levels of fuzz and gnarled, crusty distortion, with the mean sneer and ripping caterwaul of Karma To Burn and some seriously pounding drum patterns thrown into the mix.

Listen to nearly all the tracks below and some extras for good measure: