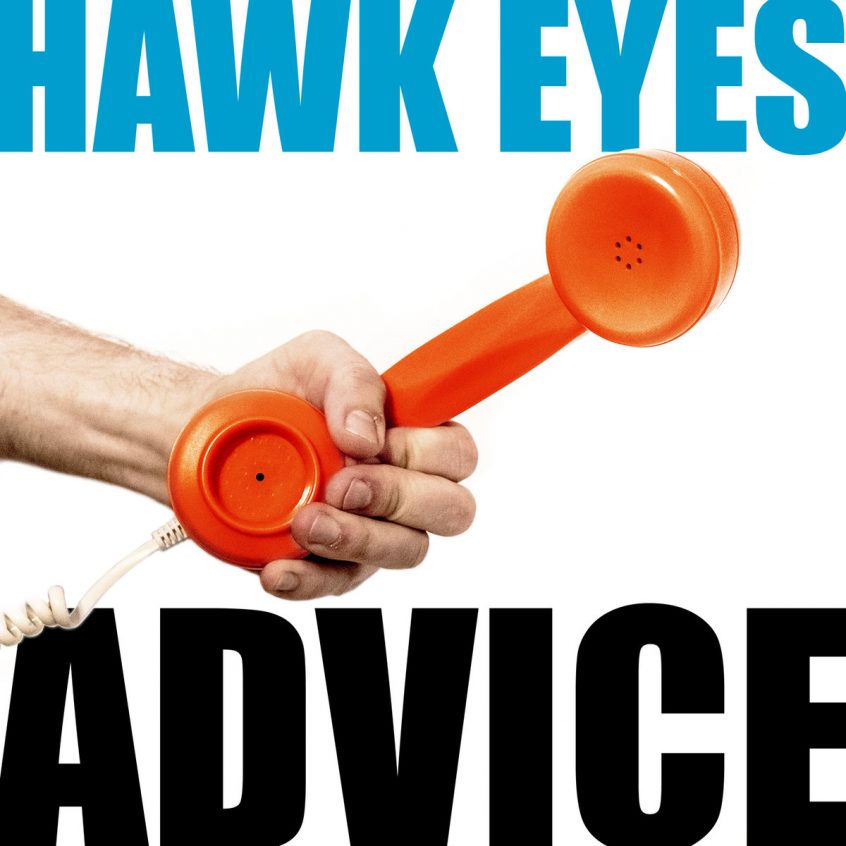 Things were very quiet in the Hawk Eyes camp since the release of 2015’s Everything Is Fine – with talk of the album finished back in 2017 and long periods of memes, championing Scottish grindcore comedy bastards, Take A Worm for a Walk Week and flogging old merch, the feeling was, “would we see a new album at all?” Of course we would, dummy. Advice is the fourth album by the Leeds foursome, and the first featuring new drummer John Mackenzie, who replaces Steve Wilson.

First thing, this is a strong departure from their earlier work. The screaming and Patton-esque yelps of vocalist Paul Astick are all but a distant memory, instead, Advice relies more on Hawk Eyes being able to craft these huge, monolithic-sounding tracks that will burrow their way into your brain and never leave. Opening track Royal Trouble, sets it’s authority with this pompous, and booming bass drive and feels so life-affirming, so triumphant and operatic, it’s the most flamboyant Hawk Eyes have ever sounded, especially opening an album; yet the crunching, scratching guitars still give it that edge, on this emphatic pop-tinged chorus. The tone of “flex my royal muscle/and do what you’re supposed to do/because I couldn’t give a damn what you think…” cements the overtly but subtle political undertone that sneers and raises the middle finger at the current climate.

I’ve always felt there’s a Deftones-vibe running through Hawk Eyes, and this is confirmed on the brooding shift of Follow Me; the wall of fizzy, yet menacing guitars hit like a wave, whilst the twinkling code-like descent of the harmonies falls delicately from the initial wash of sound. The riff around the 2:10 mark slams down hard with White Pony-esque force and this bubbling goth-lite whoozing sorrow.

Current single, Never Lead Me is contender for the best track they’ve committed to tape. From the opening, chunky nu-metal riff, it slams hard like a fist brandishing an orange receiver,bubbling with hate. With subject matter of bodies in the back room, tampering with breaks and spilling blood, there’s an evil streak on this riff-machine of chewing malevolence. Astick sounds particularly defiant to the end with his buried-vocal cry of the song’s title track on the chorus and when the second guitar comes in on the punishing closing 40 seconds, it sounds phenomenal.

A clear example of how exemplary the hooks and song writing ability is on Advice comes in the form of Perfect Again; the chorus is one most noise-rock bands would kill for to add that sweet, melodious flavour to their destructive riffage (too bad Hawk Eyes have that locked up), coupled with the bright, incandescent chorus that screams triumph, rebirth and return in the form of Astick’s wailing cry of the track’s title. It absolutely roars with achievement, goodwill and beauty.

Will you start the fans please! Smokes, featuring non other than Richard O’Brien, delivering a deliciously sinister monologue (in only the way he can), is the surprise on Advice – being both unusual and certainly inventive, it adds this nervous uncertainty to proceedings, especially the way the “Weeelllllll…..” drips out of your speakers. Destined to be slammed on a variety of Halloween playlists, Smokes is by no-means a novelty; the stocky bass thump, coupled with Astick taking lead on the chorus, it’s soaked in trepidation, sweat and shivering menace.

Tracks like the noisy mire of State of Opposition paints a fearful picture of abusive tyrants in power, through claims of “the new golden boy shakes his victory toys” whilst the sustained guitars carve out this shuddering, despairing sense of anxiety and worry, ending in this rumbling slab of disorientating, belchin, angry feedback.

Sadly, Keep ‘Em Cold, doesn’t seem to be about cold beverages, rather the macabre practice of storing bodies in a cool resting place. There’s a strong Shirley Jackson-vibe to the lyrics interwoven on this, that feeling of unease and creeping dread, of being paralysed by fear, waiting for the inevitable with the infectious chorus of: “This I can change/why would I want to/it’s just another way of keeping control/it’s just another way of holding us back/keep ’em cold“. Coupled with the excellent Faith No More-esque bass twang lead, this final track shoulders in some excellent dance-grooves, especially through the rolling drum fills and the shredding howl of the guitars to create this complex, genre-bending mash-up of dark, mesmeric alt-rock.

“Here’s my advice/try listening” spits Astick on the album’s moody and insolent title track and you should all be listening to him. This is exactly the album Hawk Eyes needed to deliver and they have exceeded expectations emphatically. Advice is a dark, brooding body of work; an instruction manual of sorts, it’s a concept piece offering guidance, albeit unreliable perhaps, corrupted narrators and bizarre tales of defiance, acceptance and grim determination.

Also, love, LOVE the Unsane-vibes of the album cover, sans blood splattered all over the receiver. Fantastic work.

You can stream/buy/”start the fans please” the new album, Advice, by Hawk Eyes below.