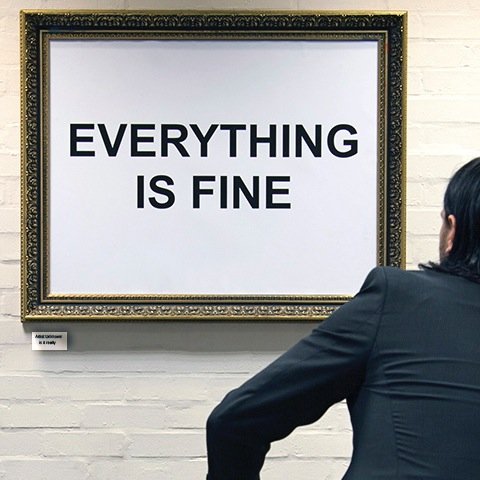 “The sea salt in my hair is annoying now..”

Everything Is Fine. It’s not though, is it?  Hawk Eyes are far from smiles, rainbows and fuffy kittens on this, their third album. That’s not to say this is all misery and sadness – there’s no time to be miserable, not when all your feelings can be tightly compacted into seething malevolence, stretched over the 46 minute running time that this Leeds four-piece uncomfortably take you on. Whatever harrowing, blue-screen-of-death journey they’ve taken since 2013’s That’s What This Is EP then I feel quite fearful for their sanity, but thankful that they’ve harnessed that morbid trip and channelled it into this seething, spitting, slab of bile that sits in front of me.

Opening track, The Trap (an ode to Admiral Ackbar) is the wad of money tied to a string dangled in front of you. The somewhat ambient score leads you in via a post-rock hum before erupting in some formidable, tribal drumbeats. The vocals are whispered through another world – they transcend our own, but feel alien – ruined and racked with sorrow and mourn. The chorus is oddly melodic, channelling huge And So I Watch You From Afar-style sledgehammer riffs, over this soft, mellow croon of “I have nothing left, I have nothing more…” You’re suckered in though – the switch is flipped and the room descends into darkness -the guitars turn ugly and begin to decay, as the vocals become more caustic. That’s just track one.

There’s currently no bands that sound like Hawk Eyes on the circuit – they’ve somehow crafted and perfected their bonkers psychedelic noise-rock to a point when they truly do stand out ..

The Ambassador is a mad-eyed, scrawl of scribbled, twisting guitars, math-rock drum patterns and delirious preacher vocal tics. “I’m sick and tired of our hosts’ exquisite taste!” spits vocalist Paul Astick, who, is clearly having an absolute ball, channelling his inner Greg Puciato through a barbed, calculated stream of crazy ramblings. First single, Die Trying, is an early indicator of Hawk Eyes stepping away from the sound they’d built up on Ideas completely. The layered, spoken-word vocals are an eerie, desolate chant – whilst the prog-rock guitar fury is akin to that of Mastodon – bludgeoning, bruising layers of meaty riffs and reverberating drum beats; all sound-tracking the grim tale of what I can only assume is body disposal in all its grimness. To counteract this, Permission channels belligerent and snarling metallic punk rock with boiling, acrimonious venom. Vocals blend and spasm from throat-aching screeches, to flamboyant crooning, whilst this razor-sharp thrash-rock attack roars past, not letting up, even during Astick’s red-faced screams of “GET A GOD!”

In an odd change of pace, soon-to-be-new-single, The Ballad Of Michael McGlue is surprisingly upbeat (despite it being about the survivor of a sunken coal steamer from 1902). It’s still dark, there’s no getting away from that – it must be the backing vocal chant of “THEY ALL! THEY ALL!” alongside the rich vocal harmonies from Astick (seriously, this dude has some incredible pipes) and the scrappy hard rock drive. Don’t be shocked by the sudden cut-off ending, which really works when you consider the subject matter. Checking back into weird town – Terribly Quelled mixes abrasive vocal snarls, (“Happiness is a risky business!“) heaped in drama, alongside chopping, metallic chords and a mortifying sense of being followed. The uncomfortable rolling caterwaul of Night Music brings to mind the robot-rock thump of early Queens of the Stone Age, fed through the Coachwhips filter of acrid discomfort and shredding noise. This destructive pace continues on the drastically unhinged I Never Lose – a track that bursts and splits apart with frightening speed and aggression, completed by the bile-spitting lyrics and monstrous howls of strangled feedback around the 2:20 mark. The title track is utterly, utterly, bonkers – a rambling, deranged scramble of alt-metal meets punk rock, with Astick channelling the gargling, mouth-frothing crazy of Mike Patton.

Final track, TFF – is an unusual number, clocking in at nearly 7 and a half minutes, it’s the longest song Hawk Eyes have recorded. It shifts, rolls and splits through different, twisting moments of clarity and insanity. Prog-rock passages, the slab-heavy breakdown of Mastodon, the unpredictability of Dillinger Escape Plan and even the melodic strain of Reuben all punch through, whilst the last 2 minutes are foot-on-monitors euphoria channelled through the Harvey Milk weirdness kaleidoscope of trauma.

Everything Is Fine is a jarring, but spectacular listening experience. Even when you think you’re being given a reprieve (see The Ballad of Michael McGlue) think again. There’s currently no bands that sound like Hawk Eyes on the circuit – they’ve somehow crafted and perfected their bonkers psychedelic noise-rock to a point when they truly do stand out and Everything Is Fine is their best and most insane work. Brutally beautiful in every single way.

(There’s still time to pre-order Everything Is Fine from Pledge Music.)