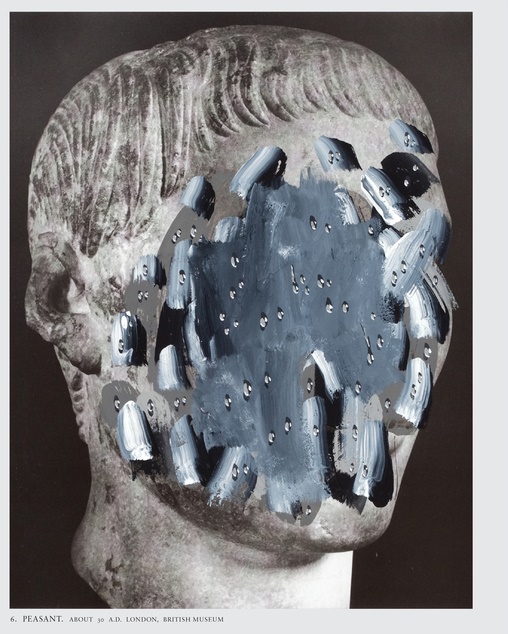 “One last time, love is best.”

There’s nothing like making the audience wait. See Axl Rose and his roast dinners as a prime example. Head Wound City have trumped this though. It’s been over 10 years since they released their debut 7 tracker, a brutal, blood-splattered, caustic attack. Then nothing for ages (although it allowed bassist Justin Pearson to form 800 new bands in that space of time). Suddenly, a video appears then an actual album? Holy shit, this is good news people.

Featuring numerous members of hardcore bands past and present; Jordan Blilie and Cody Votolato of Piano Island-freaks The Blood Brothers, Nick Zinner of the Yeah Yeah Yeahs and Gabe Serbian and Justin Pearson of The Locust fame, Head Wound City have returned to the party and they’ve brought the fun and heaps of destruction ready to kick-start the failing heart.

Being away for so long hasn’t done anything to dampen or restrain the mood in the Head Wound City camp. This is still a spitting, lethal dose of raw, no-frills, rampaging fury let loose over 25 minutes of direct and taunt punk rock. Opening track, Old Age Takes Too Long, begins with the pulsing throb of Justin’s bass, as Gabe’s tribal drum beats begin pounding. An eerie, pulsating hum takes hold, before Jordan let’s fucking rip, joined by Cody and Nick’s razor-sharp guitars. “WOOAHH! WOOAHH!” chants Jordan, as what is more of an intro track suddenly cuts short after just over 2 minutes of teasing, unsettling knuckle-cracking. This is soon followed by the fire worshipping chant of “BURN! BURN! BURN!” on the savage punk rock spittle of Born To Burn, a dark, cutting punk-wave of rolling drums, twitching, schizo-menace and shuddering, disjointed riffs.

A heavy Blood Brothers influence shines on the thirsty, salivating attack of Head Wound City, USA – this almost feels like it fell off of Burn, Piano Island, Burn (also produced by Ross Robinson) such is the madcap, spasmodic churn and breathless punk rock energy that this exudes – it’s feral, spitting and brilliantly antagonistic. Credit to Jordan, who does a superb job of mixing his scream/sung/creepy monotone to great effect on this and even begins to channel the shrill, shriek of Johnny Whitney on the ramshackle thrash-mess of minute-long stormer I Wanna Be Your Original Sin; especially during the squealed chanting of the song’s title on the brief and sassy chorus.

The creepy, film-noir sway of I Cast A Shadow For You, exemplifies what a vital role Jordan plays in Head Wound City. His menacing, echoing-monotone is laced with a jealous, revolted sneer and when he lets rip with his frustrated screams, it only strengths the moments when he suddenly switches back to his brooding croon. This is quickly followed by the saw-blade hack of Scraper, which splinters forth, full of shuddering, malevolent contempt. It’s a macabre and devilishly anguished burst of spluttering punk rock that is vibrant, technical and an absolute rollercoaster ride of fear, excitement and chaos.

There’s such an intimate, intense urgency to A New Wave of Violence – everything is so tightly wound up, like a million coiled springs that are suddenly released, ricocheting off everything with a cacophonous riot of explosive energy and wild frivolity. Tracks like the scathing, dark-edged punk rock stormer of Closed Casket for example and the bonkers Palace of Love and Hate streaks past with all the rabid, mouth-frothing fury of The Locust (funny that…) guitars collide, explode and absorb each other as Jordan delivers nonsensical ramblings like machine gun fire, occasionally spitting the words “LOVE! LOVE!” during this madcap raucous onslaught of breathless splatter punk. “FUCK YEAH!” indeed.

There’s a touch of Every Breath Is A Bomb about Avalanche in Heaven; it must be Jordan’s whispered vocals. The see-saw guitar attack, large-ham vocal chanting, which transforms the ever-changing frontman into some fanatical preacher, lording it over his flock. This doom-edged seethe of spiky, almost industrial metal chime is ugly, barbed and unhealthy brilliant as it reaches a bruising and abrupt crescendo before closing with an eerie pulsating heartbeat.  Final track, the unsettling stranglehold of Love Is Best, feels like the end of everything – the longest song on the album (clocking in at just over 4 minutes) is a mixture of mutilated vocal barks and layers of warped synths painted over the savage, noise-laden guitar licks. This doesn’t sound like any other track on A New Wave Of Violence – it rolls, vomits and churns with a loathing post-punk degeneration of splintering, peeling terror – “one last time, love is best!”

Head Wound City peel the face off of hardcore and punk and stamp it into the curb on A New Wave of Violence – it bites, gnashes, roars and feels like an absolute riot of destructive, unchained power. A strong contender when we reach the inevitable album of the year lists…

You can purchase A New Wave of Violence from their webstore. Treat yourself. Also, make sure to blast their cover of Ministry‘s Just One Fix; it’s a belter!